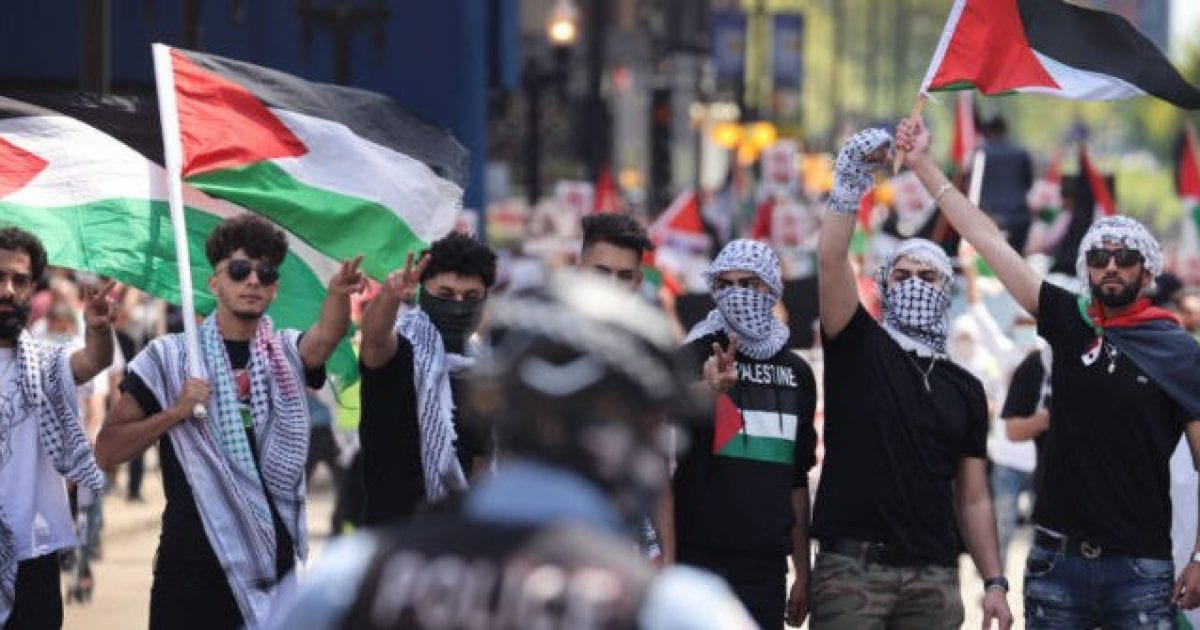 The “Palestinian” movement has one central purpose: The destruction of the Jewish homeland and the Jewish people. It is a German fabricated ‘liberation’ movement. It provides cover for Far Right – Far Left collaboration in the continuing campaign to eradicate the Jews, to deny them safe refuge anywhere.

It is a pretext, a justification for genocide. Germany cannot directly attack Jews, but Muslims are on their behalf, eagerly.

After World War II, exiled Nazis trained, armed, and financed Arabs terrorist militias to continue their attack Jews. German Neo-Nazis trained with the PLO in Lebanon and collaborated to commit acts of terrorism. They were likewise defended by the CIA.

These riots, these mob attacks are testing the response of nations, of governments, of police, around the world. Will they react when Jews are attacked? In fact, with rare exception, they aren’t — not in any meaningful way. The followers of Muhammad now know they’ve been handed a license to kill. Jews in Israel, Jews anywhere, are not allowed to defend themselves — nor will they be defended. They moment they do, they are vilified, even arrested — accused, even, of genocide.

The inevitability of this horrifying moment was expressed plainly by exiled German Nazis and their Islamic Fascist Collaborators for decades, but ignored and dismissed. Today, the Jewish people are in tremendous danger–some are waking up to the peril. Too many are not. A surprising number suppose their support for the Progressive Left, for the “Palestinian” cause will save them. It won’t. No one respects a tool, no one respects a useful idiot, least of all those using you — your complicity, your collaboration simply validates the contempt, the loathing, they already feel for you. You will not be spared.

To speak the truth on the Left today is to expose oneself to almost certain shunning, political exile, and professional suicide, particularly when it comes to Israel. Few dare to take a closer look, to risk losing one’s place in the progressive community, where Jews are afforded inclusion so long as they renounce the Jewish state, denigrate their history and traditions, disavow the tiny sliver of land by which they have been defined as a people for millennia, and, above all, join in equating the defensive actions of Jews in Israel with those who slaughtered their kind across Europe in the millions—to engage, in fact, in Holocaust denial.

A violent mob of Muslim radicals terrorized a pro-Israel rally held outside of Chicago over the weekend. The jihadists physically attacked the pro-Israel demonstrators and called for the slaughter of Jews.

Muslims draped in the Palestinian war scarfs (keffiyehs), which many believe to be the modern equivalent of the Nazi swastika, chanted genocidal anti-Jewish Islamic chant. Mobs screamed, “From the River to the Sea, Palestine will be Free,” this is code for eradicating the State of Israel and its millions of Jews. Also, Khyber Khyber ya Yahood, Jaish Muhammed sa Yahood.”

As previously reported at RAIR Foundation USA, Khaybar refers to the Muslim massacre of the Jews in the town of Khaybar in northwestern Arabia in 628 CE. After the attack, Muslims, including the Islamic prophet Muhammad, took the surviving women as wives.

As scholar Robert Spencer states, “when modern-day jihadists invoke Khaybar, they are recalling an aggressive, surprise raid by Muhammad which resulted in the final eradication of the once considerable Jewish presence in Arabia. To the jihadists, Khaybar means the destruction of the Jews and the seizure of their property by the Muslims.’

Muslims across the United States are emboldened by the Democrat party’s antisemitic policies and rhetoric. Democrat leaders refuse to protect Jews against recurring assaults and threats across America. It is time to close our borders to Islamic supremacists who despise Jews and other non-muslims and deport those threatening violence. Muslims who view themselves as enemies of the United States, its people, and its fundamental laws should not be allowed to migrate to any non-Muslim nation.

A pro-Israel rally held outside of Chicago over the weekend was crashed by a mob of Arab protesters who attacked the pro-Israel demonstration and called for the slaughter of Jews.

The incident occurred on Sunday in downtown Naperville, a city of roughly 150,000 less than 30 miles west of Chicago.

Dozens of Israel supporters gathered outside of city hall Sunday to express support for the Jewish state, before marching through downtown Naperville, organizers said.

n the week leading up to the event, the Instagram account created for the march received over 1,300 comments containing vile anti-Semitism, hate speech, calls for violence at the event, and death threats toward the organizers said Daniel Raab, one of the people behind the rally.

Raab said that a counter-demonstration, dubbed the “Naperville Protest for Palestine”, was later planned, “with the explicit intention to intimidate the Jewish run rally and march onto city hall to confront the 50 Jews and allies gathered for Israel. Violent intentions were expressed as the goal of the confrontations.”

The pro-Israel gathering was interrupted when multiple trucks filled with men waving Palestinian flags drove by, swearing at the attendees and yelling “Free Palestine”.

Police then rushed the marchers through downtown Naperville after a suspicious package was spotted on the route, with the marchers facing constant harassment from the Arab mob.

Authorities eventually cut short the pro-Israel event, saying they were unable to secure the rally from the pro-Palestinian demonstrators.

“We returned to City Hall with one hour left for our event and the police informed us they were shutting us down due to the risk to our lives that the Naperville Protest for Palestine numbering in the hundreds were on their way and that they could no longer keep us safe. We quickly packed up and began evacuating from City Hall,” said Raab.

The anti-Israel demonstrators called not only for the destruction of Israel, but also the slaughter of Jews.

“We could hear the mob chanting while they marched toward us ‘From the river to the sea Palestine will be free’, ‘Intifada Intifada long live the Intifada’, and ‘Khyber Khyber ya Yahood, Jaish Muhammed sa Yahood,’” said Raab. “They were cursing at us and saying to ‘kill the Jews’.”

“When we evacuated a car with four teenage boys, one Jew and three non-Jews from the Walk for Israel got caught in the mob at a traffic light. They were surrounded by the mob with people jumping on and into their car, spitting and punching.”

The Arab mob also stole an Israeli flag and burned it, while attacking the organizers of the event as they tried to drive away.

“…the Germans were irresistibly drawn to this imperial seat of Muslim empire.” | Germany Watch

Dr. Tawfik Hamid: Palestinians, “want to take it further, to apply the prophecies that Muslims will slaughter and kill every Jew in the world”

Who has title to Jerusalem? “…the Jews in this city are NOT settlers. They’re here as of right. ” | Dr. Jacques P. Gauthier, Canadian Scholar of International Law

Why is the United States financing the conscription of Armies of Arab children by the United Nations?

“The German people sees from his life story…that he has something in common with the fate of the Palestinians and the muslims.” | Otto-Ernst Remer