On May 12, 2021, hundreds of pro-Palestinian Muslims gathered outside a synagogue in Gelsenkirchen, Germany, chanting and shouting threatening anti-Jewish obscenities. A video captured police refusing to intervene despite threats and chants of “Shiese Juden,” equivalent to “sh*t jews, f*cking jews” in English. The night before, Israeli flags were lit in front of synagogues attacked in Münster and Bonn….

A policeman was captured in the controversial film clip talking to a Muslim violating Germany’s coronavirus mask mandate. German Police were caught again applying one set of standards for Muslims violating the state’s “mask” and “social distancing” mandates and another for Germans attempting to defend their basic rights. END_OF_DOCUMENT_TOKEN_TO_BE_REPLACED

A report by RIEAS (Research Institute for European and American Studies) said a “confidential police report reveals 42 Albanian criminal
organizations operate in Greece. It states “3,000 Albanian criminals are active in the transportation and distribution of cannabis and heroin, while 2,500 Albanians are arrested each year in Greece for robberies, thefts and burglaries.” Sources from the Citizen’s Protection Ministry “estimate that 3,000 Albanians who live in Greece (many legally) own AK-47 rifles and unknown quantities of ammunition.”

Serbianna reported in Sept. 2012 that Greek security services are taking a special interest in Albanian extremist groups in Greece, Albania, Kosovo and FYROM, considering them to a threat to social stability. The report stated that incidents involving Albanian smugglers and narcotics showed the ulterior motive of the crimes was to raise capital for Greater Albanian extremist nationalist purposes to annex Greek Epiros to Albania.
END_OF_DOCUMENT_TOKEN_TO_BE_REPLACED

I don’t know why anyone would be surprised by jihadist propaganda in this area. The war in BiH [Bosnia] is empirical evidence of such propaganda. Then BiH [Bosnia] was put on top of jihad or holy war. After her came Kosovo and Metohija – emphasizes Janjic.

As he says, jihadists came to this area the least.

– Even direct operatives like Osama bin Laden came, but also mujahedeen from Palestine whose crimes were proven. Of course, there are many Wahhabis, but Wahhabism and extremism should not be equated. At the top of Al Qaeda’s fighters are fighters from Kosovo and Metohija, and even terrorists of Kosovo origin took part in the famous 9/11. END_OF_DOCUMENT_TOKEN_TO_BE_REPLACED

“There is no lawless. There is law.  There is law. It’s really applied in a very strict way…There’s Islamic Law that little by little assumes its throne…”  — Eric Zemmour END_OF_DOCUMENT_TOKEN_TO_BE_REPLACED 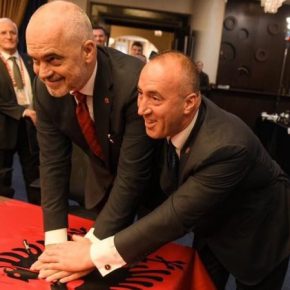 URGENT PETITION – Stop the Persecution of Serbian Christians in Kosovo and Methohija They call it “unification” but the annexation of the Serbian province of Kosovo by Albania was the plan all along. That’s why they needed to drive out the non Albanians from Kosovo– close to 300,000 since the illegal NATO bombing. That’s why they hurried to destroy Orthodox … END_OF_DOCUMENT_TOKEN_TO_BE_REPLACED

“According to prosecutors in a trial of the Jihadi cell in Brescia last December, their aim is simple: To break Europe and impose Sharia law on the ruins. If they do so, the Nato campaign to act as the air force of the Islamist Kosovan Liberation Army will clearly have played an important part in creating the conditions for such a disaster to occur.”

The places on Earth where Islam dominates are block holes of ignorance and cruelty. It stamps out freedom wherever it gets the upper hand, and non-Muslims are always persecuted, because that is what the religion demands. — Pat Condell END_OF_DOCUMENT_TOKEN_TO_BE_REPLACED

Bosnia and Herzegovina — a Muslim-majority country in southeastern Europe more popularly known as “Bosnia” — have put out the welcome mat to the foreign fighters, making it clear that shelter is available to them.

“Right now, they are forming a perfect safe haven in the underbelly of Europe,” said Jovan Kovacic END_OF_DOCUMENT_TOKEN_TO_BE_REPLACED

” In Berlin, a 32-year-old Bosnian, Edin A., murdered his former girlfriend, a 35-year-old German woman named Michelle E., after she ended their abusive relationship. He also abducted and tortured her 12-year-old son, who was forced to watch his mother’s murder.

Neighbors said they had repeatedly alerted the police about Edin A.’s violent behavior, but the police did nothing.” END_OF_DOCUMENT_TOKEN_TO_BE_REPLACED

“The outrage grew louder when it was revealed that Hussein K. had previously been detained on charges of murdering a woman in Greece. According to police, he raped a Greek student and threw her off a cliff on the isle of Corfu in May 2013. He had been sentenced to ten years in prison but was released prematurely only two-and-a-half years into his sentence in October 2015, following a Greek law to ease prison overcrowding.”

German authorities say he will be tried as a juvenile. END_OF_DOCUMENT_TOKEN_TO_BE_REPLACED