“That night they killed about 700 women…”

“Did you see the procession of women?” 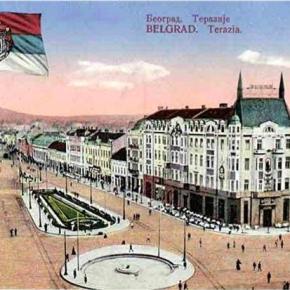 Kingdom of Serbia was the first country after United Kingdom to officially support the creation of Jewish state. Serbian ambassador in Washington sent a letter (pictured above) to Captain Albala, in which he stated:

“I wish you to express to your Jewish brothers the sympathy of our Government and of our people for the just endeavor of resuscitating their beloved country in Palestine which will enable them to take their place in the future Society of Nations according to their numerous capacities and to their unquestioned right. We are sure that this will not only be to their own interest, but at the same time to that of the whole of humanity. You know, dear Captain Albala, that there is no other nation in the world sympathizing with this plan more than Serbia. How should we not participate in your clamors and sorrows lasting ages and generations, especially when our countrymen of your origin and religion have fought for their Serbian fatherland as well as the best of our soldiers? It will be a sad thing for us to see any of our Jewish fellow-citizens leaving us to return to their promised land, but we shall console ourselves in the hope that they will stand as brothers and leave with us a good part of their hearts and that they will be the strongest tie between free Israel and Serbia.”

The Serbian letter marked the first time any government had referred to the yet-to-be-born Jewish state as “Israel,” presaging the name that would be adopted by the nascent republic three decades later. END_OF_DOCUMENT_TOKEN_TO_BE_REPLACED

“In 1933, the year Hitler came to power,  the Third Reich began to publish a racist magazine titled lran-e Bastan (The Ancient Iran). The journal was financed by Siemens-Schukken and pro-Nazi Iranian intellectuals. It referred to Hitler as “one of the greatest men in the world.” It depicted him as the man who ended the alleged 200 year old plot by Jews against the nationalities of the world, especially the Aryans.

The journal also claimed that the swastika was a symbol of Iranians from 2000 years before Christ and they rejoiced over its use as a symbol of German pride and of unity between the Iranian and German peoples.” END_OF_DOCUMENT_TOKEN_TO_BE_REPLACED

Srebrenica was used by the Bosnian Muslims as a base of operations to attack Serb villages in the immediate vicinity.

“In response to the order, a raiding party of Bosniacs under the leadership of Zulfo Tursunovic, attacked the Serb village of Visnjica.”

UNPROFOR had failed to disarm the Bosnian Muslim forces in Srebrenica, and the Dutch military forces in theatre acted in a manner to protect them. END_OF_DOCUMENT_TOKEN_TO_BE_REPLACED

They imitated Nazi Germany. They adopted a very similar ideology.  The Ustashcism is like nativism, like National Socialism.  They were like brothers, like twins for Nazi Germany.  Ante Pavelic, the leader, the Fuehrer of Croatia  went very often to Berlin to learn more, new systems.  So they were very close ideologies.”
– Holocaust Institute Historian-in-Chief Gideon Greif END_OF_DOCUMENT_TOKEN_TO_BE_REPLACED

“…Hitler called his military advisers to Berlin on 27 March. On the same day as the coup he issued Führer Directive 25, which called for Yugoslavia to be treated as a hostile state.[17] Hitler took the coup as a personal insult, and was so angered that he was determined, in his words, “to destroy Yugoslavia militarily and as a state” (Jugoslawien militärisch und als Staatsgebilde zu zerschlagen),[18] and to do so “with pitiless harshness”[19] and “without waiting for possible declarations of loyalty of the new government”.[20] END_OF_DOCUMENT_TOKEN_TO_BE_REPLACED 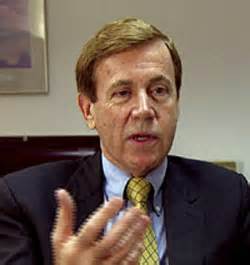 “Croatian and Bosnian past was marked by a real and cruel anti-semitism. Tens of thousands of Jews perished in Croatian camps. So there was every reason for intellectuals and Jewish organizations to be hostile towards the Croats and Bosnians. Our challenge was to reverse this attitude. And we succeeded masterfully…
We outwitted three big Jewish organizations – B’Nai Brith Anti-Defamation League, the Jewish Committee, and the American Jewish Congress.”  –  James Harff, Director of Ruder Finns’s Global Public affairs section END_OF_DOCUMENT_TOKEN_TO_BE_REPLACED 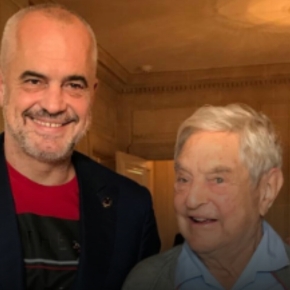 Albania’s socialist prime minister, Edi Rama, is the only foreign leader who came to the U.S. to trash talk Donald J. Trump last year, possibly at the behest of his close friend, George Soros.

Trump’s election would “harm a lot America and it would harm a lot the world,” predicted the 52-year-old professional artist….

As Albanian newspaper editor Erl Murati explained earlier this year, “U.S. official interests coincide with the activity of Soros. It’s difficult to distinguish where the interest of one begins and the other ends. His interests became synonymous with American policy.” END_OF_DOCUMENT_TOKEN_TO_BE_REPLACED