Beyond just fascination, two sources claim, West allegedly took inspiration from Nazi propaganda strategies and power-gaining tactics to achieve his own fame and success. “It’s not a stretch to now compare Kanye’s ‘by any means necessary’ methods and tactics with Adolf Hitler’s,” a former longtime collaborator says. “To know that a Hitler/[Joseph] Goebbels playbook has been a central inspiration to Kanye’s own media playbook helps bring a great deal of clarity to the exact types of moves he’s been making over his career.”  END_OF_DOCUMENT_TOKEN_TO_BE_REPLACED

FIRST, LET’S establish just what a loathsome Jew-hater West is.

On October 15th, he said “The Jewish people have their hand on every single business that controls the world.”

On 18 October 18th he said, “There’s so many black musicians signed to Jewish record labels. It’s like modern-day slavery.”…

Owens, who owns her rise in part to my dear friend Prager and who is employed at the Daily Wire by Shapiro, actually defended this vicious antisemite. After his tweet about going “Death con 3 against Jewish people,” Owens wrote on 11 October, “If you’re an honest person you did not think that this tweet was antisemitic.” Get it? She is the woman defending diabolical antisemitism and is the honest person. We, who are calling him out, are a bunch of liars. 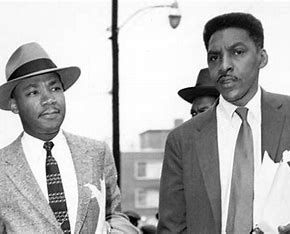 Rustin characterized anti-Semitism as “history’s oldest and most shameful witch hunt,” and he was particularly disturbed by black anti-Semitism, which he publicly acknowledged: “We cannot sweep it under the rug…it is here, it is dangerous, it must be rooted out.” END_OF_DOCUMENT_TOKEN_TO_BE_REPLACED 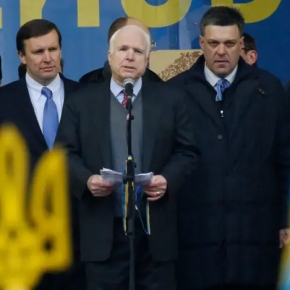 Today, Azov leaders openly acknowledge that were it not for the U.S.-backed coup that unfolded in Kiev’s Maidan Square in 2014, their organization would never have developed into the powerhouse it is. As Semanyaka said this year, according to a summary:

The Ukrainian nationalist movement would have never reached such a level of development unless the war with Russia had begun. For the first time since the Second World War, nationalist formations have managed to create their own military wings, the brightest example being the Azov regime of the National Guard of Ukraine.” END_OF_DOCUMENT_TOKEN_TO_BE_REPLACED

The Obama/Biden Administration is friends of the neo-Nazi group the Azov Brigade.  They recognized them in the US Embassy in Ukraine in 2014….

Yarosh was on the same flight as Poroshenko from South America to Europe.  Yarosh gets his kicks out of assaulting immigrants, gypsies and transvestites in Ukraine.  He has filmed himself during his assaults and takes pride in beating these innocents.  This is who Biden supports in Ukraine.  END_OF_DOCUMENT_TOKEN_TO_BE_REPLACED

“In recent years, the United States has purposely ignored the glorification of Nazi collaborators, the granting of financial benefits to those who fought alongside the Nazis, and the systematic promotion of the canard of equivalency between Communist and Nazi crimes by these countries because of various political interests.” END_OF_DOCUMENT_TOKEN_TO_BE_REPLACED

“Our organization is designed to take power. If circumstances warrant, that could happen by nondemocratic methods. Believe me, we are very capable of acting in extreme situations,” he adds. “At the Maidan we had only 300 activists, and look what we did. In fact, if you consider that there was never more than 1 million people participating in the Maidan altogether, out of a population of 42 million, it shows how things really work. The active minority always leads the passive majority. Scenarios change, and we are ready. Our purpose is to save Ukraine.”

The Right Sector, and other militant street groups such as C-14 and the newly created National Corps, already pose a real and present danger to vulnerable groups of the population, such as gay and transgender people, women’s activists, Roma, as well as any dissidents who might, rightly or wrongly, be viewed as “pro-Russian.” END_OF_DOCUMENT_TOKEN_TO_BE_REPLACED

An activist against fascism who sued a Ukrainian municipality for naming a street for a Nazi SS officer has come under a campaign of intimidation, he said.

Mikhail Voroniak, a Red Army veteran, in summer sued the western municipality of Kalush near Lviv for deciding to name a street for Dmytro Paliiv, a commander of the 14th Waffen Grenadier Division of the SS, also known as the 1st Galician.

Voroniak told the Russian news site Primechaniya that he has come under “aggressive pressures and threats of murder” since he sued. A local court last month dismissed his motion against the honor to Paliiv but Voroniak appealed to the Lviv Administrative Court of Appeals, which was scheduled to review the appeal last week. END_OF_DOCUMENT_TOKEN_TO_BE_REPLACED 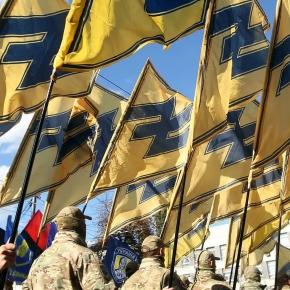 …to stop what US hawks classify as the next Hitler and Nazi Germany, Washington has been backing literal neo-Nazi militias in Ukraine, who are in turn communicating with and training homegrown white supremacists, which Washington in turn is ramping up a menacing repressive bureaucracy at home to counter. It’s what some have called the “self-licking ice cream cone” in action — the US national security establishment creating the very threats that justify itself. END_OF_DOCUMENT_TOKEN_TO_BE_REPLACED