“In Bosnia, in the heart of Europe, a lot has happened. We were side by side with Al Qaeda. Al-Qaeda members learned from us. Mudžahedini from all over the world came to Bosnia. Muslim units of the jihadist–noted Kasemi, the Internet portal “apparatus “, which is close to the Iranian government, was established.” — Sayid Kasemi, retired general of the Iranian Revolutionary Guard END_OF_DOCUMENT_TOKEN_TO_BE_REPLACED 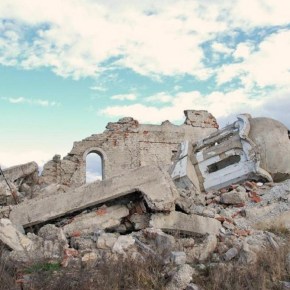 Over 60,000 have signed a petition addressed to President Donald Trump to end the violent persecution of the Serbian Orthodox Christians in the Serbian province of Kosovo. In response, Albanian extremists joined by Albanian ISIS terrorists from Syria have received a “green light” from Washington to attack the remaining Serbian Christian enclaves in the Serbian … END_OF_DOCUMENT_TOKEN_TO_BE_REPLACED 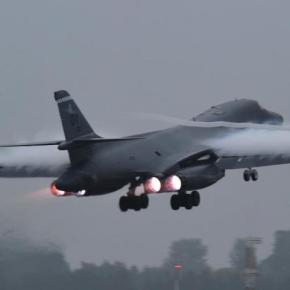 Ostensibly these American bombers are being brought in for NATO exercises.  Many see it as an implied threat of  war against the Serbian people should they act to defend the Serbian Christian enclaves in the province of Kosovo from a planned attack by the US backed Albanian military and ethnic Albanian ISIS fighters who recently … END_OF_DOCUMENT_TOKEN_TO_BE_REPLACED

The action is projected to have two phases.
In the first one, the ROSU SWAT team is due to attack and will receive assistance on the ground from KFOR soldiers, who will take key points and roads in the north.
The second phase involves the inclusion of soldiers from Albania dressed in KSF [Kosovo Security Force] uniforms. More than 100 Albanian specialists are ready to take full control on the ground…. END_OF_DOCUMENT_TOKEN_TO_BE_REPLACED

The 44 year old Thaci was a personal protégé of Clinton Secretary of State Madeleine Albright during the 1990s, when he was a mere 30-year old gangster. The KLA was supported from the outset by the CIA and the German BND. During the 1999 war the KLA was directly supported by NATO. At the time he was picked up by the USA in the mid-1990s, Thaci was founder of the Drenica Group, a criminal syndicate in Kosovo with ties to Albanian, Macedonian and Italian organized mafias. A classified January 2007 report prepared for the EU Commission, labeled “VS-Nur für den Dienstgebrauch” was leaked to the media. It detailed the organized criminal activity of KLA and its successor Democratic Party under Thaci.” END_OF_DOCUMENT_TOKEN_TO_BE_REPLACED 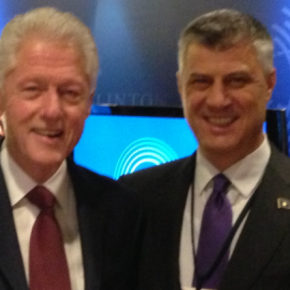 “Twenty years ago the North Atlantic Treaty Organization, led by the United States, waged a relentless 78-day bombing campaign against the Federal Republic of Yugoslavia, consisting of Serbia and Montenegro (March 24-June 10, 1999). This act of naked illegal aggression marked a significant turning point, not only for America and NATO but also for everyone else. The rules-based international order—and its two keystones, the principle of state sovereignty and of the rule of law itself—had been subverted in the name of an allegedly humanitarian ideology… a war was waged on a small independent nation, essentially because it refused foreign troops on its soil—the infamous Annex B from Rambouillet….

[T]he aggressors of 1999 and proponents of Kosovo’s independence in subsequent years have scoffed at the Serbs’ claim that Kosovo, with its many ancient monasteries and the site of the famous battle, represents not just any part of their country but its very heart and soul—“Serbia’s Jerusalem.” Such attitude betrays a cynical contempt for the essence of any true nation’s identity, which necessarily rests on its historical, moral and spiritual roots. Without such foundation, a people ceases to be a people and becomes but a random mob. That is precisely what both America and Western Europe are becoming, now, thanks to the very principles which were used to justify the Kosovo war.”

“While covering the CIA for the Los Angeles Times and later the New York Times, I found that patiently listening to my sources paid off in unexpected ways. During one interview, a source was droning on about a minor bureaucratic battle inside the CIA when he briefly referred to how then-President Bill Clinton had secretly given the green light to Iran to covertly ship arms to Bosnian Muslims during the Balkan wars. The man had already resumed talking about his bureaucratic turf war when I realized what he had just said and interrupted him, demanding that he go back to Iran. That led me to write a series of stories that prompted the House of Representatives to create a special select committee to investigate the covert Iran-Bosnia arms pipeline.”
James Risen – The Biggest Secret
The Intercept, 3 September 2018 END_OF_DOCUMENT_TOKEN_TO_BE_REPLACED

“First they impose the hijab, and then other discriminations will come. They’ll impose restrictions on marriage and divorce and finally will force you to stay at home.” END_OF_DOCUMENT_TOKEN_TO_BE_REPLACED