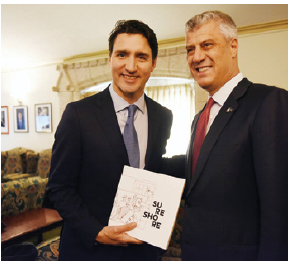 The German intelligence agency BND conducted a recent investigation into Thaçi and his regime and concluded that “the key players (including Thaçi) are involved in interlinkages between politics, business and organized crime structures in Kosovo.”

To put it bluntly, Kosovo is a narco-criminal enterprise.

A separate report conducted for the Council of Europe had a far more sinister overtone. It implicated Thaçi and the former KLA commanders of such heinous crimes as human organ trafficking. Innocent victims — both ethnic Serbian and Albanian — were allegedly executed for the purpose of harvesting their organs on the black market. END_OF_DOCUMENT_TOKEN_TO_BE_REPLACED

“First off, the Arabs are nothing like us. They are descended from colonizers and imperialists who conquered the entire Middle East, much of Africa and Europe and were not gentle with indigenous people. They force converted people, stole language and culture and basically were every bit as bad if not worse than white people in North America.” — Ryan Bellerose END_OF_DOCUMENT_TOKEN_TO_BE_REPLACED