During his recent visit to Serbia, Czech President Milos Zeman boldly suggested his country may withdraw its recognition of the illicit narco-terror ‘state’ of Kosovo. In his address he stated, “A state led by war criminals should not be in a community of democratic countries”

Serbian President Alexandar Vucic was  equally assertive in his response to this expression of support his country is receiving from President Zeman and other nations seeking to reverse the tragic injustice that led to the illegal seizure of the southern Serbian province of Kosovo by Albanian drug lords and war criminals responsible for human trafficking of young women and girls, human organ harvesting, and drug and gun smuggling.

“…I will not beg anyone and apologize to anyone. The time when Serbs humiliated themselves and begged for a nice word is past, I am interested in deeds, and we will respect all others more than they respect us. Serbia’s policy will be led by Serbia, not by anyone from the outside,” Vucic said, commenting on a statement made by a Croatian presidential candidate who said Vucic will not be able to walk around Croatia as he wishes.

If this is true, it would be an important step towards righting a terrible and tragic injustice perpetrated against the Serbian people.  Kosovo must be restored to Serbia, and the terrorists expunged.

Kosovo is run by criminals and has no place among democratic states: Zeman’s message in Belgrade

Czech President Milos Zeman arrived in Belgrade yesterday. Serbian President Aleksandar Vucic officially welcomed Zeman on Wednesday in front the Palace of Serbia in a ceremony that included military honors and the sounding of the the anthems of the two countries.

After the welcome, the two delegations met.

After a face-to-face meeting and a plenary meeting of the two delegations, the presidents addressed reporters and answered their questions.

“Both on the water and on land we can have cooperation with the Czech Republic, and I will not beg anyone and apologize to anyone. The time when Serbs humiliated themselves and begged for a nice word is past, I am interested in deeds, and we will respect all others more than they respect us. Serbia’s policy will be led by Serbia, not by anyone from the outside,” Vucic said, commenting on a statement made by a Croatian presidential candidate who said Vucic will not be able to walk around Croatia as he wishes.

“I believe that we will have significant and great support in the coming period. I knew about this a few days ago and I announced it in Budapest, because you cannot underestimate the Visegrad group. And I knew that was their idea and that they would fight for it,” Vucic said when asked what he thought about proposal by the President of the European Commission to appoint Laszlo Trocsanyi as EU enlargement commissioner.

Speaking about the initiative to withdraw the Czech Republic’s s recognition of Kosovo, the president of Serbia said that he did not expect it but was very grateful for it.

“I am certain those words are reaching more and more ears in Europe and that people understand that things are not as black and white as it used to be thought,” said Vucic.

Asked about saying, on the eve of his visit, that he did not rule out the possibility of the Czech Republic withdrawing its recognition of Kosovo’s someday, and if it could be expected for some country to withdraw recognition of the self-proclaimed Kosovo, Zeman said that it was not up to him alone.

“I said I was not a dictator, unfortunately. What I can do is that now when we have counseling on constitutional representatives, I will ask if it would be possible to do so, because I’m glad that Minister Metnar said it was a mistake to recognize Kosovo, so he will probably be on my side. But we’ll see who will be on other side, we’ll see in a month,” said Zeman.

“We are doing everything we can to safeguard peace, but not everything that happened during the First and Second World War is simple,” said Vucic.

“We are very grateful to President Zeman for his position on the issue of Kosovo and Metohija. I also informed him that only compromises can lead to a solution,” Vucic said, adding that the wounds of the Serb people from NATO bombing have not yet healed. 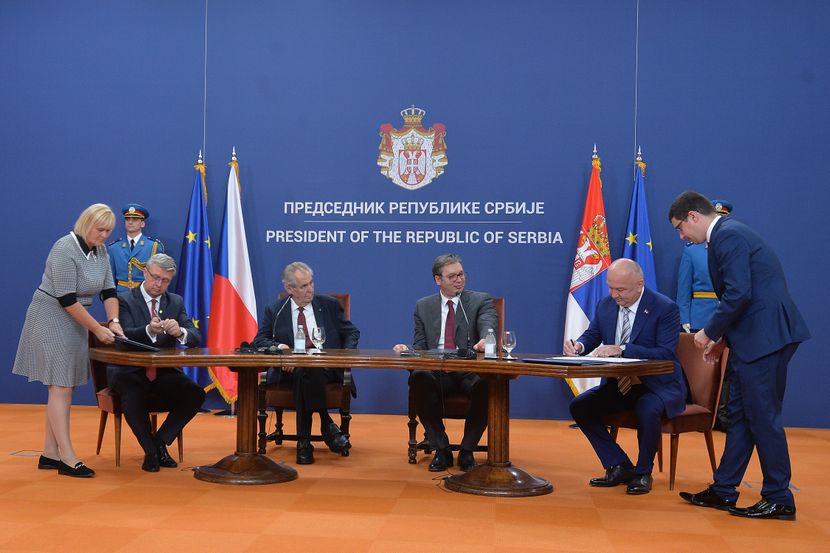 “Every politician should first defend the interests of his country, not be a puppet of foreign authorities. I sincerely appreciate the friendship between the Serbian and Czech people, which is why, although I don’t talk about it often, I received Emir Kusturica who studied in the Czech Republic, and based on the recommendations of important Czech figures, I will award him a medal for his merits on October 28,” said Zeman added that it will be a symbolic award for all Serbs who studied in the Czech Republic.

“A state led by war criminals should not be in a community of democratic countries,” Zeman said, referring to the Hague-based tribunal’s stance on the so-called Kosovo.

President Zeman said that during the meeting, Vucic told him our two countries are twins, which he said he would agree with.

“We have a lot in common and once again I would like to thank Serbia for standing on our side when we were occupied, we have something to repay and that is why I’m here,” Zeman said, adding that no one can force businessmen to come if they don’t want to.

He said that he was quite surprised at how deep the cooperation between Serbia and the Czech Republic is.

He also revealed the details of the meeting with Zeman.

“Our talks were comprehensive, and we spoke about specific issues. We have tripled our trade,” said Vucic, adding that he is grateful to the Czech Republic which has become one of the largest investors in our country.

He said that the Czech Republic has become one of the largest investors – the fourth in Serbia, and especially after the latest investments by the Czech PPF group in Telenor, and Karlovarska buying Knjaz Milos.

Vucic said there are numerous other investments and projects especially in the area of ​​traffic and city lighting.

“Our cooperation can bring even better numbers,” Vucic emphasized and stressed that we can learn from the Czech Republic. 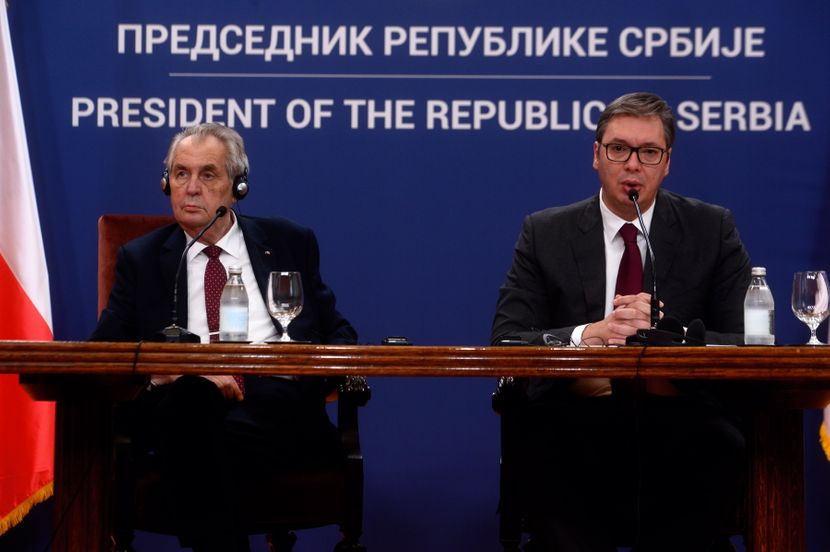 He announced that he will be a guest of Zeman and the Visegrad Group in Prague on October 3.

The Czech Republic has one of the lowest unemployment rates of 2.2 percent while Serbia’s is 10.3 percent, said the president of Serbia, recalling that our country has lowered unemployment a lot in previous years.

“I believe we can do a lot more, our cooperation in the fields of innovation, science, artificial intelligence and robotics is significant. I believe that in the defense industry, with Zbrojevka and Tratra, we will find a common interest to cooperate,” said Vucic, and recalled that a Serbian-Czech business forum will be organized today.

The president of Serbia thanked his Czech counterpart for his visit and invited him to feel at home.

ON THE CZECH NATIONAL MINORITY IN SERBIA

Regarding the Czech national minority in Serbia, Vucic said that the Czechs live in Bela Crkva and many other places, and are wonderful people who love Serbia.

“We have to do everything we can for these people. I want to thank them, both the Serbs and the Czechs, who endlessly love Serbia, fight for the country, improve friendship and brotherhood and closeness between two very friendly and close peoples,” said Vucic.

“The Czech Republic is one of the countries with the lowest unemployment, and cooperation in the fields of innovation, science, artificial intelligence and robotics is particularly important to us. I am especially grateful to President Zeman for the business forum we are organizing,” said Vucic.

He said he believed that we would be able to preserve our country’s national interests, and be able to make progress at the same time. Serbia is not ashamed of its cooperation with China and Russia, and that’s a way for a country at the crossroads to succeed in giving its citizens a better life.

“President Zeman doesn’t hide that he genuinely loves our country and our people, and such people are rare. I am very grateful to him for that,” said Vucic.

UN, NATO, EU leaders admit Serbs, Roma and other minorities were targeted by Albanians in “ready-made plan” to ethnically cleanse them from Kosovo | HRW Report

Albanian ‘historic’ Claims to Kosovo DEBUNKED by discovery of 15th Century Turkish Census Document – More Irrefutable EVIDENCE Serbs are the indigenous people of Kosovo, and, like other Christians, are being targeted for genocide

Czech President Milos Zeman: Kosovo is run by criminals and has no place among democratic nations

Kosovo in the 1980s: Murders, Rapes, and Expulsions

“Their goal was erase every trace of the Serbian presence in Kosovo” | MAURO DEL VECCHIO, FORMER GENERAL OF ITALIAN ARMY IN KOSOVO FOR NATO