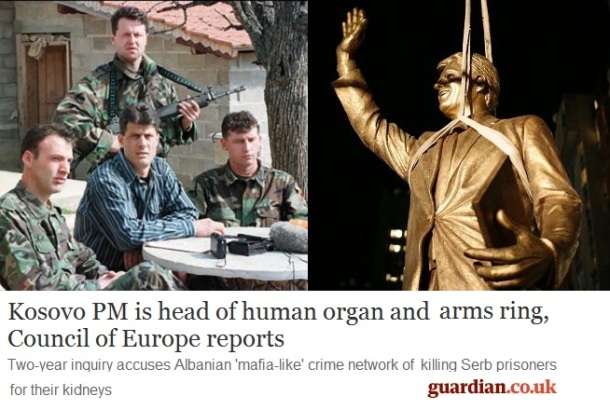 Some members of the Kosovo Liberation Army, which has financed its war effort through the sale of heroin, were trained in terrorist camps run by international fugitive Osama bin Laden — who is wanted in the 1998 bombing of two U.S. embassies in Africa that killed 224 persons, including 12 Americans.

The KLA members, embraced by the Clinton administration in NATO’s 41-day bombing campaign to bring Yugoslav President Slobodan Milosevic to the bargaining table, were trained in secret camps in Afghanistan, Bosnia-Herzegovina and elsewhere, according to newly obtained intelligence reports.

The reports also show that the KLA has enlisted Islamic terrorists — members of the Mujahideen –as soldiers in its ongoing conflict against Serbia, and that many already have been smuggled into Kosovo to join the fight.

Known to its countrymen as the Ushtria Clirimatare e Kosoves, the KLA has as many as 30,000 members, a number reportedly on the rise as a result of NATO’s continuing bombing campaign. The group’s leadership, including Agim Ceku, a former Croatian army brigadier general, has rapidly become a political and military force in the Balkans.

The intelligence reports document what is described as a “link” between bin Laden, the fugitive Saudi millionaire, and the KLA –including a common staging area in Tropoje, Albania, a center for Islamic terrorists. The reports said bin Laden’s organization, known as al-Qaeda, has both trained and financially supported the KLA.

Many border crossings into Kosovo by “foreign fighters” also have been documented and include veterans of the militant group Islamic Jihad from Bosnia, Chechnya and Afghanistan.
Many of the crossings originated in neighboring Albania and, according to the reports, included parties of up to 50 men.

Bin Laden and his military commander, Mohammed Atef, were named in a federal indictment handed up in November in New York for the simultaneous explosions Aug. 7 at the U.S. embassies in Nairobi, Kenya, and Dar es Salaam, Tanzania.

The indictment accused the two men of directing the attacks, which injured more than 5,000 people.

The indictment said bin Laden, working through al-Qaeda, forged alliances with government officials in Iran, the National Islamic Front in the Sudan and an Iranian terrorist organization known as Hezbollah. He was indicted earlier this year by a federal grand jury in New York for his suspected terrorist activities.

The al-Qaeda is believed to have targeted U.S. embassies and American soldiers stationed in Saudi Arabia and Somalia.

The organization also is accused of housing and training terrorists, and of raising money to support their causes.

The State Department, along with other federal agencies, offered a $5 million reward last year for information leading to the arrest and conviction of the two men. Mr. Clinton ordered a retaliatory attack on training bases controlled by bin Laden in Afghanistan and a chemical factory near Khartoum, Sudan, after the bombings.

Last year, while State Department officials labeled the KLA a terrorist organization, saying it bankrolled its operations with proceeds from the heroin trade and from loans from known terrorists like bin Laden, the department listed the group as an “insurgency” organization in its official reports. The officials charged that the KLA used terrorist tactics to assault Serbian and ethnic Albanian civilians in a campaign to achieve independence.

The KLA’s involvement in drug smuggling as a means of raising funds for weapons is long-standing. Intelligence documents show it has aligned itself with an extensive organized crime network in Albania that smuggles heroin to buyers throughout Western Europe and the United States.

Drug agents in five countries believe the cartel is one of the most powerful heroin smuggling organizations in the world.

The documents show heroin and some cocaine is moved over land and sea from Turkey through Bulgaria, Greece and Yugoslavia to Western Europe and elsewhere. The circuit has become known as the “Balkan Route.”

The U.S. Drug Enforcement Administration said in a recent report that drug smuggling organizations composed of Kosovo’s ethnic Albanians were considered “second only to Turkish gangs as the predominant heroin smugglers along the Balkan Route.”

Greek Interpol representatives have called Kosovo’s ethnic Albanians “the primary sources of supply for cocaine and heroin in that country.”

France’s Geopolitical Observatory of Drugs said the KLA as a key player in the rapidly expanding drugs-for-arms business and helped transport $2 billion in drugs a year into Western Europe.

German drug agents said $1.5 billion in drug profits is laundered annually by Kosovo smugglers, through as many as 200 private banks or currency-exchange offices.

Jane’s Intelligence Review estimated in March that drug sales could have netted the KLA profits in the “high tens of millions of dollars.” It said the KLA had rearmed itself for a spring offensive with the aid of drug money, along with donations from Albanians in Western Europe and the United
States.