“There was no secret that the shipments were taking place. The secret was the U.S. involvement, the secret conduct that was different from the open policy.”

As it turns out, Bill Clinton’s “secret conduct” as Commander and Chief amounted to considerably more than giving a “green light” to the delivery of a couple hundred banned Iranian military transports of arms and terrorist operatives.

A 1994 article in the Defense & Foreign Affairs’ Strategic Policy journal entitled US Commits Forces, Weapons to Bosnia reports that thirty of the new Iranians arrivals were dispatched to Bosnia as “instructors” whose activities included transforming “the top floor of the most important hotel in Zenica” into a school for teaching “specialist terrorist (or special operations) units.”

According to U.S. intelligence, which the article notes had “full knowledge of the operation” some of the 400 Iranian Revolutionary Guard contingent deployed in May of 1994 were “detached for future terrorist operations in Western Europe.”

Left, “Abu Abdel Aziz, leader of mujahideen terrorist/trainers in Bosnia. The photo appeared in Newsweek, 5 October 1992, in an article entitled, ”Help from the Holy Warriors.” The London Times wrote that “Aziz claimed to have spent six years fighting in Afghanistan, and had also seen service as a ‘holy warrior’ in the Philippines, Kashmir and Africa.” (9 May 1993). And nine years later, the Gulf News had him leading terrorists who kidnapped European and Asian tourists in Philippines. (5 July 2002 )

The Defense & Foreign Affairs’ article also states that from September to October of 1994 alone “there had been a stream of “Afghan” mujahedin –the name now given to the radical Islamist fighters who earlier operated in Afghanistan–“ arriving in Bosnia using faked documents.

According to the article, upon arrival the Mujahedin fighters were escorted by U.N. peacekeepers “accompanied by US Special Forces equipped with high-tech communications equipment” for the purpose of establishing “a command, control, communications and intelligence network to coordinate and support Bosnian Muslim offensives–with mujahedin and Bosnian Croat Forces.” “Offensives”, the article explains, that were launched ” from within the UN established safehavens…“

In an obscene perversion of the United Nations ‘humanitarian’ mandate, the international arbiters of the conflict—by deploying known Islamic terrorists and Bosnian Islamic militants inside United Nation “safehavens”, transformed U.N. peacekeepers as well as ordinary Bosnian civilians and war refugees into human shields for perpetrators of some of the most grisly atrocities of the war in flagrant disregard of the Geneva Convention.

The practice of harboring Islamic belligerents went on, unabated, for years—with the knowledge of the White House, the United Nations, and the complicity of the international media, engaging as ever in the practice of strategic omission in reports to the public.

Professor Schindler writes that in the case of Srebrenica, Muslim forces “used the U.N.-protected “safe-area” as a staging base for brutal attacks against Serb villages in the Drina Valley since the war’s beginning.”

According to Schindler “noncombatant Serbs including women, children and the elderly” were targeted and “in many cases butchered, tortured, mutilated, burned alive, or decapitated” in murderous raids launched from inside the U.N. “safe haven”.

It was these unspeakable, ongoing atrocities and the regular “black flights” of weapons and ammunition that continued to be delivered to Islamic Bosnian militants inside the officially neutral U.N. “safehaven” that finally led to the Serbian attack on Srebrenica in an “amalgam of strategic calculation and a desire for revenge…” writes Professor Schindler, “borne of three years of mounting frustration and anger” 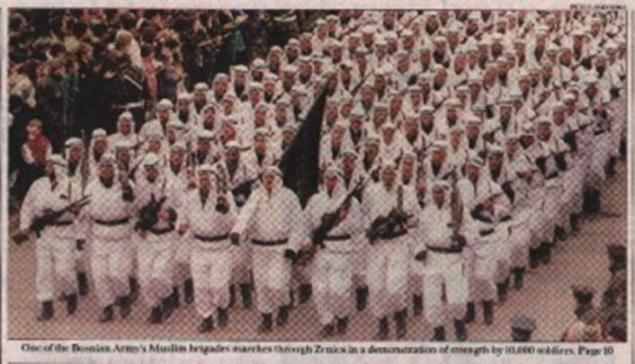 When the Serbs did at last retaliate, they met unexpectedly light resistance in Srebrenica. The fix was in—as it had been since as early as April of 1993, when, efforts to evacuate Srebrenica by United Nations officials in the face of mounting tensions and violence were summarily blocked without explanation by the Bosnian Islamic leadership in Sarajevo according to reports carried in both the New York Times and Reuters; the same month, as it happens, Clinton, according to Izetbegovic, gave his pledge to intervene militarily if, that is, a sufficient Muslim body count could be produced inside that very U.N. ‘safe haven’.

The Islamic leadership in Sarajevo, in fact, having long anticipated the attack, prepared for it accordingly writes Professor Schindler; they withdrew from Srebrenica those Muslim fighters most capable of repelling the coming Serbian offensive.

Other Islamic units in the surrounding area were under strict orders from Sarajevo to ignore all calls for support from the enclave. As the battle ensued, desperate pleas coming across radio communications for assistance from the Islamic forces holed up in the UN “safe haven” were ignored and Srebrenica fell.

In contrast to the atrocities committed against the Serbian peasants by the Islamic militants, the Serbian forces were exclusively interested in the capture of men of fighting age. They were after the perpetrators of monstrous atrocities in the surrounding Serbian villages that the international community had effectively sanctioned with their silence; they wanted the ones responsible for the incomprehensible murder of Serbian infants whose tiny bodies had been found roasted alive inside kitchen ovens ( in recent years, Assyrian infants have met the same horrifying fate in Iraq; in one instance, a Assyrian baby was found roasted, not in an oven, but on a plate of rice).

With the U.N facilitating the slaughter of innocent civilians by harboring the perpetrators inside the “safehaven” and the international community not just turning a blind eye to the on going war crimes, but arming the perpetrators, the Serbs resolved to take matters into their own hands.

The Serbian forces evacuated the Muslim women and children in Srebrenica to safety. The fate of Izebegovic’s forces, however, was another story. Most would not live to see another day.

The U.S. sanctioned onslaught of Bosnia by legions of Islamic terrorists from around the world, financed in part by vast sums of Saudi money funneled through a myriad of Islamic charity front groups, including the Turkish terrorist organization IHH, would help ignite a raging, savage civil war.

It was a war the vast majority of Yugoslavs on all sides never thought possible—and never wanted—leaving Yugoslavia a broken ruin: traumatized, fragmented, and plundered, rife with corruption, and governed by foreign masters, rendering many among the nominally Muslim community primed and readied for well financed, aggressive proselytizing efforts from Saudi Arabia, Qatar, and Iran.  With Yugoslavia destroyed, these countries quickly launched into a frenzied building spree of Mosques and madrassas, enveloping the once proudly secular city of Sarajevo, famous for producing many of Yugoslavia’s most innovative artists, musicians, thinkers, and filmmakers, with ancient Arab calls to prayer imported from a parched, harsh, faraway desert, echoing loudly throughout the European city five times a day, each and every day, beginning at dawn, and ending at dusk, seemingly emanating from every direction such that, now, none but the dead and the deaf can escape it, commanding the indigenous Slavic peoples of Southern Europe–day-in and day-out–that they must abandon their old, wanton ways, discard their traditions, habits, their pivo, and slivovitz, their ruckus celebrations of non Muslim, secular holidays, and fall to their knees, and bow — prostrate themselves in the direction of the Arabian peninsula, towards Mecca, towards their new ideological masters, whose authority seems to come less from the one above, than from those who control the White House.