We are nothing more than cattle to these people: to be contained and controlled… or otherwise liquidated. 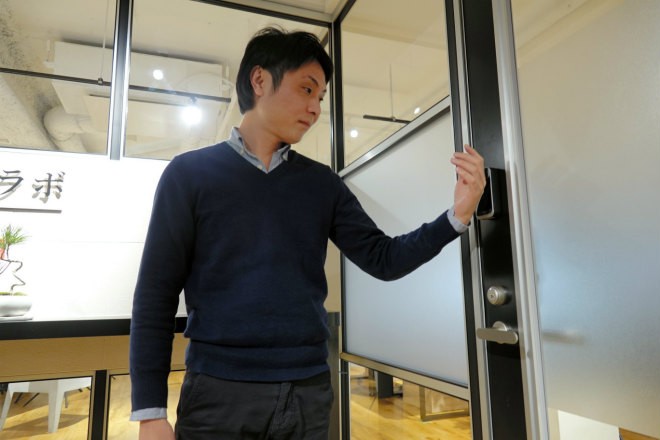 Takashi Hamamichi, head of Osaka-based IT company Otafuku lab, uses the back of his microchipped hand to unlock a door. (Seiji Tanaka)

With microchip implants, humankind has taken a step toward what future-minded experts predict will be a world filled with cyborgs, but Japan lags behind other countries in this regard.

The microchips inserted under the skin are currently limited to such tasks as opening doors and paying for small items, like drinks.

However, Yuichiro Okamoto, a professor of philosophy at Tamagawa University who is well-versed on the ideological background of science and technology, says the implants are just the beginning of “transhumanism,” the theory that science can allow humans to evolve beyond their current physical and mental limitations.

“Humans are moving in a direction toward mutating into cyborgs to acquire capabilities beyond their normal limits,” Okamoto said. “With images of a new way of human life, many people in high-tech industries and youths in Europe and the United States have implanted microchips under their skin.”

The professor noted that “some people might decide to do it as a lifestyle choice.”

In Japan, the trend may be slower, but there is apparently growing interest in the implants.

Takashi Hamamichi, president of Otafuku lab Inc., held his hand near the entrance door of his IT company in Osaka’s Nishi Ward and it automatically opened.

“It’s incredibly handy not carrying around a key,” said Hamamichi, 39.

He had a microchip, 1 centimeter long and about 2 millimeters in diameter, inserted in the back of his hand between the thumb and index finger last year.

The U.S.-made capsule-encased chip, which he bought online, unlocks the door through wireless communication with a device installed beside the door.

Three employees, including Hamamichi, of the company had microchips implanted under their skin. The 12 other employees still use cards to enter the office.

Hamamichi’s embedded chip can also call up the URL of the company’s website on his smartphone.

Last year, the Japan Transhumanist Association, a general incorporated group that aims to promote transhumanism in Japan, used Twitter to solicit volunteers for free chip implants. More than 20,000 people applied, and 20 are currently being prepared for the procedure.

About 5,000 people have already applied in the Tokyo-based association’s latest recruitment drive.

“Many people might not want to have a microchip implanted in their bodies, but I think it’s quite handy,” said Takumi Asano, head of the association.

Asano had microchips implanted in both hands in Sweden.

“I am planning to set up a company to develop an electronic payment system through the microchips,” Asano said.

The association, which has been involved in the development of prosthetic legs through 3-D printers, has teamed up with a clinic in Osaka Prefecture to conduct a clinical study on the safety of such microchips, which are implanted via a dedicated injector.

Giving injections is considered a medical practice, according to the Ministry of Health, Labor and Welfare, meaning the procedure should, in principle, only be carried out by qualified doctors or nurses.

However, people are allowed to give self-injections for insulin and other purposes, so self-insertions of the microchips should be no problem, the ministry said.

Yet different standards for the technology have limited the use of embedded microchips in Japan.

Microchips produced overseas use the Near Field Communication (NFC) standard, which is different from FeliCa, a contactless IC card technology developed by Sony Corp. that is prevalent across Japan.

That’s why the majority of foreign-made microchips cannot be used to pass through train station gates or for electronic payments in Japan.

Hamamichi expects the situation to change drastically in five years.

“I think (embedded microchips) can be used for a great variety of purposes, and it will be common to use them for electronic payments,” he said.

But Okamoto said a philosophical feature in Japan could hinder future advances in the technology.

“Microchips will likely eventually be inserted into human brains to expand their capabilities,” he said. “However, such a move may not be accepted in Japan because Confucian values state that you must not harm the body given by your parents.”

Sweden is considered the world’s most microchipped nation.

Biohax International, a Swedish company that develops the chips, said it has embedded microchips into the hands of more than 4,000 people. The company also holds events for microchip implants.

At a facility in Stockholm that supports start-ups in December, staff member Hannes Sjoblad, 42, held his smartphone over his hand, and the embedded microchip emitted a white glow on his skin.

He said the microchip can lock and unlock doors as well as buy drinks in the office.

More than 100 workers at the facility have microchips under their skin, he said.

Sjoblad received his first microchip implant four years ago before he and two friends set up a start-up to develop microchips.

They plan to sell new microchips equipped with a thermometer and an acceleration meter that measures the amount of activity and other physical conditions.

Sjoblad himself recently replaced his embedded chip with a prototype of the newly developed microchip.

“I want to upgrade. Human is a good start, but you can improve,” he said.