Leftist Canadian Prime Minister Justin Trudeau has followed in his father Pierre’s footsteps both in assuming the high office and using it to further the interests of the Chinese Communist Party, Peter Schweizer writes in his bestseller Red-Handed: How American Elites Get Rich Helping China Win. 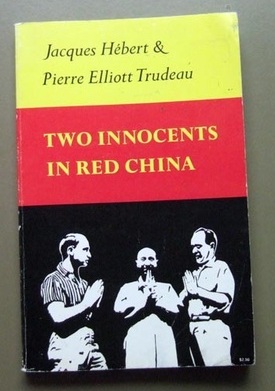 The book, which documents the cozy financial and political relations between the Chinese government and some of the most powerful people in the West, revealed decades of both ideological and financial ties between Beijing and the Trudeaus, beginning with the elder Trudeau visiting China in 1960 and meeting Mao Zedong, among other communist leaders.

Rather than being appalled by the Great Leap Forward, which was ongoing at the time, Trudeau and travel pal Jacques Hébert left the country enamored by communism enough to write a propaganda book titled Two Innocents in Red China.

The Great Leap Forward killed as many as 45 million people and has been described by the Washington Post as “the biggest mass murder in the history of the world.” Yet it remained conspicuously absent in the narrative of Two Innocents. The book describes Mao as a “superb strategist” and proclaims, “it is these red-scarfed kids who in twenty years will be the New Men of a country which at that time will have a billion inhabitants.”

In an interesting coincidence, the elder Trudeau’s ideological fealty to communism, Red-Handed details, was also significantly profitable. Trudeau had benefitted from the support of businessman Paul Desmarais, the head of the company called the Power Corporation that specialized in building business ties to China.

“Trudeau and Desmarais guided Canada’s relationship with Beijing, with Trudeau as prime minister pushing closer relations with the regime while Desmarais cashed in on significant deals with Beijing’s elite,” Schweizer writes. “When Trudeau retired from politics, he went to work at Power Corporation, further nurturing those deals and becoming wealthy in the process.” 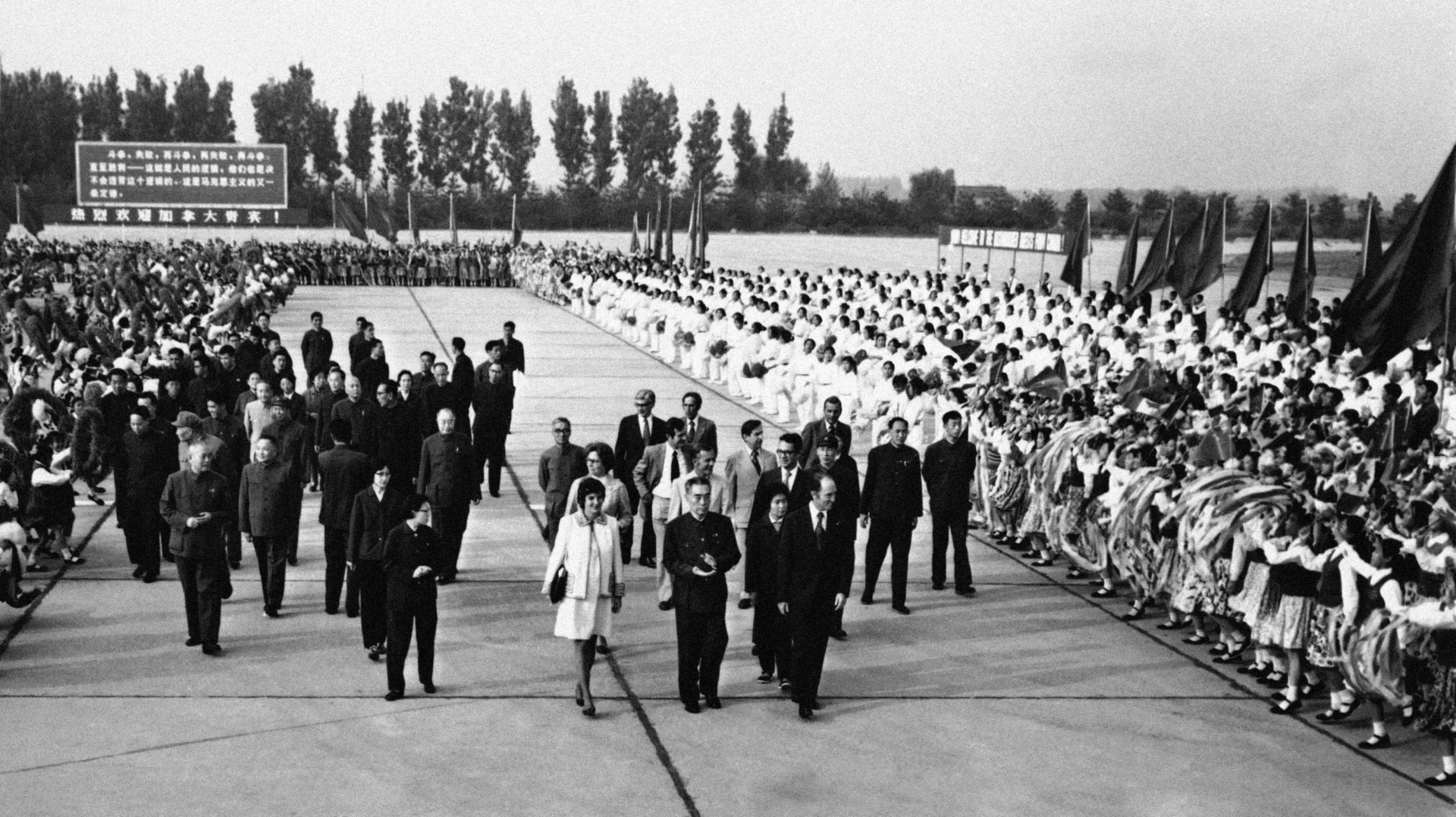 The elder Trudeau worked consulting Canadian companies on how to get rich in China, bringing business to the Communist Party in the process. These business ties were only possible because Trudeau spearheaded the establishment of diplomatic ties to Beijing, at Taiwan’s expense, in 1970.

The younger Trudeau has similarly pursued policies in Canadian politics that enrich the Chinese government.

“In 2012,” Schweizer reports, “he [Justin Trudeau] outlined his support for a controversial energy deal involving the Chinese National Offshore Oil Corporation, which was seeking to acquire the Canadian energy company Nexen. There were concerns about the significant implications to national security and possible damage to ‘Canadian interests and values.’”

Trudeau justified his support for the deal in part because, according to Schweizer, “obviously, my family has historical ties with China.”

Trudeau also faced a barrage of criticism for depending on China for pivotal infectious disease supplies at the height of the first wave of the Chinese coronavirus pandemic. Trudeau’s government chose Chinese companies over Canadian ones to purchase masks, gloves, and other personal protective equipment. Outraging much of the population, Canada had to scramble to replenish its supplies of this equipment – buying it from China – because Trudeau gave away much of it in free “foreign aid” to China. 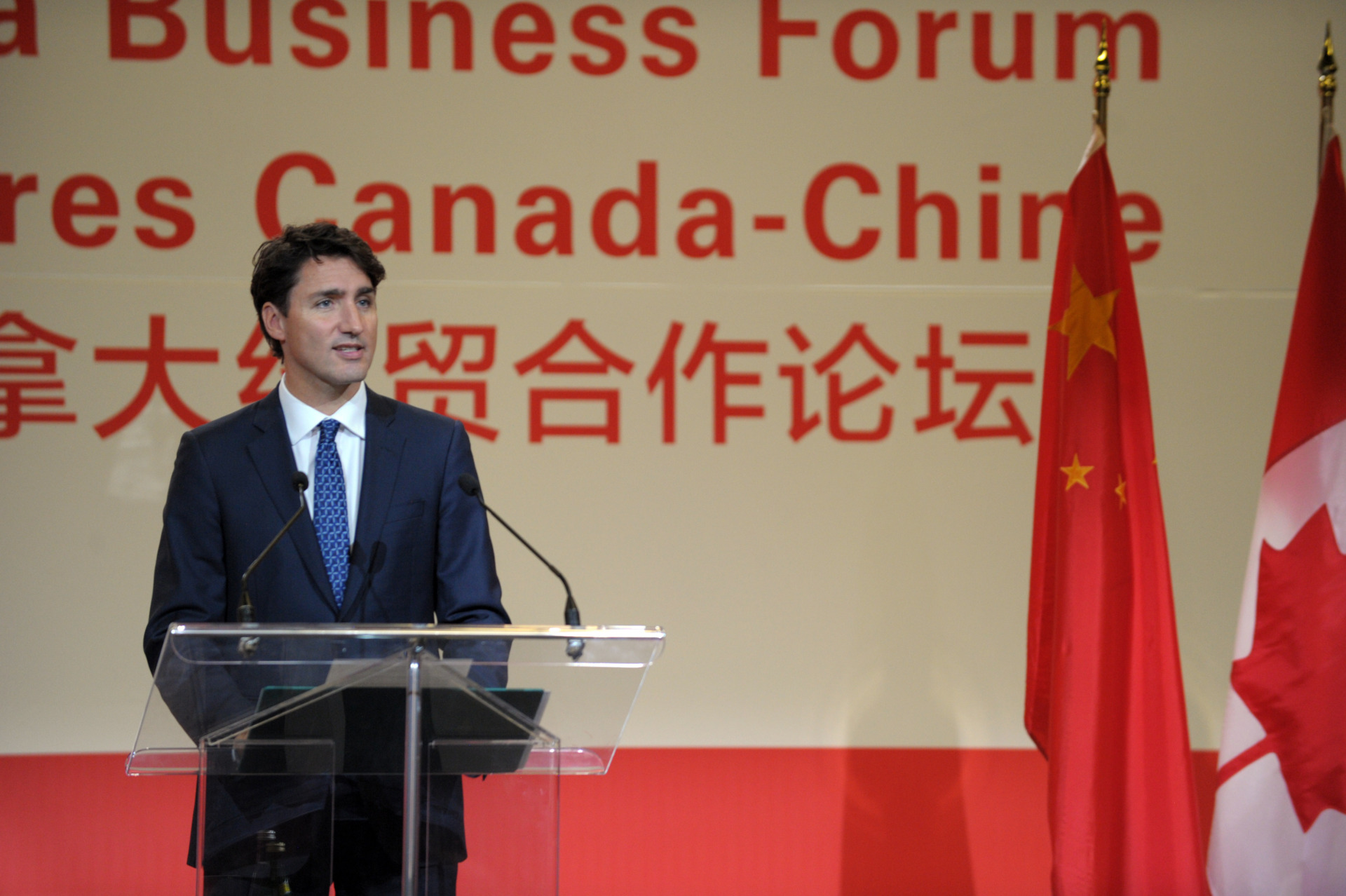 Canadian Prime Minister Justin Trudeau speaks at a conference of the Canada-China Business Council in Montreal on September 23, 2016, during the visit of Chinese premier Li Keqiang. (CLEMENT SABOURIN/AFP via Getty Images)

Trudeau’s ties to China have, on occasion, stretched the limits of Canadian law. In 2016, for example, the Globe and Mail revealed that Trudeau had attended a fundraiser in which he had a private conversation with Chinese businessman Zhang Bin, who then promptly donated one million Canadian dollars to the Pierre Trudeau Foundation. Zhang was, in addition to a businessman, a Chinese regime advisor, making him essentially a lobbyist for a foreign power.

Outside of the strictly political, Justin Trudeau also appeared to receive financial and ideological support from Beijing. As Schweizer details, a Chinese state-owned publisher released a Chinese version of the younger Trudeau’s memoirs, The Legend Continues, in 2016.

“Curiously, some of Trudeau’s national security aides were not even aware that the rights to his memoir had been sold to Beijing, not finding out until 2021, after being contacted by the media,” Schweizer notes. “Trudeau’s aides would later explain that all profits from the book were going to the Red Cross. But the Globe and Mail newspaper could not confirm that claim with either the publisher or the Red Cross.”

Trudeau’s brother and foreign policy adviser Alexandre entered the family business of publishing books in China in 2016, the year after Justin became prime minister. Barbarian Lost: Travels in the New China was largely sold as an update to Two Innocents in Red China. At the time of its release, Schweizer documents, Alexandre used the book to compare the West unfavorably to the rule of the repressive Communist Party, asserting, “I now look at our own freedoms with a little more circumspection and consider some of the irresponsible nature of some of the freedoms we enjoy.”

The Secret Speech of Chinese Communist Party General Chi Haotian (2003) ”Only countries like the UNITED STATES, CANADA and AUSTRALIA have the vast land to serve OUR NEED FOR MASS COLONIZATION.”