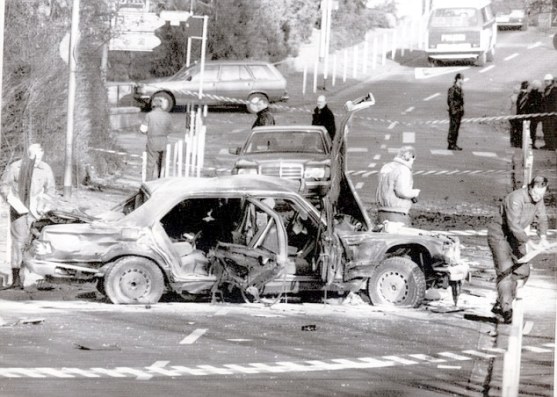 The 1982 documentary “No Place to Hide” offers a fascinating and disturbing retrospective on the history of terrorism.  More importantly, it provides insights and lessons with respect to the violence currently taking place in the US and Europe, and the strategy behind it.

Not surprising, terrorism, in this documentary, is largely attributed to the Soviet Union, the People’s Republic of China, and Cuba as well as other regions of the world  receiving aid and training from Communist countries.   Even so, the documentary points to the little reported role of German Nazis when it reveals that German Neo-Nazis were in fact training with “Palestinian” Arab terrorists in camps in Libya (41:54 / 43:43).   The documentary suggests that this was largely a matter of convenience and ultimately useful to the aims of the Soviets, but as reported in earlier Adara Press posts, Nazis had a central, though largely obscured role in the genesis of international terrorism and various ‘liberation movements’ including that of the “Palestinians.” This is well illustrated by the influential, postwar activities of  Francois Genoud, a committed Nazi:

“Francois Genoud, [was] a member of the Swiss Nazi Party during World War II, who assisted Allen Dulles from 1943-45 in negotiations to redeploy Nazi intelligence assets into safe havens for later use…

Genoud also set up contacts between the old Nazi networks and the Palestinians. In April 1969, in Barcelona, at the “Europaiische Neue Ordnung,” a special delegation of Al Fatah spoke on the issue of the “Palestinian Revolution.”

Genoud arranged for the training of AI-Fatah troops by former Nazis such as Karl van de Put of Belgium, formerly of the Afrika Corps, and Johann N. Schuller.

In September 1969, Genoud was involved as lawyer for two Palestinian terrorists who were members of the Popular Front for the Liberation of Palestine (PFLP). At this point, he was integrated into the “Arab Union of Lawyers,” led by his old Moroccan friend Youssei. Another important link to Palestinian terrorism was Francois Duprat, the French fascist leader assassinated in 1979, who ran the Franco-Palestinian Association and helped set up the Breton liberation movement.

In the 1970s, Genoud expanded his banking operations and financing of the Nazi International. In 1971, his arms smuggling operations into Lebanon expanded as well.” see: “Post-war terrorism has German/Nazi fingerprints all over it.” | جماعة الاخوان المسلمين

“No Place to Hide” also fails to mention of another Nazi, Fritz Grobba.  Grobba was appointed to the position of Director of Arab Affairs in Moscow by the Soviet Union after World War II.

…Fritz Grobba had a hand in directing Soviet policy after the war. According to Martin A. Lee in his book The Beast Reawakens, “Hitler’s top cloak-and-dagger operative in the Middle East…” put himself at the service of the Russian Communists. In 1945 Fritz Grobba “turned his entire spynet over to the Soviet Union”.

In return, the Soviets awarded Grobba a position in Soviet Foreign Ministry in Moscow where the influential Nazi was named Director of Arab Affairs, a position from which he could help shape post war policy in the Middle East. (pg, 132) Though the Soviet Union supported the creation of Israel in 1948, the tenor of the propaganda produced in the years that followed, was viciously anti-Semitic and virtually indistinguishable,  but for the Russian lettering, from that of the Nazis.  see: Michel Chossudovsky and Imam Rauf, co-supporters of Iran and Hamas. Providing cover and enlisting support for US foreign policy (Part 12)

And then there is the unlikely role of the Ford Foundation in generously financing a faculty position for Robert F. Williams at the University of Michigan ( 26:13) given the nature of William’s publications and radio broadcasts while in exile in Cuba agitating listeners in one such broadcast, as seen in the documentary to:

“Prepare the razor, the switch-blade, the bullet, the gas bomb, and the match. Put the torch to the racist strongholds of the city.”  – Robert F. Williams

Today, Ford is generously financing Black Lives Matter, as are many other major corporations such as Cisco and Pepsi. Ironically, Ford enjoys significant portion of its revenues from selling vehicles to law enforcement, even as it is financing a campaign that advocates  for the police to be abolished.

Putting aside the strident Cold War rhetoric, and the minimization of the very active, (well documented) collaboration between the Left and far Right, there are other revelations in this video that merit sober reflection, particularly those that present the words and deeds of the various individuals and terrorist organizations profiled.  Some are profoundly disturbing, but potentially helpful in evaluating what is taking place today.

ENEMY OF THE STATE? The Ford Foundation GIVES MILLIONS to the ‘Defund the Police’ … while Ford Motors MAKES MILLIONS selling POLICE cars to US Law Enforcement

The CIA Protected Adolf Eichmann, Architect Of The Holocaust (and rescued and hired Nazis by the tens of t