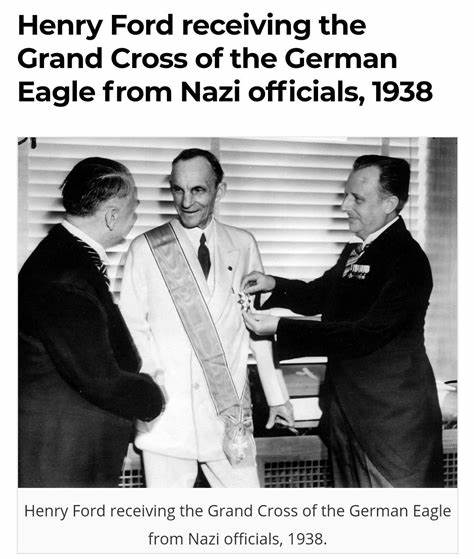 “I doubt the Americanism of that great industrialist, Henry Ford, for accepting that citation from Hitler. I think he is foolish to permit the world’s greatest gangster to give him a citation. I question the Americanism and the Christianity of Mr. Ford.”

Ford has a long history of supporting fascism as it did during World War II when it secretly produced trucks for Nazi Germany.

Today Ford is a key player in the destabilization of the United States having been directly involved in the genesis of Black Lives Matter and the Defund the Police campaign. see: ENEMY OF THE STATE? The Ford Foundation GIVES MILLIONS to the ‘Defund the Police’ … while Ford Motors MAKES MILLIONS selling POLICE cars to US Law Enforcement

How far is Ford willing to go to aid those who would dismantle and destroy the United States? To begin to answer this question, it may be useful to consider Ford’s past conduct, fascist sympathies, and disturbing alliances.

On July 30, 1938, the German consul in Cleveland pinned the Grand Cross of the German Eagle on Ford’s chest in honor of his 75th birthday and his services to the automotive industry, though his specific contributions to the German truck industry went unmentioned. As will be seen, this was a major honor and the same medal that would be controversially awarded to Charles Lindbergh later that year. Many Americans were understandably outraged. The leaders of Jewish War Veterans of the United States called the award “an endorsement of the cruel, barbarous inhuman action and policies of the Nazi regime.” Comedian Eddie Cantor, one of the most outspoken anti-Nazi activists in the country, denounced Ford’s acceptance of the award before a Jewish women’s group: “I doubt the Americanism of that great industrialist, Henry Ford, for accepting that citation from Hitler. I think he is foolish to permit the world’s greatest gangster to give him a citation. I question the Americanism and the Christianity of Mr. Ford.”

Anti-Semitic slurs became common in Ford’s conversations, and in the early 1920s he owned a newspaper called the Dearborn Independent that he changed into a viciously anti-Semitic mouthpiece. He began personally distributing huge numbers of the infamous anti-Semitic tract The Protocols of the Learned Elders of Zion. A few years later he was eventually forced to apologize to the country’s Jewish community after losing a libel suit, but it seems that his own views were unchanged. By the mid 1930s Ford was blaming “financiers and money lenders” for both the New Deal and the prospect of another world war. One of his many admirers was Hitler himself, and according to one account the Führer once indicated his desire to help “Heinrich Ford” become “the leader of the growing Fascist movement in America.”

By 1938, Ford Headquarters in Dearborn, Michigan, was making arrangements to secretly supply truck parts to its Cologne plant to meet the German government’s increasing demand for military vehicles. These vehicles had to be officially built in Germany, so Ford simply provided pre-built components that could be quickly combined to produce working vehicles. In June, the German military requested more than 3,100 trucks from Ford immediately. The vehicles were quickly assembled in the dead of night at the Cologne factory after being shipped in pieces from the U.S. One of America’s leading industrialists had done a huge favor for the Third Reich, and Hitler did not forget.

Ford seems to have disregarded the criticism and continued his work with Germany. In 1938, the Cologne Ford plant was responsible for producing a full 48% of German 2-3 ton trucks. One estimate at the end of the war suggested that 15-20% of all vehicles used by the German army were built by Ford. Profits in the Cologne plant soared. Unbelievably, this continued even after the war started, though communication between Dearborn and Cologne was cut off by wartime conditions. When France fell to the Germans in 1940, Ford Motor Company continued to produce vehicles there as well. Edsel Ford—Henry’s son, and the company’s real leader—kept up his contacts with the occupation French government for much of the war. In May 1942, the French plant was bombed by the British and Edsel expressed relief that the pictures shown in American newspapers hadn’t identified it as a Ford-owned property. In 1943, a pair of investigators concluded that Ford’s operations in France were being used “for the benefit of Germany,” and that this had been approved by Henry Ford himself. 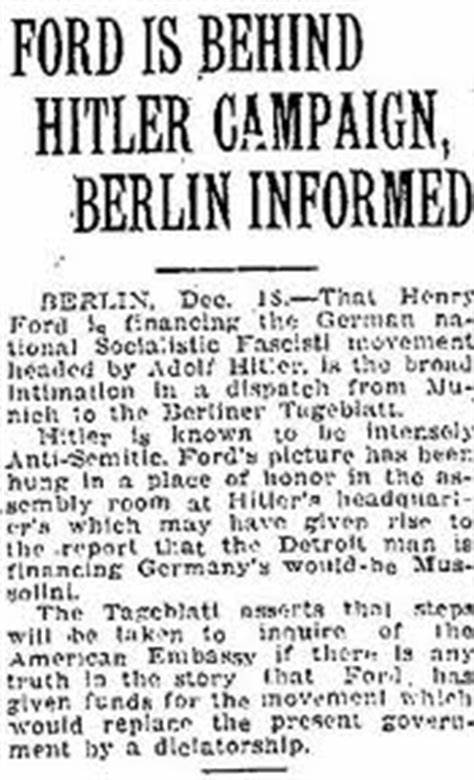 The Ford Cologne plant continued to produce vehicles throughout the war. In 1940, a group of French POW forced laborers arrived at the facility and would be joined by thousands of others by the end of the war. In 1945, liberating soldiers found shivering laborers huddled in barracks at the plant—ironically, these were American soldiers saving forced laborers from what had been an American-owned factory. Ford itself eventually managed to quietly recoup the profits that had piled up at the Cologne plant, though it had to accept a disadvantageous exchange rate to do so.

[…] In 1998, a former forced laborer filed a class action lawsuit against Ford in New Jersey federal court. In response, both Ford and General Motors created a program to pay millions to the victims of forced labor practices in their German factories. Some justice was therefore eventually done, but in many ways it was a drop in the bucket of the pain and suffering Henry Ford’s actions had caused.

There is no doubt that Henry Ford was a great industrialist and a revolutionary businessman. Yet these qualities were matched by the depth of his bigotry and racism. Even worse, these traits extended into his business practices and undoubtedly helped the German military with critical vehicles that let it wage war more effectively. Henry Ford was, ultimately, one of Hitler’s key American friends.