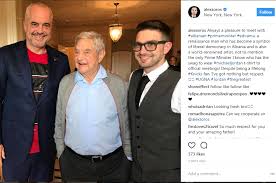 As Albanian newspaper editor Erl Murati explained earlier this year, “U.S. official interests coincide with the activity of Soros. It’s difficult to distinguish where the interest of one begins and the other ends. His interests became synonymous with American policy.”

Albania’s socialist prime minister, Edi Rama, is the only foreign leader who came to the U.S. to trash talk Donald J. Trump last year, possibly at the behest of his close friend, George Soros.

Trump’s election would “harm a lot America and it would harm a lot the world,” predicted the 52-year-old professional artist.

Yet, Rama continues to benefit from a massive USAID program managed by his second wife (of four) and to manipulate a sympathetic U.S. embassy, even as he runs the country into the ground while fomenting chaos in neighboring Macedonia.

U.S. policy needs to make a U-Turn in Albania, assuming it’s even on the radar in Foggy Bottom. […]

USAID spent $60 million in the country’s justice sector alone, 2000 to 2015 — often coordinated with George Soros’ Open Society Foundation under the last administration. As Albanian newspaper editor Erl Murati explained earlier this year, “U.S. official interests coincide with the activity of Soros. It’s difficult to distinguish where the interest of one begins and the other ends. His interests became synonymous with American policy.”

But Western aid has mainly reinforced a dysfunctional State while enriching a nepotistic network.

As explored in the first part of this series, “Macedonia to George Soros and USAID: Go Away,” this external aid is helping the Socialist Party and its fifth column of NGO allies, employing violence as one of its noteworthy tactics, try to gain power against conservatives. […]

At the time, Rama was Tirana’s mayor and the country’s opposition leader, locked in a power struggle with the governing Democratic Party, which had narrowly defeated his side two years before.

Rama instigated the demonstrations — which killed four people and injured more than 150 — to protest government corruption, revealed by a video secretly recorded by the economy minister, showing how he was ordered by Deputy Prime Minister Ilir Meta to commit fraud involving public contracts and bribes. The two men belong to the same party, the Socialist Movement for Integration, DP’s coalition partner at the time. […]

Reviewing various taxpayer-dollar-wasting programs promoted by the U.S. Agency for International Development (USAID), the National Endowment for Democracy (NED), and the U.S. embassy, especially focusing on “democracy building” over the last eight years, shows how fundamentally irrelevant they are to the country’s main problems.

Millions of dollars were spent to install high-tech digital audio recording equipment in 160 courtrooms, as part of a five-year, $9-million program implemented by Chemonics International, between 2010 and 2015. Installing trial scheduling software was another activity to improve court efficiency.

A 2013 assessment by USAID’s inspector general found a serious risk that the equipment could not be sustained since it depended on ongoing investments in server capacity and network upgrades, which Albanian public budgets could hardly afford.

In 2016, USAID/Tirana selected a new contractor, East West Management Institute (EWSI) — a training consultancy financed by George Soros in the 1990s — for a $8.8-million project, “Justice for All,” once again dedicated to improving the country’s justice system through greater transparency, accountability, accessibility bla bla bla.

At about the same time, USAID/Skopje awarded a multi-million contract to EWSI for “civic engagement” in partnership with Soros’s Open Society Foundation in Macedonia.

Guess who oversees the EWSI programs in Albania and Macedonia?

Her current partner is Bledi Çuçi, Rama’s minister of state for local issues until last month, when he was moved to a regional SP campaign position — part of a government reshuffle to satisfy EU anti-corruption demands.

Thus, USAID in the Balkans has empowered the incestuous Soros clan, embedded in the region’s socialist parties, to fly the American flag over its partisan, nepotistic activities.

And the U.S. government has pressured the Democratic Party to defer to the SP on important internal matters.

Last summer, Assistant Secretary of State Victoria Nuland came to Tirana to persuade Lulzim Basha, leader of the DP (who defeated Rama in the 2011 Tirana mayoral race), to give in to the prime minister regarding judicial reform in order to inspire the EU to open membership talks with Albania. Basha’s party boycotted the vote.

Nuland’s long gone, but Embassy Tirana continues to be embroiled in Albania’s partisan politics, siding with the SP, as is well documented by Luke Coffey, director of the Heritage Foundation’s Center for Foreign Policy Studies.

Among the recent fights U.S. Ambassador Donald Lu has picked, he canceled U.S. visas for approximately 70 judges and prosecutors, including the country’s general prosecutor, all DP members, none, reportedly, from the SP.

Six U.S. senators wrote to Secretary of State Rex Tillerson on March 15 asking him to investigate funds dispersed by USAID and embassy in Albania as well as Macedonia that might benefit socialist parties and policies advanced by George Soros’s foundations.

With regard to Albania, the letter says, opposition leaders believe judicial “reforms” promoted by Embassy Tirana “are ultimately aimed to give the prime minister and left-of-center government full control over judiciary power.”