“The serious dangers posed by a Trump presidency are numerous and manifest. There is a wide array of legitimate and effective tactics for combating those threats…

But cheering for the CIA and its shadowy allies to unilaterally subvert the U.S. election and impose its own policy dictates on the elected president is both warped and self-destructive…

For Months, the CIA, with unprecedented clarity, overtly threw its weight behind Hillary Clinton’s candidacy and sought to defeat Donald Trump.”   — Glen Greenwald

In January 1961, Dwight Eisenhower delivered his farewell address after serving two terms as U.S. president; the five-star general chose to warn Americans of this specific threat to democracy: “In the councils of government, we must guard against the acquisition of unwarranted influence, whether sought or unsought, by the military-industrial complex. The potential for the disastrous rise of misplaced power exists and will persist.” That warning was issued prior to the decadelong escalation of the Vietnam War, three more decades of Cold War mania, and the post-9/11 era, all of which radically expanded that unelected faction’s power even further.

This is the faction that is now engaged in open warfare against the duly elected and already widely disliked president-elect, Donald Trump. They are using classic Cold War dirty tactics and the defining ingredients of what has until recently been denounced as “Fake News.”

Their most valuable instrument is the U.S. media, much of which reflexively reveres, serves, believes, and sides with hidden intelligence officials. And Democrats, still reeling from their unexpected and traumatic election loss, as well as a systemic collapse of their party, seemingly divorced further and further from reason with each passing day, are willing — eager — to embrace any claim, cheer any tactic, align with any villain, regardless of how unsupported, tawdry, and damaging those behaviors might be.

The serious dangers posed by a Trump presidency are numerous and manifest. There is a wide array of legitimate and effective tactics for combating those threats: from bipartisan congressional coalitions and constitutional legal challenges to citizen uprisings and sustained and aggressive civil disobedience. All of those strategies have periodically proven themselves effective in times of political crisis or authoritarian overreach.

But cheering for the CIA and its shadowy allies to unilaterally subvert the U.S. election and impose its own policy dictates on the elected president is both warped and self-destructive. Empowering the very entities that have produced the most shameful atrocities and systemic deceit over the last six decades is desperation of the worst kind. Demanding that evidence-free, anonymous assertions be instantly venerated as Truth — despite emanating from the very precincts designed to propagandize and lie — is an assault on journalism, democracy, and basic human rationality. And casually branding domestic adversaries who refuse to go along as traitors and disloyal foreign operatives is morally bankrupt and certain to backfire on those doing it.

Beyond all that, there is no bigger favor that Trump opponents can do for him than attacking him with such lowly, shabby, obvious shams, recruiting large media outlets to lead the way. When it comes time to expose actual Trump corruption and criminality, who is going to believe the people and institutions who have demonstrated they are willing to endorse any assertions no matter how factually baseless, who deploy any journalistic tactic no matter how unreliable and removed from basic means of ensuring accuracy?

All of these toxic ingredients were on full display yesterday as the Deep State unleashed its tawdriest and most aggressive assault yet on Trump: vesting credibility in and then causing the public disclosure of a completely unvetted and unverified document, compiled by a paid, anonymous operative while he was working for both GOP and Democratic opponents of Trump, accusing Trump of a wide range of crimes, corrupt acts, and salacious private conduct. The reaction to all of this illustrates that while the Trump presidency poses grave dangers, so, too, do those who are increasingly unhinged in their flailing, slapdash, and destructive attempts to undermine it.

For months, the CIA, with unprecedented clarity, overtly threw its weight behind Hillary Clinton’s candidacy and sought to defeat Donald Trump. In August, former acting CIA Director Michael Morell announced his endorsement of Clinton in the New York Times and claimed that “Mr. Putin had recruited Mr. Trump as an unwitting agent of the Russian Federation.” The CIA and NSA director under George W. Bush, Gen. Michael Hayden, also endorsed Clinton and went to the Washington Post to warn, in the week before the election, that “Donald Trump really does sound a lot like Vladimir Putin,” adding that Trump is “the useful fool, some naif, manipulated by Moscow, secretly held in contempt, but whose blind support is happily accepted and exploited.”

It is not hard to understand why the CIA preferred Clinton over Trump. Clinton was critical of Obama for restraining the CIA’s proxy war in Syria and was eager to expand that war, while Trump denounced it. Clinton clearly wanted a harder line than Obama took against the CIA’s long-standing foes in Moscow, while Trump wanted improved relations and greater cooperation. In general, Clinton defended and intended to extend the decadeslong international military order on which the CIA and Pentagon’s preeminence depends, while Trump — through a still-uncertain mix of instability and extremist conviction — posed a threat to it.

Whatever one’s views are on those debates, it is the democratic framework — the presidential election, the confirmation process, congressional leaders, judicial proceedings, citizen activism and protest, civil disobedience — that should determine how they are resolved. All of those policy disputes were debated out in the open; the public heard them; and Trump won. Nobody should crave the rule of Deep State overlords.

Yet craving Deep State rule is exactly what prominent Democratic operatives and media figures are doing. Any doubt about that is now dispelled. Just last week, Chuck Schumer issued a warning to Trump, telling Rachel Maddow that Trump was being “really dumb” by challenging the unelected intelligence community because of all the ways they possess to destroy those who dare to stand up to them:

And last night, many Democrats openly embraced and celebrated what was, so plainly, an attempt by the Deep State to sabotage an elected official who had defied it: ironically, its own form of blackmail.

Back in October, a political operative and former employee of the British intelligence agency MI6 was being paid by Democrats to dig up dirt on Trump (before that, he was paid by anti-Trump Republicans). He tried to convince countless media outlets to publish a long memo he had written filled with explosive accusations about Trump’s treason, business corruption, and sexual escapades, with the overarching theme that Trump was in servitude to Moscow because they were blackmailing and bribing him.

Despite how many had it, no media outlets published it. That was because these were anonymous claims unaccompanied by any evidence at all, and even in this more permissive new media environment, nobody was willing to be journalistically associated with it. As the New York Times’ Executive Editor Dean Baquet put it last night, he would not publish these “totally unsubstantiated” allegations because “we, like others, investigated the allegations and haven’t corroborated them, and we felt we’re not in the business of publishing things we can’t stand by.”

The closest this operative got to success was convincing Mother Jones’s David Corn to publish an October 31 article reporting that “a former senior intelligence officer for a Western country” claims that “he provided the [FBI] with memos, based on his recent interactions with Russian sources, contending the Russian government has for years tried to co-opt and assist Trump.”

But because this was just an anonymous claim unaccompanied by any evidence or any specifics (which Corn withheld), it made very little impact. All of that changed yesterday. Why?

What changed was the intelligence community’s resolution to cause this all to become public and to be viewed as credible. In December, John McCain provided a copy of this report to the FBI and demanded they take it seriously.

At some point last week, the chiefs of the intelligence agencies decided to declare that this ex-British intelligence operative was “credible” enough that his allegations warranted briefing both Trump and Obama about them, thus stamping some sort of vague, indirect, and deniable official approval on these accusations. Someone — by all appearances, numerous officials — then went to CNN to tell the network they had done this, causing CNN to go on air and, in the gravest of tones, announce the “Breaking News” that “the nation’s top intelligence officials” briefed Obama and Trump that Russia had compiled information that “compromised President-elect Trump.” 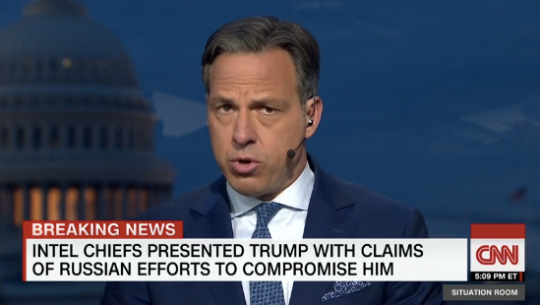 CNN refused to specify what these allegations were on the ground that it could not “verify” them. But with this document in the hands of multiple media outlets, it was only a matter of time — a small amount of time — before someone would step up and publish the whole thing. BuzzFeed quickly obliged, airing all of the unvetted, anonymous claims about Trump.

Its editor-in-chief, Ben Smith, published a memo explaining that decision, saying that — although there was “serious reason to doubt the allegations” — BuzzFeed in general “errs on the side of publication” and “Americans can make up their own minds about the allegations.” Publishing this document predictably produced massive traffic (and thus profit) for the site, with millions of people viewing the article and presumably reading the “dossier.” 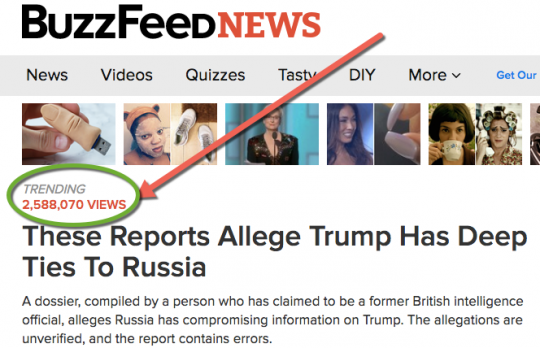 One can certainly object to BuzzFeed’s decision and, as the New York Times noted this morning, many journalists are doing so. It’s almost impossible to imagine a scenario where it’s justifiable for a news outlet to publish a totally anonymous, unverified, unvetted document filled with scurrilous and inflammatory allegations about which its own editor-in-chief says there “is serious reason to doubt the allegations,” on the ground that they want to leave it to the public to decide whether to believe it.

But even if one believes there is no such case where that is justified, yesterday’s circumstances presented the most compelling scenario possible for doing this. Once CNN strongly hinted at these allegations, it left it to the public imagination to conjure up the dirt Russia allegedly had to blackmail and control Trump. By publishing these accusations, BuzzFeed ended that speculation. More importantly, it allowed everyone to see how dubious this document is, one the CIA and CNN had elevated into some sort of grave national security threat.

Almost immediately after it was published, the farcical nature of the “dossier”manifested. Not only was its author anonymous, but he was paid by Democrats (and, before that, by Trump’s GOP adversaries) to dig up dirt on Trump. Worse, he himself cited no evidence of any kind but instead relied on a string of other anonymous people in Russia he claims told him these things. Worse still, the document was filled with amateur errors. […]