This protest outside the offices of New York Attorney General Eric Schneiderman’s office demanding an investigation into the theft of billions of dollars by the Bill and Hillary Clinton from the Haitian people brought together an unlikely group.

Notably absent are members of Black Lives Matter — perhaps because their major donor is George Soros, who happens also to be a major donor to Hillary Clinton’s campaign.

The NYC Haitian Community (& allies) held a  press conference (of sorts) to “denounce Schneiderman`s double standard in deciding to persecute the Trump Foundation for fraud while ignoring the lack of audits and  billions `missing` from the Clinton Foundation.” They demand the Clinton’s return BILLIONS stolen from Haiti.

“Schneiderman is clearly abusing the authority of his office to tilt the scales in favor of Hillary Clinton in the upcoming US presidential elections.”

“Our community has been protesting, for 2 years now, in front of the Clinton Foundation, Hillary`s offices in Manhattan and Brooklyn, as well as Bill Clinton`s Harlem office; to let the world know of the crimes this family has committed in our country. They used `poor` Haiti as a conduit to launder funds into their foundation accounts.” 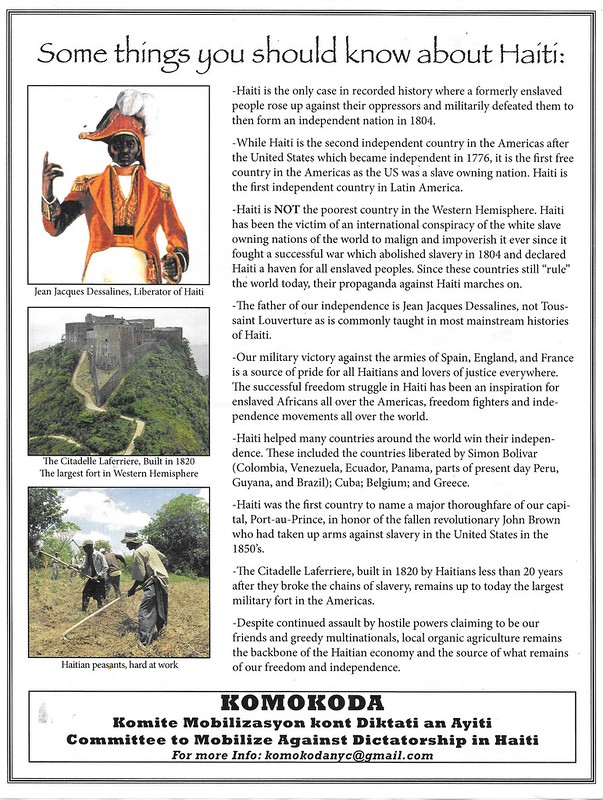 “The Clintons gave lucrative no bid contracts for Haiti earthquake cleanup, reconstruction and housing to cronies who in turn gave them high-priced speeches and `donated` to their foundation.

They imposed Michel `Sweet Micky` Martelly, a degenerate crackhead as President of our country to ensure that the Haitian Government wouldn’t call them out on their crimes.”

“The complicity of mainstream and even some so-called progressive media in this charade is disgusting. We demand that the different branches of US federal and local governments stop this blatant cover up of the crimes of Hillary Clinton and the Clinton family.” 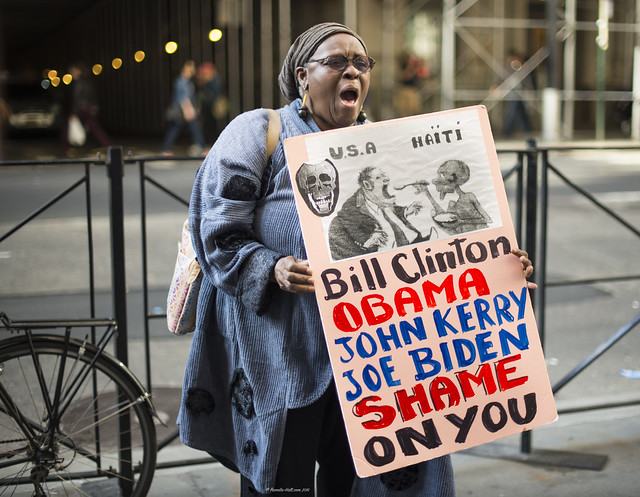 WHO were these protestors – I’m confused because  Lynn Stewart’s husband, Ralph Poynter, was handing out flyers. Workers World? and Democracy Now?

An eclectic bunch this day that seems to agree on exposing Clinton but do they ALL support TRUMP. (probably not) 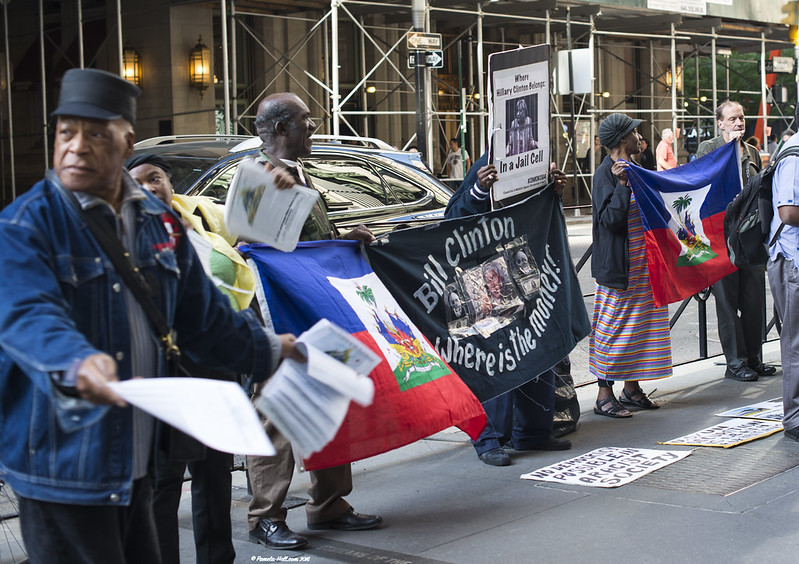 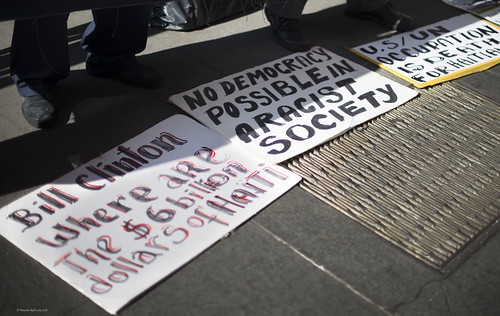 “With Haiti and her wonderful people under assault again, it should grieve all Americans that Bill Clinton and his false-front network pretending to be “charity” refuses to account for billions of dollars in missing aid money. What kind of people divert rescue funds from poor neighbors who share so many common bonds? The people of Haiti deserve a bright future… Thank you for prodding Americans to do the right thing, for exposing Clinton family disaster cronyism and for your fortitude. 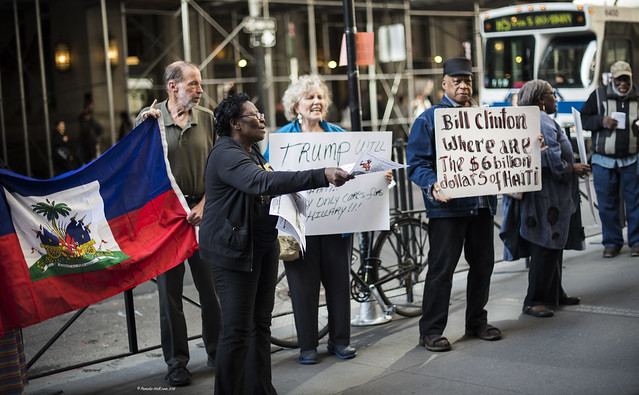 Soon after Hillary Clinton became the Secretary of State, Vikram Chatwal donated a large sum of money to a person in India who manufactured “human rights” reports against India but which were aligned with Hillary Clinton’s anti-India agenda. Chatwal’s name also came up in what was known as the cash for votes scam in India. 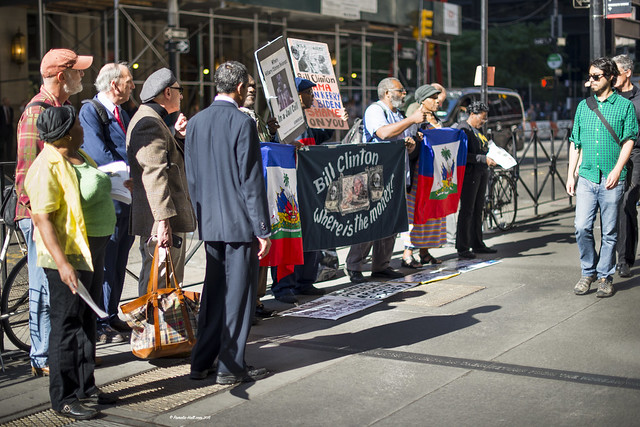 Writer Roger Stone was on hand for awhile (and Dr. James Corsi arrived after I left) 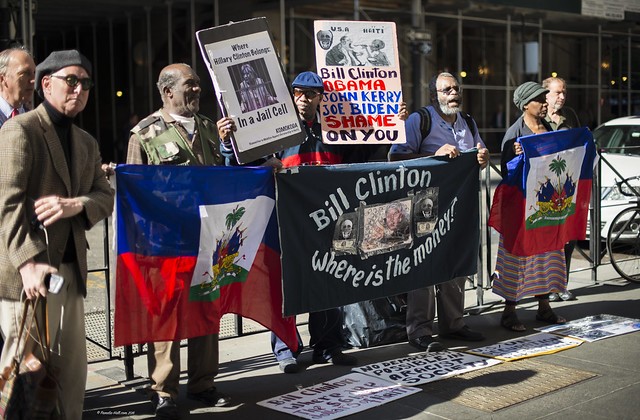 *At the time we are sending this email the Haitian Government has upgraded the death toll from Hurricane Matthew to 283. We have to note that the authorities have yet to reach some severely affected areas of the country. As unbelievable as it sounds Bill Clinton has published a tweet directing people wishing to help Haiti in the aftermath of the hurricane to donate to the Clinton Foundation and their network of crooks in Haiti.  [….] we would like to thank all well meaning people who have expressed their concerns and positive vibrations toward our people with regard to Hurricane Matthew which has ravaged the Southern parts of Haiti. […] We thank everyone who is eager to make a donation but given our experience with international NGO’s such as the Red Cross and the Clinton Foundation stealing moneys donated to help our people, we ask people not to repeat the same mistake they made in the past.

WHERE ARE THE BILLIONS! 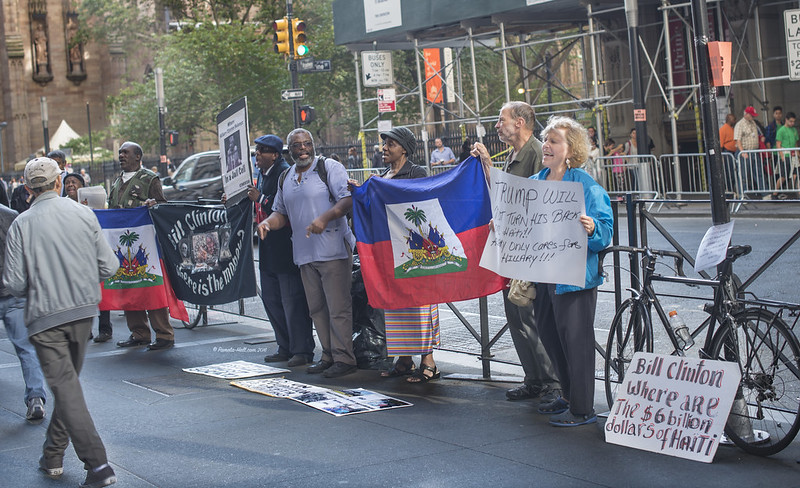 “KOMOKODA  [t]AG Schneiderman […] As a member of Hillary Clinton’s Leadership Council for NY State and as someone who has campaigned and donated the maximum allowed ($2700) to Clinton […] if he was not going to go after the Clinton Foundation, the proper thing would have been to leave the Trump Foundation alone as well

… the Haitian people… have no idea what they have done with all the billions meant to help Haiti that have been in their charge: Secretary of State Hillary’s control of all USAID money, Bill’s UN Special Envoy money, Bill’s Interim Haiti Recovery Commission money, Bill’s Clinton-Bush Fund money, and of course their Clinton Foundation money.

….the Clinton Foundation …. collects billions on behalf of poor non-white people all over the world; keeps billions for themselves and spends a few million on silly projects that will never allow their victims to get on their feet.[…]  This Foundation is no more than a channel for the Clintons to enrich themselves, keep those loyal to them employed and amass a war chest so they can stay in power and out of jail.

We are telling the American people that[….] in this race Donald Trump is the lesser evil facing the US and humanity today.

Just like the people of England did with their Brexit, we hope that on Tuesday Nov. 8th, the American people will slap their establishment in the face and stop Hillary Clinton with a vote Donald Trump. ”

The REAL Hillary exposed remains in reach of the presidency. 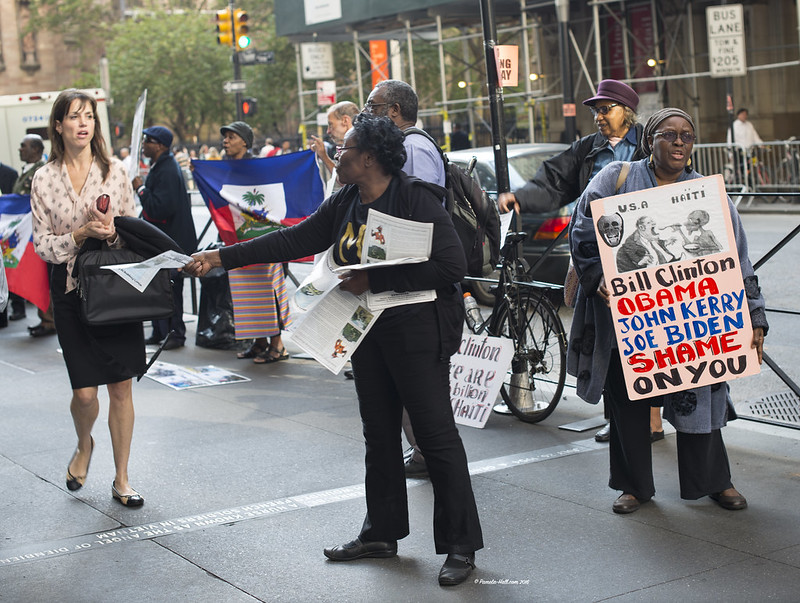 Daniel Greenfield:
Even when the Clinton Foundation tried to perform its good deed for the year, it cut corners on charity to keep up its core mission of getting Hillary into the White House. It shipped AIDS medicines that had been banned in the United States to the Third World. Haitians protested outside Hillary’s office over the millions that had been raised for Haiti, but got funneled to Hillary pals like Warren Buffett instead.

The Clintons are attracted to corruption the way that flies are drawn to offal. The media can spot no flies on Hillary. Its fact checkers excuse every scandal. They even invent a positive spin for a fly landing on her. The ordinary fly visiting Hillary may hold no special meaning. But flies are notoriously attracted to rotting things. And no political figures in this country are as rotten to the core as the Clintons. 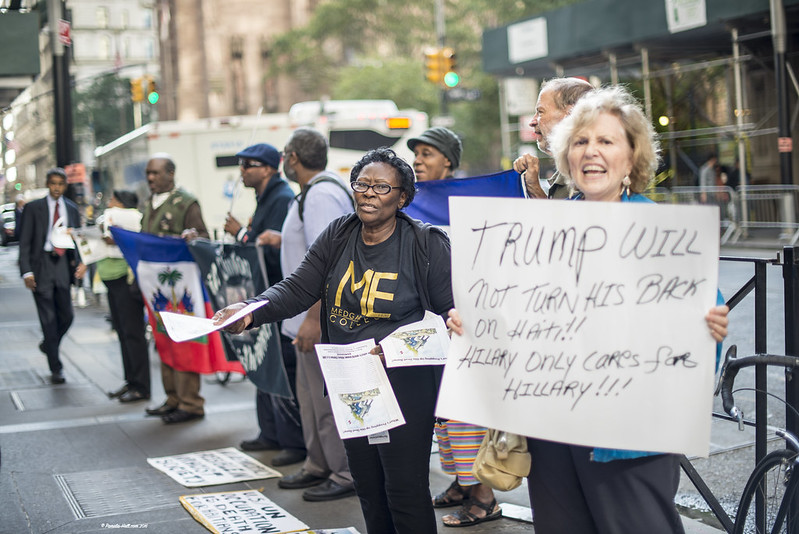 Hillary skates on charge after charge. No matter how many laws they break. Wake Up, America!