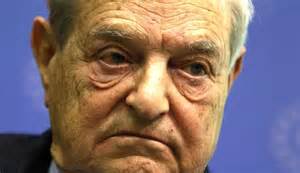 While some old codgers like to wile away their golden years golfing and gardening,  George Soros prefers to spend his days manipulating elections, destabilizing countries, and toppling governments…whatever it takes to destroy the lives of millions.

He’s been at this for some time, and has become quite proficient: A one-man civilization wrecking ball.  Well, not really one-man.  He has (owns?) folks like Hillary Clinton, and an infinite supply of journalists, academics, activists and lots of others on-the-take, doing his bidding, aggressively deluding and confusing the unsuspecting public, while wreaking mayhem, strife and destruction.  What else is an old billionaire to do with his time and his money?

Hillary Clinton has offered extraordinary praise for this generous donor to her campaign and that of the Democrat Party in the United States.  Back in 2004 she shared these heartfelt sentiments about her generous patron:

“We have been given an extraordinary blessing and at this moment in time our country needs us, and we need people like George Soros who is fearless and will to step-up when it counts.”

While serving as Secretary of State for the Obama Administration she took direction from George Soros in her official dealings with Albania; emails show, she dutifully followed his instructions to the letter.  One would be hard pressed to find where her foreign policy positions differed with his at all, or that of Bill Clinton’s while he was president.

Recently, thanks to the efforts of some determined hackers (reportedly Russian) hard evidence of his manipulations were exposed in the release of some 2,000 hacked documents culled from the activities of his Open Society Foundations.

Both the Conservative cable network Fox News in the United States, and the Russian RT reported on some of what the leaked documents contain.  In watching these televised reports back-to-back it becomes glaringly evident that the reporting by each of these popular “News” organizations, though sharply critical and informative, is decidedly skewed– perhaps most notably by what is omitted.  And what is omitted should give all of us pause.

Not surprisingly,  the RT report is concerned with the deliberate targeting of Russia by Soros in a “half-a-million dollar effort to find evidence of Russia’s alleged influence in Europe’s political life.”  Russia is hardly the first to be targeted. As RT shows, Soros has quite the ‘Rap-Sheet’ when it comes to  manipulating the political fortunes of other countries.

RT provides a graphic slide show of victim countries that have succumb to well financed Soros machinations: Serbia in 2000 with the ouster of Serbian President Slobodan Milosevic,  Georgia in 2003, Ukraine in 2004, Kyrgyzstan in 2005.

None of this, however, was included in the Fox report.  It’s easy to see how these details  would undermine Fox anchor Bill O’Reilly’s laughable branding of George Soros as a “far Left fanatic”.  Seems unlikely a true “far Left fanatic” would be targeting a nation at odds with the U.S. run  by a former Soviet KGB agent– and be a billionaire no less.

Like Fox, RT likewise withholds pertinent information found in the hacked Soros documents from its large global television audience. No doubt, some of this omitted (censored?) information is likely to prove a real ‘head-scratcher’ for many of its loyal anti-Israel viewers, especially the ardent anti-Semitic cyber trolls dedicated to disseminating the ludicrous notion that George Soros is an “Evil Zionist” (Okay. Fair enough. The “Evil” part may be an apt characterization).

Turns out, according to information contained in the hacked documents,  George Soros has been financing the activities of groups extremely hostile to the State of Israel to the tune of $10 million dollars.  That’s a rather significant piece of news RT decided not to share. For this telling tidbit of information, it’s necessary to turn to Fox News.

It’s hard to know exactly the reasons for this rather glaring omission by this “trusted” alternative news source, though it seems likely it has something to do with the fact that RT has long been extremely hostile in its reporting of Israel and has consistently forwarded a pro Arab “Palestinian” narrative that curiously aligns rather closely with the George Soros anti-Israel agenda.

Any guesses as to whether any of the many anti-Israel, pro-“Palestinians” activists, and NGOs invited on to RT to condemn Israel also received Soros funding?

Of course, it isn’t just that George Soros has sought to imperil Israel through the generous funding of hostile NGOs. He has also aggressively aided and defended Israel’s enemies abroad:  Most notably the Iranian Islamic junta and the Muslim Brotherhood.

In the United States, Soros joined forces with Ron Paul and Conservative Republican Grover Norquist among others to successfully crush the Iranian opposition in defense of Iran’s murderous Islamic theocrats.  Through his International Crisis Group, Soros was instrumental in the ascension of the Muslim Brotherhood in Egypt–a fascist organization feared and loathed across much of the Middle East.  In both cases, his efforts and activities were in league with Washington.  Hillary Clinton, as Secretary of State, was a key player.