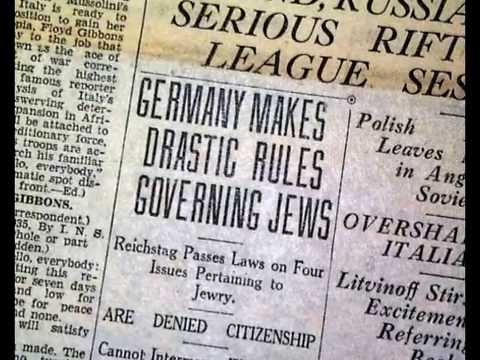 Adara Press wrote on this issue in 2014,

To speak the truth on the Left today is to expose oneself to almost certain shunning, political exile, and professional suicide, particularly when it comes to Israel. Few dare to take a closer look, to risk losing one’s place in the progressive community, where Jews are afforded inclusion so long as they renounce the Jewish state, denigrate their history and traditions, disavow the tiny sliver of land by which they have been defined as a people for millennia, and, above all, join in equating the defensive actions of Jews in Israel with those who slaughtered their kind across Europe in the millions—to engage, in fact, in Holocaust denial.

Dershowitz and his fellow Liberal – Progressive minded Jews — even Israeli leaders — encouraged this by accepting and promoting the fiction — the lie – of a “Palestinian” people and the genocidal project that is the “two-state solution”.

Just as with the Nuremberg laws in Nazi Germany, exclusion is just the beginning; it is the perquisite for violence.

Unless and until the German Nazi origins of this fascist fraud is exposed for what it is, Jews are facing a profoundly perilous future, even in the United States.

Are Jews who refuse to renounce Israel being excluded from “progressive” groups? 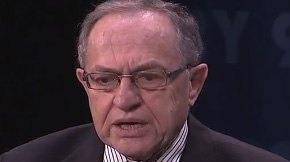 Hard left activists are trying to exclude Jews who do not renounce Israel from “progressive” organizations.

Last year, Rabbi Susan Talve, a longtime activist on race issues in the St. Louis area was told that her advocacy for Israel was incompatible with the objectives of Black Lives Matter: “Solidarity from Ferguson to Palestine has become a central tenet of the movement” she was informed, because “Israeli and U.S. state oppression are deeply interconnected.” Similarly, a student who attended a Black Lives Matter rally at Northwestern University last year was told “you support Israel, so you cannot also support us.”

Recently, that seems to be the response of many of the hard left activists who dominate so-called “progressive” social justice movements.

Over the past several years, progressive Jews, and progressive supporters of Israel have had to come to terms with the reality that those who do not reject Israel and accept Boycott Divestment Sanctions (“BDS”) and its unique brand of bigotry are no longer welcome in some progressive circles. And while both Democratic and Republican parties have embraced the importance of the U.S. alliance with Israel, that dynamic is under threat more so than at any point in my lifetime.

The self-described “progressive wing” of the Democratic Party—represented by radical and often repressive organizations such as MoveOn, CodePink, Occupy Wall Street, and Black Lives Matter—has become openly opposed to the nation state of the Jewish people. Increasingly, these organizations demand that their members and “allies” renounce support for Israel and for Zionism in order to belong. Using the pretext of intersectionality—a pseudo-academic theory which insists that all social justice movements, except those supportive of Jews or Israel, are inexorably linked—anti-Israel activists have successfully made opposition to Israel and support for BDS a litmus test, especially for Jews, to belong to “progressive” movements focused on a wide range of issues.

Earlier this year, supporters of the LGBTQ community in Israel learned this lesson the hard way, when BDS activists together with a local Black Lives Matter chapter broke up a gay pride event, because it featured a presentation by an Israeli group. The protestors claimed that the event organizers had engaged in “pinkwashing” the Israeli occupation by showing solidarity with the Israeli LGBTQ community.

Members of the National Women’s Studies Association (“NWSA”) who also support Israel have been similarly excluded. Last year, that organization voted to endorse BDS, and as one pro-BDS activist explained: “What is significant about this particular resolution is the rationale; the fact that the resolution makes it explicit that BDS is a feminist issues… that one cannot call themselves a feminist… without taking a stand on what is happening in Palestine.” (Apparently, one can call oneself a feminist without taking a stand on Syria, Russia, Saudi Arabia, and other nations that grossly violate human rights).

This type of repressive ideological packaging has left progressive Jews, and liberal supporters of Israel in an increasingly uncomfortable position. On the one hand, they care deeply about causes such as women’s rights, criminal justice reform, income inequality, environmental protection and LGBT rights. On the other, they find themselves excluded from the groups that advance those very causes, because—while they are often critical of specific Israeli policies regarding settlements and the occupation—they refuse to renounce Israel as a national liberation movement of the Jewish People.

For hard left activists, this sort of nuanced position is impossible to accept. Their hostility towards Israel does not stem from any particular Israeli actions or policies. Even if Israel were to withdraw from the West Bank, destroy the security barrier, and recognize Hamas as a legitimate political organization, it would still not be enough. For these radicals, it is not what Israel does; it is about what Israel is: the nation state of the Jewish people—or to use hard-left terminology: an imperialistic, apartheid and genocidal, colonialist enterprise. The recently released Black Lives Matter policy platform offers a perfect example of such extreme rhetoric: it states that U.S. military and economic support for Israel makes American citizens complicit in “the genocide taking place against the Palestinian people.”

The fact that the BLM platform reads like it was lifted from a BDS screed is hardly coincidence: the two groups enjoy a longstanding relationship, and a prominent BDS activist apparently helped draft elements of the BLM declaration. But BLM is far from the only hard left organization that has been infected by BDS vitriol. In fact, BDS has pressured a wide range of progressive organizations into assuming an anti-Israel posture. The American Green Party, for example—which has become a haven for disaffected progressive activists this election cycle—recently came out in support of BDS and called for the US to end its support for “the Israeli apartheid regime”.

This trend has been particularly pronounced on college campuses, where a host of academic groups—most absurdly the Native American Scholars Association and the Americans Studies Association—have passed resolutions in favor of BDS. Many of these organizations have also endorsed the Palestinian Academic and Cultural Boycott (“PACBI”), which encourages participants to engage in McCarthyite blacklisting of Israeli academic institutions, as well as groups and individuals who promote “Brand Israel.” This category apparently includes artists like Matisyahu, and academics like me, as I found out last year when a prominent BDS advocate refused to debate me at the Oxford Student Union.

The PACBI also explicitly denounces “normalization projects“—programs or events aimed at Israeli-Palestinian reconciliation that do not sufficiently emphasize the colonialist nature of the state of Israel. These are exactly the types of initiatives widely supported and promoted by progressives who are critical of settlements, but remain supportive of Israel and of a two state solution. It is no coincidence that BDS has singled them out for special treatment. BDS campaigners want to force any supporters of Israel—no matter their stances on other political issues—outside of the progressive tent.

This effort has proved alarmingly successful thus far, but despite the pressure from the hard left, liberals and progressives who support Israel must continue to carve out a political space for themselves. In doing so, they can follow the example of the Jewish Community Relations Council, which dissociated itself “from the Black Lives Matter platform and those BLM organizations that embrace[d] it” but committed itself “unequivocally to the pursuit of justice for all Americans, and to working together with our friends and neighbors in the African-American community, whose experience of the criminal justice system is, far too often, determined by race.” Such efforts are critical to ensure that it is not supporters of Israel but rather those repressive bigots who falsely claim the mantle of progressivism and who subscribe to the identity politics practiced by BDS that are delegitimated by mainstream progressives and liberals.

How Britain is “subsidising acts of mass murder and terror” against Jews – pays for “militants, killers, Palestinian palaces and jobs that don’t exist”