These videos teach Muslim children to celebrate the conquest and occupation of Spain and Serbia by Muslim armies.

The occupation of Spain is  widely romanticized and defended, as it is in this animated Qatari production.  In the case of Serbia, the history of Muslim tyranny against the indigenous Serbian people is largely omitted from the public discourse, thus precluding the need to whitewash it.  No doubt, it was also deemed unnecessary given the vicious demonization to which Serbs were subjected during the 1990s in part to fabricate and promote the hoax of Muslim victimhood in the former Yugoslavia.

In fact, the suffering and sacrifice of the Serbian people at the hands of the Turks was immense. They were brutally subjugated by the Ottoman Islamic Empire for five centuries during which time they waged an extraordinary, epic resistance against their Muslim overlords. 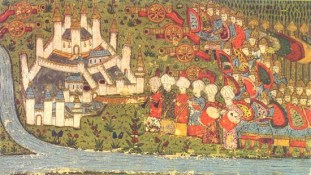 This is what young Arab – Muslim children are taught in this video about the conquest of Belgrade (Beograd):

Are you ready to learn about the history of Islam?  Today I’m going to tell you about the great Muslim conquests which rocked the foundations of all European countries.  I’m talking about the conquest of Belgrade on 4 Ramadhan 927 AH (1521 CE), under the leadership of Suleiman the Magnificent, one of the Ottoman Sultans

The city of Belgrade was the key to central Europe and its famous fortress was on the greatest fortresses of Europe and the most impenetrable of all.

When the Muslim army reached the fortress of Belgrade, they placed their canons around it and started shelling non-stop, in accordance with the plan. The attacks continued for three consecutive weeks, until troops shelled the largest tower, which collapsed along with the morale of the soldiers inside.

Then the Muslims stormed the fortress, sowing destruction.  They fought until Allah granted them victory and they conquered Belgrade, the fortified city that was the pride of Europe.

“Animated videos posted on the Internet teach children about Islamic conquests in Europe. The videos were produced as educational software for “Boys and Girls,” the children’s section of the Qatari government-owned Internet portal Islamweb.net. A large number of the portal’s educational videos were posted on various YouTube accounts. One video discusses the conquest of Al-Andalus, which was “in order to spread the light of Islam.” “This is how Islam entered Al-Andalus, where it built a great civilization,” an animated character says. Another video describes the conquest of Belgrade, “the fortified city that was the pride of Europe.” The videos were posted on the Internet in February 2016.” — Memri