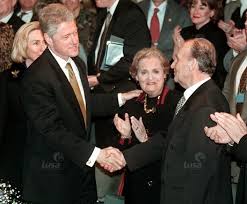 In the 1990s, the Muslim leadership in Bosnia under the US installed, Iranian financed operative Bosnian President Alija Izetbegovic orchestrated numerous mass atrocities against their own people in a campaign to destabilize and dismantle the Partisan nation of Yugoslavia.

As seen in the short video clip below, gruesome, horrific attacks against Bosnian Muslim civilians were staged with television cameras at the ready.  This was well known, and documented by the Western powers as well as the United Nations, yet largely unreported by them or the media.   Instead, a flagrant lie was aggressively propagated  that the Serbs were responsible for the attacks.   Meanwhile, those who sought to expose this falsehood, were labeled ‘apologists’ for Serbian aggression.

The tactic worked and worked well.

What isn’t shown in this video is the very active role of Iran, Turkey, and other Muslim nations in financing, arming and training the Muslim forces in these terrorist attacks with the knowledge and approval of the Clinton White House and other western powers.  Nor does this video clip show the thousands of foreign mujahedeen – jihadi fighters and members of Iran’s Revolutionary Guard Corps who flooded the Balkans to aid the effort to destroy Yugoslavia, an aim shared by the recently reunited Germany that was likewise arming the Fascist Croatian separatists led by Franjo Tuđman .