Ramush Haradinaj, former KLA leader, former Kosovo prime minister and member of one of the most influential Albanian families with strong criminal connections was yesterday found not guilty on all accounts of the indictment for crimes against the Serbs, Romas and Albanians in Kosovo and Metohija during 1999. 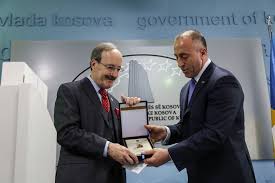 ‘The first wrong decision of the trial chamber was to allow him to defend while on bail since he was one of the most influential people in Kosovo and Metohija. Nine witnesses in his case have been killed, three of them were protected witnesses! I am expecting the Hague prosecution to file complaint and I shall appoint one of my deputies to help them in preparing that complaint’, Serbia war crimes prosecutor Vladimir Vukcevic said.

Some of these nine killed people would have testified in the courtroom about the killings and torture of civilians in Haradinaj’s presence.

Until so far about 40 witnesses to KLA crimes from Kosovo and Metohija have been killed.

“Asked about the reported difficulties between the Tribunal and the United Nations Interim Administration Mission in Kosovo (UNMIK), Ms. Del Ponte said that the court had faced a lot of difficulties with the United Nations Mission, particularly in connection with the former High Representative’s friendship with Ramush Haradinaj, former leader of the Kosovo Liberation Army and former Prime Minister of Kosovo. The Tribunal had found it “stupefying” that security had depended on Haradinaj, a war criminal. The Tribunal had investigated him, issued an indictment and received a confirmation” (December 10th 2007)

60,000+ signed Petition to Stop the Persecution of Serbian Christians in Kosovo and Methohija