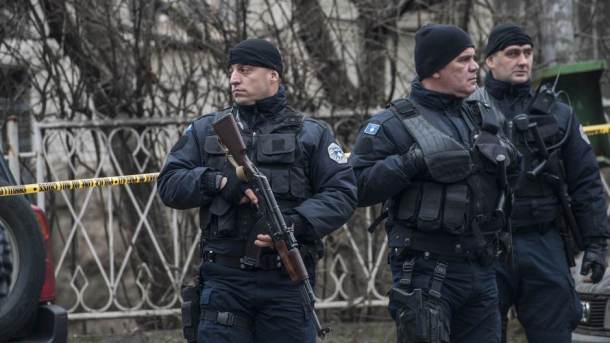 As anticipated, a violent offensive against the remaining Orthodox Christian community in the Serbian Province of Kosovo by Albanian armed militias comprised of terrorists and members of the Albanian drug-cartel  has prompted protest and threats of military action of the part of the Serbian government.
Serbian police were brutally beaten and arrested by the Albanians, including a Russian U.N. official, who required hospitalization for severe head injuries.  Albanian militias confiscated Serbian firearms.
Many Serbs suspect this offensive was intended to disarm and cripple the defenses of the remaining Serbs in preparation for a larger Albanian attack to force them out of Kosovo.  Albanians are reportedly laying mines in the area.
https://www.b92.net/eng/news/politics.php?yyyy=2019&mm=05&dd=28&nav_id=106916

President of the Republic of Serbia Aleksandar Vucic said today that in the operation of a special unit of the National Liberation Army, former ROSU and FIT, 23 persons of Serb and Bosniak ethnicity have been arrested in the north of Kosovo-Metohija, mostly members of the Kosovo police.Speaking in the Serbian parliament after the session of the National Security Council, Vucic said that this was an attempt to completely criminalise the Serbian people, who is more anxious than ever.

He recalled that Belgrade had information that this would happen, and on 17 May informed the local and international public and representatives of the EU that the Albanians were preparing the arrest of dozens of people in the north of Kosovo under the pretext of fighting organised crime and corruption, which will cause great anxiety and fear among the Serbs.

If there is any serious threat to the order and lives of Serbs in Kosovo-Metohija, the Serbian Army will protect the people, the President said, and confirmed that military and police units are fully on the alert
https://www.ft.com/content/ff22b11a-8155-11e9-b592-5fe435b57a3b

Serbia puts army on alert as tensions with Kosovo flare Belgrade and Pristina clash over anti-smuggling operation in Serb-dominated north Kosovo police secure the area near the town of Zubin Potok in Mitrovica district, northern Kosovo, on Tuesday  Serbia put its army on alert on Tuesday after armed police in neighbouring Kosovo raided properties in the Serb-dominated north of the country in an anti-smuggling operation. More than two dozen people, including ethnic Serb and Albanian members of the Kosovo police were arrested as well as two UN officials — including a Russian national — who were accused of using a diplomatic vehicle as a barricade. Serbian president Aleksandar Vucic said he had ordered soldiers near the Kosovo border to be on “combat alert”, in case tensions escalated. Speaking in a parliamentary debate on Monday about Kosovo, which is 90 per cent ethnic Albanian, Mr Vucic said it was “only a matter of time until the Albanians attack the Serbs in Kosovo”. As tensions between the Balkan neighbours flared, Pristina called on Belgrade not to politicise a police operation aimed at customs evasion.

Kosovo’s president Hashim Thaci accused the Russian UN employee of being “camouflaged under a diplomatic veil to hamper the police operation”. Belgrade’s reaction to the raid in the city of Mitrovica, which is divided between Serbs and Albanians, highlights the still fraught relationship between Serbia and its former province. Kosovo declared independence from Serbia in 2008, almost 10 years after the end of a bloody armed conflict. More than 100 countries recognise Kosovo, but crucially Russia, China and Serbia do not. Kosovo did not exercise police control over its restive north until after 2013, when Pristina and Belgrade signed an EU-brokered agreement.

Kosovo’s president warns of danger of return to ethnic conflict According to the terms, hundreds of ethnic Serbs who served in Serbia’s police force would be retrained and hired by the Kosovo police. Belgrade-backed institutions, unrecognised by Pristina, still function in Kosovo’s north. Russia called Tuesday’s police raids and the arrest of its UN diplomat a “provocation”. The diplomat was later released. Several thousand Nato peacekeepers are stationed in Kosovo. Since 2008 the country has hosted EULEX, the largest civilian defence mission ever deployed under the EU’s common defence and security policy, which for years oversaw Kosovo’s police and judicial operations.