This development is especially intriguing in light of the recent meeting Congresswoman Tulsi  Gabbard, a Democrat from Hawaii, had with  President Bashar Al- Assad.  Gabbard traveled to Syria apparently without the knowledge of senior Democrat Leadership.  She was also one the very first politicians to meet with Republican President Donald Trump at Trump Tower following  his election. 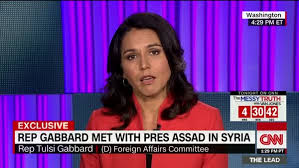 …she was one of just 47 Democrats who sided with Republicans and backed a GOP-sponsored measure that would essentially block Syrian and Iraqi refugees from resettling in the US. Gabbard was also a vocal critic of the Obama administration – which repeatedly called for Assad to step down – for arming Syrian rebel groups.

In November, Gabbard met with then president-elect Donald Trump to discuss foreign policy. Trump has stated he will end assistance to US-backed Syrian rebels. His son, Donald Trump Jr, met privately with pro-Russia diplomats and political figures in October to discuss the Syrian conflict.

During her interview with CNN, Gabbard claimed the US was funding terrorist groups by assisting Syrian rebels and further pushed a talking point propagated by the Assad regime and the Russian government that there are no moderate rebels in Syria.

That argument was also at the center of an op-ed published by Gabbard on Thursday in her hometown newspaper, the Honolulu Star-Advertiser

Gabbard was joined on her trip to Syria by former Ohio congressman Dennis Kucinich, a Progressive Democrat past presidential candidate who works at contributor to the Fox News cable network in the United States. 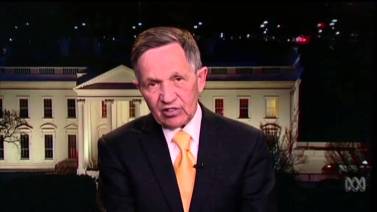 Presidents Trump and Putin agree to set up US, Russian and Turkish safe zones for Syria. The US military will replace Iran and Hizballah on the Israeli and Jordanian borders.

Syria stands on the threshold of dramatic changes that will directly impact on the strategic and military situation along the Syrian borders with Israel and Jordan, debkafile reports exclusively. They derive from a deal struck this week by US President Donald Trump and Russian President Vladimir Putin to establish US, Russian and Turkish security zones in Syria. This scheme will transfer military control of the country to those three powers. Each of them will be responsible for a zone whose borders will be defined and agreed upon by Washington, Moscow and Ankara.

As part of this arrangement, all forces from the Iranian military, the pro-Iranian Shiite militias and Hizballah will be required to leave Syria.

The US military is to have two security zones – one covering the entire area east of the Euphrates River up to the Iraqi border including Kurdish areas (see attached map). This arrangement will partly resurrect the accord reached in late 2015 by US President Barack Obama and Putin, for the division of Syria into areas of influence. All territory east of the Euphrates was allocated to the US, with Russia taking responsibility for all areas west of the river until the Mediterranean coast. .

Under the new deal, the Turkish area is to stretch about 650 kilometers along the entire Syria-Turkey border and extend between 35 and 50 kilometers into Syrian territory up to Al-Bab, the town where the Turkish military is engaged in its third straight month of fighting for its capture from ISIS.

debkafile’s military and intelligence sources report that the overriding change on the ground will be the establishment of a second US security zone adjacent to Syria’s borders with Israel and Jordan. It means that the approximately 7,500 US special operations forces troops currently in Jordan will be shifted northward into southern Syria.

Russia had originally planned to deploy Syrian military, pro-Iranian Shiite militia and Hizballah forces in battles for the capture of land around the cities of Derra and Quneitra on the Syrian side of the Golan. That plan has been dropped and will be superseded by the deployment in southern Syria of US troops accompanied by Jordanian special forces and Syrian rebels, trained by American instructors in Jordanian military camps.

Israelis will breathe a sigh of relief over the removal of the threat of Iranian and Hizballah forces being deployed along their northern border with Syria.

The Trump-Putin deal for Syria and its ramifications are explored in the coming issue of DEBKA Weekly (for subscribers) out Friday, with especially attention to the way it leaves Iran and Hizballah high and dry.