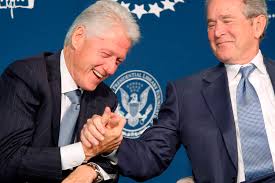 Donald Trump has been scathing in his criticism of President George W. Bush for the Iraq war that then  New York Senator Hillary Clinton supported.

Recently, it was reported that  George H.W. Bush — though a Republican–said he supports Hillary Clinton for president.

Did the Bush family know of and perhaps even have in the their possession the damaging 2005 Access Hollywood tape of Donald Trump making lewd comments, and arrange for its release to do maximum damage to the Trump campaign, just days before the second U.S. presidential debate?

It may seem farfetched until one considers to whom  Trump was speaking on the Access Hollywood bus while wearing a “hot” microphone that day in 2005: Billy Bush —  a Hollywood pretty boy / television anchor who happens to have a rather exceptional political pedigree

Though largely unreported in the press, Billy Bush’s uncle is George H.W. Bush, the 41st President of the United States, who earlier in his long political career served as the Director of the Central Intelligence Agency.

Here’s a little of what Wikipedia says about Billy Bush’s father:

On May 15, 2004, The Washington Post published an article that said, “A political Web site written by a Democratic operative drew attention yesterday to the fact that President Bush’s uncle, Jonathan J. Bush, is a top executive at Riggs Bank, which this week agreed to pay a record $25 million in civil fines for violations of law intended to thwart money laundering.”[5]

The bank accounts under investigation may have been Saudi, though the article did not say so. It did, however, go on to say: “…a source familiar with the multiple federal investigations of the bank’s Saudi accounts and other embassy accounts say Jonathan Bush’s investment advice unit has ‘no relationship whatsoever’ with any of the Riggs’s Saudi accounts.” Moreover, the newspaper quoted a spokesman for the Office of the Comptroller of the Currency as saying “any suggestion of political influence in the Riggs situation is ‘preposterous.'”

In 1991, Bush was fined $30,000 in Massachusetts and several thousand dollars in Connecticut for violating registration laws governing securities sales. He was barred from securities brokerage with the general public in Massachusetts for one Theyear.[6]” 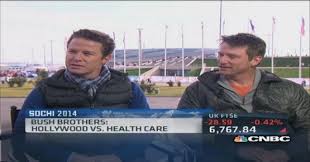 Some in the media have  questioned the timing of the release of the 2005 Access Hollywood video suggesting it was intended by Clinton campaign and the Democrats to mitigate the impact of damaging details contained in the emails released by Wikileaks exposing Clinton corruption, greed, and criminality at the State Department and the Clinton Foundation.

Given the overt hostility of the Republican leadership towards Donald Trump there is good reason to believe there may be much more to this story.

One can be sure Billy Bush must have well remembered his  conversation with Donald Trump in 2005 and the fact it was recorded.  At what point did he share the details of the eleven year old recording with his father, uncle, cousins, and brother as he surely must have?  At what point were the details made known to Hillary Clinton whose candidacy his uncle is supporting?

The fact that its release to the public was withheld during the Republican primary suggests that Jeb Bush may not have been a serious candidate; perhaps because Hillary Clinton’s presidential anointment may have had wide bipartisan support among the elite governing class all along.

Recently released Wikileaks emails suggest that Hillary Clinton was especially eagar, even desperate for Donald Trump to win the Republican primary, apparently confident that he would be far easier to defeat.  It’s easy to see why.

Certainly, the powerful and influential Bush family must have understood that the recording was damaging enough, followed by an onslaught of salacious accusations, to propel even Hillary Clinton into the White House. 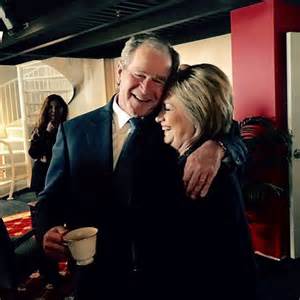 How Access Hollywood Tried (and Failed) to Protect Billy Bush

Somebody messed up Access Hollywood’s plans for a huge scoop. The NBC-owned show was aiming to break the story of Donald Trump boasting about sexual assault on its show, but the Washington Post beat it to the punch, reports the Wrap’s Sharon Waxman. Instead, Access Hollywood found itself reporting on the tape after the Post published the full exchange. Yet what was notable about Access Hollywood’s coverage is how much of Billy Bush’s role in the conversation it left out from the tape it put on air.

The video broadcast by Access Hollywood leaves out a few choice statements by Bush, including when he says, “Sheesh, your girl’s hot as shit — in the purple. Yes! The Donald has scored. Whoa, my man!” in a description of the actress Trump was about to meet. Plus, Access Hollywood attributes a part of the conversation to Trump that the Post said was “another voice, apparently Bush’s.”

Although Access Hollywood had the tape, it didn’t plan to air it before the debate, according to CNN, which says the earliest it could have aired was Monday night. NBC sources tell CNN they think it was someone at NBC who leaked the video to the Post.

Bush has said he’s “horribly embarrassed” by the tape, but so far at least there are no signs he could lose his job as a result. “Obviously I’m embarrassed and ashamed. It’s no excuse, but this happened eleven years ago—I was younger, less mature, and acted foolishly in playing along. I’m very sorry,” Bush said in a statement. It seems NBC agrees with that line. “It happened 11 years ago,” an NBC source tells the New York Post. “Billy was in a different place. He was a lot younger and more immature. He’s definitely embarrassed by this, but his job at Today is safe.” The Wall Street Journal also confirms NBC isn’t planning to reprimand Bush, who is reportedy going to be addressing the tape on the Today show on Monday.

How long had Access Hollywood been sitting on the tape? Not as long as you might think. Turns out a producer only remembered the interview on Monday after the Associated Press published a story quoting former Apprentice employees, according to CNN.