Efforts are afoot to expedite Turkey’s entry into the EU, even is it is undergoing rapid and radical Islamization with the support of the Obama White House, Germany and EU leaders — even, as many Turks fear and suspect, that it may increasingly come to resemble the Islamic State as a result of it’s deep ties and sponsorship of militant extremists in Syria and elsewhere, and Erdogan’s attacks on Turkey’s secular, civil society.

Imagine the result.  The Islamic State, the Caliphate, vis-à-vis Turkey, becoming a de facto member of the European Union.

China in Syria? Ready to Join Russia in ISIS fight

“If Assad asks, China can deploy troops to Syria”

Chinese Uyghur terrorists establishing base in Syria
A new article reported that 3,500 Uyghurs are settling in a village near Jisr-al Shagour that was just taken from Assad, close to the stronghold of Turkistan Islamic Party (TIP) that is in the Turkey-backed Army of Conquest. They are allegedly under the supervision of Turkish intelligence that has been accused of supplying fake passports to recruit Chinese Uyghurs to wage jihad in Syria.
The news comes on the heels of TIP capturing a Syrian airbase and acquiring MIG fighter jets as well as other advanced weaponry, similar to ISIS capturing Iraqi army’s advanced US weaponry.
It also comes on the heels of the Bangkok bombing at the shrine frequented by Chinese tourists, with Thai authorities now drawing a link to Uyghurs “and the same gang that attacked the Thai Consulate in Turkey” in reference to Turkey’s Grey Wolves.
This seems to corroborate IHS Jane’s analyst Anthony Davis’s assessment that Grey Wolves are the likely culprit, given their anti-Chinese protests and violent demonstration back in July.
Through Turkey’s support for the Army of Conquest, TIP has risen to prominence within the anti-Assad coalition and played a key role in defeating the Syrian army at Jisr al Shughour earlier this year.
The most prominent TIP fighter to emerge from the Jisr al Shughur videos was the spokesman for TIP’s “Syria branch” since 2014, Abu Ridha al-Turkistani.  In the videos he led fighters to take over a building, and climbed a clock tower to plant a black-and-white Jabhat al Nusra style flag on which “Turkistan Islamic Party” was written in Arabic.
These Uyghur militants have claimed a series of high-profile terrorists attacks in China in 2013 and 2014, with some Uyghurs calling for an intifada against the Chinese communist regime.
Now that TIP has established a base in Syria and is expanding its presence and recruitment courtesy of its Turkish sponsors, China will have to follow through with its 2013 recommendation “Take fight to ETIM before threat grows” and deploy troops to Syria.
Non-interference does not mean inaction on core interests
[…]
It is not difficult for China to take action when its core interests are threatened–that means violation of its sovereignty, territorial integrity, economic development and regime survival.
At the 2011 IISS Asia Security Summit, Chinese Defense Minister Liang Guanglie spelled out China’s core interests as the following: “The core interests include anything related to sovereignty, stability and form of government. China is now pursuing socialism. If there is any attempt to reject this path, it will touch upon China’s core interests. Or, if there is any attempt to encourage any part of China to secede, that also touches upon China’s core interests related to our land, sea or air. Then, anything that is related to China’s national economic and social development also touches upon China core interests”.
If the TIP continues to gain power within the Army of Conquest that is a jihadi witches brew of various al Qaeda affiliates and salafist extremists, Xinjiang may become the next Afghanistan and follow the pattern of Afpak, Syria/Iraq, with local militant forces/cross border havens attracting foreign fighters, and enjoying material and diplomatic support from Turkey and other outside powers with shared ideology/interests.
Moreover, the Assad regime is currently still the legal and UN-recognized government of Syria, despite only holding 1/3 of its territory. If Assad asks and gives permission for Russia, China and other SCO members to assist him militarily, that would be in accordance with international law.
This differs from the current US-led anti-ISIS coalition airstrikes in Syria that is neither operating under a UN mandate nor permission from the sovereign government, although it enjoys implicit permission to some extent from the Assad regime to fight ISIS. In 2014 Britain’s David Cameron hesitated to participate in Syrian airstrikes precisely due to fears of violating international law.
Turkey’s proxy war with China
With Erdogan waging an Islamist proxy war on China, Kurds, Assad, Sisi, Netanyahu via Al Qaeda affiliates, Army of Conquest, Muslim Brotherhood, Hamas, it is no wonder Syria and Egypt both applied to join the China-led SCO in June this year.
Thus Syria and China both share threats from the Army of Conquest that is attacking Assad and China’s Xinjiang. As Peter Lee noted, it is also worrying for the Chinese that when Palestinian President Abbas visited Erdogan’s new presidential palace in January 2015, the honor guards of 16 soldiers dressed in historical warrior costumes included a Uyghur. 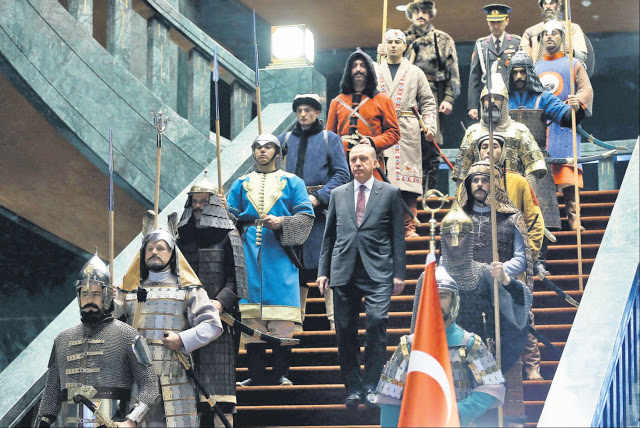 Each warrior represents one of the 16 “great (or historic) Turkish empires” commemorated on Turkey’s official seal, one of which is the Uyghur Khanate that had subjected the Tang Dynasty to a de facto tributary relation when the Chinese empire was weak. 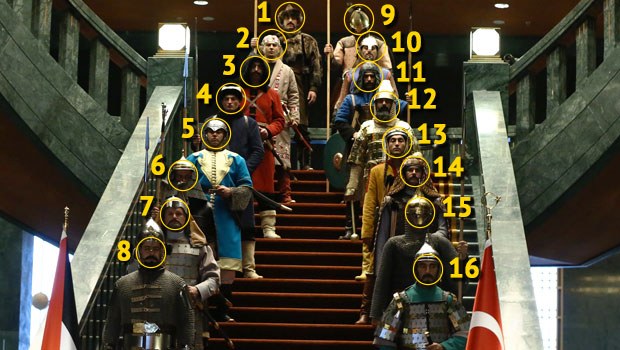 Thanks to Hurriyet, we know that the Uyghur warrior was the sixth man from the top of the steps on the left.
With Erdogan expanding Turkey’s influence in Syria and ambitions to reconstitute the “Turkic world from the Adriatic Sea to the Great Wall” of China, should SCO aspirant member Syria request aid and grant permission, China can indeed march its troops across the Silk Road to “take the fight to ETIM before threat grows.”
http://fortruss.blogspot.jp/2015/09/china-in-syria-ready-to-join-russia-in.html