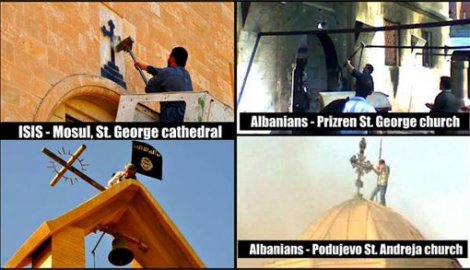 With the US-led NATO occupation of  the Serbian province of Kosovo came the wanton destruction of Serbian churches, monasteries, and other sacred monuments.  This pattern has become only too familiar, wherein evidence of the early foundational history of human civilization is being obliterated.

It is in line with the systematic and comprehensive destruction of the human historical record perpetrated by the Islamic State (ISIS) in Syria and Iraq, the Taliban in Afghanistan, the Muslim Brotherhood  in Egypt, and, of course the Arabs in the Israel, who routinely ransack and plunder ancient Jewish archeological sites, and destroy and desecrate the sacred burial grounds and graves of the Jewish people.

Recently Arabs in Judea and Samaria set fire to Joseph’s Tomb.  It’s been a favorite target of the followers of the PLO for sometime now. 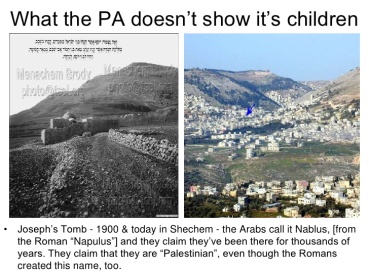 In a similar fashion, the US-German backed Albanian leaders of the stolen Serbian province of Kosovo have been engaging  in a campaign of cultural genocide of Serbian history and culture going back many centuries.

Incredibly, they are being considered for membership in UNESCO — even as many of the churches they destroyed were under UNESCO protection.

At this rate, UNESCO might as well offer membership to the Islamic State and the Taliban. 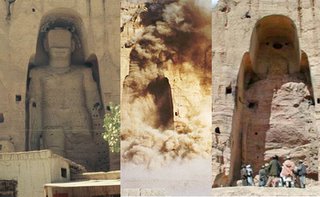 The Students office in Kosovska Mitrovica started the campaign “No Kosovo’s membership in UNESCO’ Profile on Instagram, but it was soon removed because the images of the burned and destroyed Serbian churches were characterized as ” disturbing content “.

Nemanja Bišševac, one of the students who lead this office said that the profile on Instagram was deleted with an explanation that contained a disturbing pictures.

– “We were told that we are posting the images which are disturbing but we’ve just posted the truth – burning and destruction of Serbian churches, monasteries, sacred monuments, tombs and so on – said Biševac. 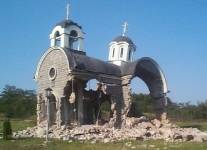 The wish of the Serbian Orthodox people of our diocese is to share this land of God with all the people of good will and to preserve their centuries-old shrines, beautiful works of art, and their Christian tradition as the common heritage of Christian Europe. http://www.kosovo.net/diocese.html

The campaign “No Kosovo’s membership in UNESCO,” led by the student office in Kosovska Mitrovica collected 130,000 signatures in a week on a petition distributed online via social networks. Biševac told Tanjug that their goal is to collect 200,000 signatures by the 9th of November, when expected vote on the proposal for Kosovo’s membership in UNESCO is taking place at the General Assembly Conference.

– We are working hard with all social networks on activating people to sign the petition – said Biševac.

An online petition, sharing images and video material on social networks is only part of the activities within the student struggle against Kosovo’s admission to UNESCO. Students have taken concrete steps – establishing contacts with the media and delegations officials of  UNESCO and their embassies in Serbia and Bosnia and Herzegovina, which were sent letters and testimonies about the suffering of Serbian cultural heritage in Kosovo. He said that answers have not yet been received, but that for example some media in Kenya conveyed news of the action of the students against the admission of Kosovo to UNESCO because journalist were near the embassy of a state that will vote at the General Conference of UNESCO when students addressed the other media.

Efforts of the students of the Pristina University, with temporary headquarters in Kosovska Mitrovica joined in their campaign by the university students in central Serbia, Montenegro and the Serbian Republic.