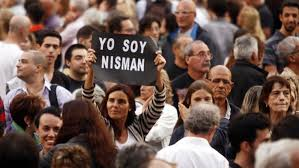 Argentinians have taken to the streets to voice outrage over the suspicious shooting death of  the Special Prosecutor Alberto Nisman.  His investigation revealed a deep cover-up that according to phone-taps, involved the President of Argentina.  But, his investigation did much more.  It also exposed the global scope of Iran’s criminal activities, engaging in corruption, fraud, intimidation, terrorism and murder with virtual impunity.

“Thousands took to the streets of Buenos Aires on Monday to protest the death of AMIA lead investigator Alberto Nisman, who was found dead in his apartment on Sunday. Nisman had been investigating the bombing of a Jewish community centre AMIA that killed 85 in 1994, and had accused Argentinean President Cristina Fernandez of shielding Iranian suspects. ”