Within a week of the catastrophic earthquake and tsunami striking Japan on Friday March 11, 2011, the United States was flying bombing missions over Libya because, so the story goes, Qaddafi might massacre his own people in Benghazi.

Seemingly inspired by the Tom Cruise movie “Minority Report,” the American President appeared to be acting on the uncanny premonitions of his own trio of ‘precogs’ kept, one supposes, secretly soaking in a warm jacuzzi somewhere beneath the White House.

Brushing aside the required congressional authorization, American President and Noble Peace Prize winner Barak Obama explained to the American people and the world why he needed to go to

We knew that if we waited one more day, Benghazi – a city nearly the size of Charlotte – could suffer a massacre that would have reverberated across the region and stained the conscience of the world. It was not in our national interest to let that happen. I refused to let that happen.

Meanwhile in Saudi Arabia, as fate would have it, Riyadh had also been experiencing some nasty aftershocks of its own also emanating out of Japan. Up until the earthquake, oil prices had been climbing sharply in reaction to the unrest erupting across the Middle East. Oil companies and oil exporting nations alike were enjoying their own special ‘Arab Spring’ in the form of surging oil profits and burgeoning stock prices.

Suddenly, with much of Japan and its industry in horrifying chaos and ruin and at least three nuclear reactors near meltdown and spewing radiation, oil imports to Japan plummeted— taking with it the exhilarating oil profits that only days before were the highest they had been in 2½ years.

The pain for the Saudis was palpable; the third largest importer of oil in the world after the United States and China had been abruptly, and indefinitely, taken offline.

As the immensity of the devastation enfolded and death toll mounted in Japan, a shaken Saudi family was moved to act—and act fast.

But that alone wasn’t enough. That’s because the Saudis had just announced plans for huge subsidies to their military and clergy at an estimated price tag of $129 billion.  They needed a 23% higher return on their oil sales — about $15.50 more per barrel according to experts — just to “breakeven”.

Without this increase in oil revenues, the Saudi family wouldn’t be able to cover the lavish payoffs to those they rely on to crush dissent by those tried and true methods of faith and force in and outside the Saudi Kingdom— the only country in the world, it is said, to be named after a family.

Kuwait’s breakeven oil price had risen too, and by a lot. According to the Gulf Times, “Middle East turmoil has also spurred Kuwait, the fifth-biggest producer in the Organization of Petroleum Exporting Countries to sweeten benefits for its population.” The benefits included cash handouts “and free food for 13 months” for every Kuwaiti citizen.

The situation soon caught the attention of Bloomberg News, the Gulf Times reported, which then sought the opinions of six analysts including that of Leo Drollas of the Centre for Global Energy Studies in London and Francisco Blanch of Bank of America Merrill Lynch in New York.  All agreed. The old break-even price of $68.50 a barrel just wasn’t going to cut it any longer for the Saudis.

“We think high oil prices are here to stay,” Francisco Blanch of BoA Merrill Lynch said, estimating that the Saudis needed a price of $95 for their oil.

“Saudi Arabia is “terrified” in the wake of higher budget commitments that prices will collapse, especially if it brings too much additional oil to market, Drollas said. They need higher prices to cover spending, and they restrict supplies to

“Terrified” or not, openly restricting oil supplies in the midst of a devastating worldwide economic crisis to finance their new welfare for repression program would be politically indelicate to the say the least.

Still something had to be done.

By happy coincidence, President Obama’s preemptive ‘prevent-a-massacre’ bombardment of Libya, with a modest initial outlay (courtesy of the U.S. taxpayer) of just 115 Tomahawk cruise missiles launched under the “Responsibility to Protect” doctrine, soon sent oil prices soaring—more than making up for the Japanese shortfall in demand.

The Libyan spigot of its highly prized light sweet crude was on its way to being cutoff—indefinitely.

Not surprisingly, the Saudis were only too happy to step in to ‘cover’ the shortfall in supply, but now at wildly exorbitant war profiteering prices.

With oil prices back on track, Saudi Arabia was soon doing better than just breaking even, much better –like beyond your wildest %#$@* dreams better.

And so too, as it happens, was Iran.

Over at the United States Institute for Peace (USIP), a person by the name of Fareed Mohamedi offered an intriguing, if little noticed,

analysis on how the unrest in the Middle East was effecting Iran. The turmoil in the Middle East—and Libya in particular—Mohamedi declared, would result in nothing less than a financial and political bonanza for Iran’s rulers. Mohamedi puts it this way in his report:

The sudden rise in oil prices amid uncertainty and upheavals in the Middle East could create a political cushion for Iran.
Prices are likely to stay high and volatile as long as protests, and concerns about supply disruptions continue across the region. The global economy has limits on what prices it can handle. But Iran will clearly benefit multifold from higher prices, especially given its own economic problems.

Without producing even one extra drop of oil, Mohamedi explains, Iran was positioned to win and win big; Nato strikes on Libya, as it turns out, were doing wonders for the Mullah’s bottom line,

The supply interruption out of Libya has helped increase the oil prices to over $110 per barrel. This is in stark contrast to the prices that dropped below the $40 per barrel lows in late 2008 […]

That’s an increase of over $70 per barrel. Mohamedi was talking a price hike of well over 100%.

Physical disruptions in the Middle East—such as the current supply interruption in Libya—can potentially enhance Iran’s sales program through both increased prices, and the ability to sell crude that , it has stockpiled owing to it being overpriced by the National Iranian Oil Company (NIOC).

Nice. It gets better.

The increased revenue from surging oil prices, Mohamedi explains, would give Iran the means to expand its national budget and foreign currency reserves. And, like Saudi Arabia and Kuwait, the higher oil income would also help Iran finance various subsidies such as the recent cash handouts “to the bulk of the population” thus buying political support for the ruling elite – ironically the very thing that Gaddafi had been widely criticized in the western media for doing.

Mohamedi asserts that the higher oil revenues were likely to help Iran entice otherwise reluctant oil companies to finance the development of some of its languishing oil fields and, with the continuing turmoil driven ‘shortages,’ “…reduce the enthusiasm with which Europe and the United States push for an oil embargo on Iran.”

Incredibly, only one year earlier the demand for oil had sunk so low Iran was forced to store its excess crude offshore on “19 very large crude carriers (VLCCs) and one smaller suezmax tanker…” according to an article published by Reuters in April of 2010.

“A VLCC” Reuters explains, “can store up to 2 million barrels of crude oil,” double the amount a suzemax can hold. Assuming all twenty of the crude carriers were filled to capacity, that’s some 39 million barrels of oil anchored off Iranian shores with no buyers in sight; an amount that doesn’t include the crude presumably stored on land. 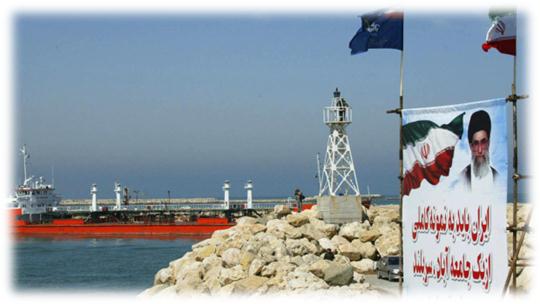 Of course, the problem with Iranian crude is that it’s like Saudi Arabian crude; it’s okay, but not great—sort of (well, one imagines) like unrefined molasses is to maple syrup. Reuters explains the difference,

Much of Iran’s crude is heavy and has a high sulfur content making it harder and more expensive for refiners to convert to valued transport fuels. “One theory is they are having trouble selling the cargo,” a shipping source said. “It would be due to lack of demand for some heavy Iranian crude.”

Little wonder than, this “most active state sponsor of terrorism” was only too eager to join NATO in helping the Libyan ‘rebels’ launch a war to snuff out Qaddafi in a nasty, sulfur-soured spate of crude, oil, envy.

In fact, according to a debkafiles report, as early as February— well before the first barrage of American Tomahawk missiles were sent whizzing across Libyan skies –the Iranians were already down on the ground doing their part to take out their competitor.

Citing military and intelligence sources, the Iranians were in Libya arranging a little creative financing of the ‘rebel’ cause of their own through the purchase of ‘unconventional’ weapons pillaged from the Libyan army.

Shortly after the uprising began in the third week of February, a secret Iranian delegation arrived in Benghazi. Its members met rebel chiefs, some of them deserters from the Libyan army, and clinched the deal for purchasing the entire stock of poison gas stock and the price.

Tehran reportedly saw it as a “unique opportunity to get hold of Libyan ruler’s stock of poison gas after it fell into opposition hands and arm Hizballah and Hamas with unconventional weapons without Iran being implicated in the transaction” while also quietly “throwing” its “support behind the anti-Qaddafi rebels.”

Not only had the Iranians saw a way to help finance the anti-Qadaffi ‘rebels,’ but arm Hamas and Hizballah, its Sunni and Shite Arab militias in Gaza and Lebanon.

Ultimately, whatever the Iranians paid the Libyan ‘opposition’ in exchange for the nerve and mustard gas shells, it was clearly incidental to the spectacular windfall the war in Libya would bring in increased oil revenue – especially once the NATO air strikes began. It was, for Iran, a win–win—win situation.

Not surprisingly, Iran’s Arab proxies wasted no time in securing their coveted order of Weapons of Mass Extermination.

“Hizballah and Hamas purchasing missions” debka reports, “arrived in the first week of March to finalize the deal and arrange the means of delivery” of the looted Libyan poison gas shells.

Iran’s activities in Libya were not particularly news to Washington where an acknowledgement of sorts was made according to debka,

The first authoritative American source to refer to a Hizballah presence in Benghazi was the commander of US NATO forces Adm. James Stavridis. When he addressed a US Senate committee on Tuesday, March 29, he spoke of: “telltale signs of the presence of Islamic insurgents led by Al-Qaeda and Hizballah” on the rebel side of the Libyan war.  He did not disclose what they were doing there.

One supposes the Admiral’s intelligence had to be pretty good, if necessarily vague.

But such an illicit, seemingly unthinkable alliance between the U.S. and Iran was hardly unprecedented. In fact, it was par for the course.