Lest anyone be swayed or misguided by the damning conclusions of the IMF, Saudi Arabia (whose humanitarian impulse is perhaps best exemplified by their brutal blockade, white phosphorous bliztkrieg, and ethnic cleansing of the oppressed and impoverished Houthi minority in a massive air offensive aptly code-named OPERATION SCORCHED EARTH ) countered with a clearer, more palatable analysis of the real threat to global security.

“There is no other regional conflict that has a greater impact on world peace,” proclaimed Omar bin Ali Al-Oyaidi, the acting charge d’affairs for the Saudi Kingdom at the United Nations than “that [of] the Arab-Israeli conflict.”

It was a declaration sure to stir the ire of every well-heeled, I-phone toting academic, student activist, Code-Pink socialite, Ron Paul racist, Norquist Conservative, and National Socialist leaning “Leftist”—especially those suckling away at the ample Saudi teat (or was it that other organ?) by way of the tens of millions of dollars it, and other Gulf nations, give in endowments, grants and contributions to NGOs, charity front groups, student organizations, political campaigns, presidential libraries, Think Tanks and Middle Eastern study departments – influencing policy, weighting scholarship, silencing dissenting voices, determining faculty appointments, and otherwise spiking prestigious wells of ‘knowledge’ at top-tiered Universities across the United States and in the UK.

Soon, as powerful oil interests were taking a financial wrecking ball to the world’s already teetering economy and NATO was moving into its fifth month of pulverizing Libya with massive bombing offensives that reportedly involved profit yielding attacks on Libya’s valuable oil installations by both NATO warplanes and Al-Qaeda led—Iranian backed “rebels”, the media was consumed, yet again, with colorful accounts of another oh so daring Muslim Brotherhood-Turkish “aid” armada steaming towards Gaza to “break” the “fascist” Israeli naval blockade: a ploy that held about as much peril as a Caribbean Cruise unless, that is, you happened to have been one of some thirty known Turkish IHH battle hardened Islamic militants aboard the Mavi Marmara during the previous flotilla wielding knives, chains, and iron bars set on ambushing a small detachment of IDF soldiers carrying only side arms and paint guns whose only aim was to safely divert the vessel to a port of call for inspection.

The truth, of course, was that the stunt was considerably more than a “nonviolent” propaganda ploy; it was an act of war; a calculated “humanitarian” pretext for Erdogan’s (or was it NATO’s) opening salvo against the State of Israel.

That the blockade was all but nonexistent but for the largely Egyptian enforced ban on weapons—so long, that is, imports cleared customs at the usual ports of entry, was long deemed irrelevant among activists; Hardly unexpected from a movement long characterized by scarce little truth, and ample omission.

A rare Associated Press article published in August in 2011 entitled Rise of Gaza Middle Class Fuels Resentment Toward Hamas Rulers, Say Wealth Isn’t Trickling Down exposes just some of the many complicating details deftly left out of the usual anti-Israel diatribes.

Contrary to popular the narrative, a wealthy Arab elite has since emerged in Gaza, reports A.P. that is “flaunting its wealth, sipping coffee at gleaming new cafes, shopping for shoes at the new tiny shopping malls, and fueling perhaps the most acrimonious grass roots resentment yet toward the ruling Hamas movement.”

The A.P. article notes that Arab Palestinian “tunnel traders” in Gaza “requested anonymity” during the interview, not because they feared discovery by the rapacious, blood thirsty Jews, but “because”, the report says, they used the tunnels to “dodge Hamas taxes”.

“Hamas has become rich at the expense of the people.” bitterly complained one young, struggling Arab seamstress in Gaza, too afraid to reveal her identity the article explains. An understandable fear given the frequency with which Hamas has been engaging in arrest, torture, and even execution of journalists, political opponents and those women still daring to flout traditional Islamic dress and behavioral norms that have been aggressively enforced since Hamas seized power.

Yet, not only does Hamas have an abundance of supporters in academia, and among ‘activists’, libertarians, and leftists, it also boasts influential proponents perched high in the upper echelons of the American policy making establishment, like former Secretary of State Madeline Albright, who, as head of the Leadership Group for the U.S.-Muslim Engagement Project is reportedly championing 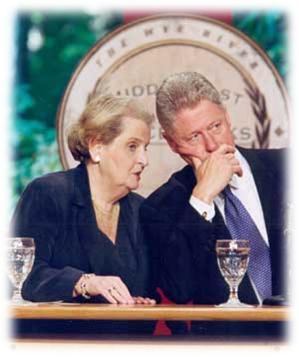 “engagement” with the terrorist organization (mirroring, as some might remember, her earlier involvement with the Kosovo Liberation Army), even as their leaders openly invoke the Holocaust as a preferred means of ending the Arab-Israeli conflict—a “solution” that is faithfully in keeping with their ancient scripture based charter; its core aims predating Israel’s internationally recognized restoration of sovereignty by some 1,400 years:

The hour of judgment shall not come until the Muslims fight the Jews and kill them, so that the Jews hide behind trees and stones, and each tree and stone will say: ‘O Muslim, O servant of Allah [of God], there is a Jew behind me, come and kill him’.

The American aid comes in addition to the enormous funding it receives from both Iran, Qatar, and Saudi Arabia among others, which perhaps explains why Hamas was especially vocal in its endorsement of the obscenely lucrative US-Arab-Iran war to overthrow Gaddafi ( Yet another telling contradiction that somehow escaped the notice of the pro-Hamas Left, when “protesting” the war against Libya).

Just from Iran alone, Hamas had been receiving $300 million annually—a generous contribution made all the more affordable by the crushing “jizya” the planet now pays “with willing submission”.