Not surprisingly, the Leadership Group for the U.S.-Muslim Engagement Project headed by former Secretary of State Madeline Albright boasts a number of distinguished members possessing an impressive array of credentials from the oil industry. According to its web site, they include,

Red Cavaney, President and Chief Executive Officer, America Petroleum Institute : In addition to heading the American Petroleum Institute, Red Cavaney is the current Director of the United States Energy Association and Buckeye Technologies, Inc., and former Director of the Boards of the U.S. Chamber of Commerce and the National Association of Manufecturers, among others…[…]

Other members committed to this curious cause of U.S. engagement with a religion include Catholic convert to Islam, Ingrid Mattson, and Imam Feisal Abdul Rauf. 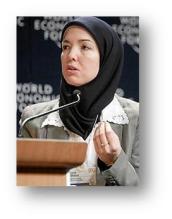 held the position of President of the Islamic Society of North America (ISNA).

named an “unindicted co-conspirator” in the “Holyland” Hamas financing trial, which, like Hamas, is a creation of the Muslim Brotherhood.

Financed largely by Saudi money, ISNA is said to hold the mortgages to more than half of the mosques in North America where it vigorously promotes the Wahhabi strain of Islam, disseminating rabidly anti-Semitic, anti-Christian and anti-Marxist “lessons” on a par with Nazi World War II propaganda using instructional materials published by the Kingdom of Saudi Arabia, in line with the extremist, bigoted teachings of the Muslim Brotherhood whose members received positions as teachers in Saudi Arabia after having been driven from Egypt.

John Loftus, a former United States Attorney with the Department of Justice and author of many highly acclaimed books including including The Belarus Secret (1982), spent decades investigating and exposing Washington’s covert policy of allowing thousands of known Nazi war criminals to immigrate to the United States. Recently, he shed light on the origins of the Muslim Brotherhood and the relationship of Hamas to it in a speech he gave in 2011:

Despite its fascist pedigree and the abject revulsion and terror it inspires in hearts of Arab Marxists, secularists, feminists, Muslim reformers, and Arab Christians all too familiar with its ruthless, frequently murderous methods across the Muslim world, the Obama administration, like the Bush administration before it, have been promoting the Muslim Brotherhood in a big way; euphemistically lauding it as a “moderate” organization, backing its expanding influence in Egypt, Libya, Tunisia, Syria and elsewhere, placing individuals with close ties to it in highly sensitive and influential positions in the U.S. Administration, like Secretary of State Hilary Clinton’s close personal aid of some twelve years, Huma Abedin.

It was a policy decision championed well in advance of the “Arab Spring”, taken up by the Soros funded International Crisis Group (ICG)

which boasts among its members Samantha Power, Zbignew Brzezinski, and Kofi Annan as well as former Supreme Commander of NATO and onetime Democratic candidate for

bombing of Serbia in collusion with Islamists, and the eventual occupation of Kosovo by NATO troops.

Mohamed ElBaradei–who would later be the designated “moderate” opposition candidate

ostensibly favored by Washington during the Arab Spring Cairo protests, protests that would pave the way for the rapid ascension of the Muslim Brotherhood to power–is also a member of the International Crisis Group.

In addition to serving as the moderate bait for the Islamist switch in Egypt, Mohammed ElBaradei has been useful in other respects.

From December 1997 to November 2009 Elbaradei served as the Director-General of the International Atomic Energy Agency (IAEA). In this capacity he has been publicly dismissive of the threat posed by Iran’s rapidly progressing nuclear program as a counter to Israel’s concerns, a position consistent with that of his ICG colleagues Samantha Power, and Zbigniew Brzezinski. In an interview with France’s Le Monde newspaper he candidly summarized his purpose as chief nuclear watchdog: “I want to get people away from the idea that Iran represents a clear and present danger…”

In 2008, well before the Egypt’s protests, the International Crisis Group issued this policy edict for Egypt:

The three-year clash between the government and the Muslim Brothers is damaging Egypt’s political life. Ending this confrontation and moving towards the long-term goal of integrating the Brothers into the political mainstream is a far better option. The regime should recognise the Muslim Brothers’ ambition to create a legal political party, take the opportunity to set clear standards for integration and end its campaign of mass arrests, made possible by the draconian Emergency Law. For their part, the Muslim Brothers should finalise and clarify their political program in order to reassure their critics.

In short, the International Crisis Group was in fact advocating the formal creation of a Fascist party in Egypt even as it would later forward one of its own members as a “moderate” candidate. Not surprisingly, the Muslim Brotherhood welcomed the ICG’s endorsement and support:

Judging by the newly inaugurated President’s speech in Cairo for which he insisted members of the Muslim Brotherhood be provided preferential seating in the front, Obama had clearly gotten the memo.

Not surprisingly, all this had not gone unnoticed in Egypt, which was becoming increasingly vocal in its alarm, and distrust of U.S. policy in the region according to U.S. diplomatic communications coming out of Cairo:

Indeed, Mubarak himself was questioning the implications of having removed Saddam Hussein from power, as he had been serving as an critical, if repugnant, bulwark against Iranian expansionism. He also clearly understood that Hamas [a militant wing of the Muslim Brotherhood] was a dangerous instrument of Iran: