Why the Anglo-American Special Relationship Must End

Throughout the 19th century, Americans generally had a much better understanding of their anti-colonial origins than is the case today.

Even though the last official war fought between Britain and the USA occured between 1812 and 1815, the British failure to destroy the United States militarily caused British foreign policy to re-focus its efforts on undermining the republic from within.

This slower attack from within required more patience, but was much more successful and led to the near collapse of USA during the Civil War of 1861-1865 when Lord Palmerston quickly recognized the Southern slave power’s call for independence from the Union.

Britain not only provided munitions, intelligence, and crown territories in Canada to serve as Confederate Intelligence stations, but nearly came in openly fighting alongside the Confederacy. This danger was only subdued thanks to Russia’s intervention on the Union’s behalf in 1863.

As the war raged, none other than Lord Robert Cecil (three times Prime Minister) told the British Parliament:

“The Northern States of America never can be our sure friends because we are rivals, rivals politically, rivals commercially…With the Southern States, the case is entirely reversed. The population are an agricultural people. They furnish the raw material of our industry, and they consume the products which we manufacture from it. With them, every interest must lead us to cultivate friendly relations, and when the war began they at once recurred to England as their natural ally.”

Britain’s covert military support for the Confederate cause was exposed by the end of that war and led to Britain’s payment of a $15 million settlement to America as part of the Alabama Claims in 1872.

As the informative 2010 Lpac documentary “The Special Relationship is for Traitors” showcased, during the early 20th century, leading American military figures like Brigadier General Billy Mitchell understood Britain’s role in supporting the Confederacy and Britain’s manipulation of global wars.

General Mitchell fought against the “special relationship” tooth and nail and led the military to create “War Plan Red and War Plan Orange” to defeat Britain under the context of an eventual war between the English-speaking powers. These plans became official US military doctrine in 1930 and were crafted in response to Anglo-Canadian plans to invade the USA that had been drafted ten years earlier (known as Defense Scheme 1). Despite the name, it is admitted by even the most ardent anti-American historians that these plans were entirely offensive in nature, as no prior US plan to invade Canada then existed.

War Plan Red was only taken off the books when America decided it was more important to put down London’s “Fascist Frankenstein threat” than fight Britain head on in WWII.

The Rhodes Scholars Take Over

Before the “Churchill gang” (that Stalin accused of poisoning FDR) could take control of America, Franklin Roosevelt described his understanding of the British influence over the US State Department when he told his son:

“You know, any number of times the men in the State Department have tried to conceal messages to me, delay them, hold them up somehow, just because some of those career diplomats over there aren’t in accord with what they know I think. They should be working for Winston. As a matter of fact, a lot of the time, they are [working for Churchill]. Stop to think of ’em: any number of ’em are convinced that the way for America to conduct its foreign policy is to find out what the British are doing and then copy that!” I was told… six years ago, to clean out that State Department. It’s like the British Foreign Office….”

With FDR’s death, these British operatives took over American foreign policy and wiped out the remaining pro-American forces in the State Department, disbanding the OSS and reconstituting America’s intelligence services as the MI6-modelled CIA in 1947.

As outlined in my last report on CSIS and the Round Table Origins of the Five Eyes, this new Anglo-American special relationship coincided with Churchill’s launching of the Cold War with his infamous Fulton Missouri speech of March 5, 1946. It was on this same day that the UKUSA Signal Intelligence Agreement was also signed giving birth to the modern incarnation of the Five Eyes intelligence apparatus.

In 1951, the Chicago Tribune published a incredible series of exposes by journalist William Fulton documenting the cancerous penetration of hundreds of Oxford Trained Rhodes Scholars who had taken over American foreign policy and were directing America into a third world war. On July 14, 1951 Fulton wrote:

“Key positions in the United States department of state are held by a network of American Rhodes scholars. Rhodes scholars are men who obtained supplemental education and indoctrination at Oxford University in England with the bills paid by the estate of Cecil John Rhodes, British empire builder. Rhodes wrote about his ambition to cause “the ultimate recovery of the United States of America as an integral part of the British empire.”

The late diamond and gold mining tycoon aimed at a world federation dominated by Anglo-Saxons.”

A star pupil of William Yandall Elliot (a leading Rhodes Scholar based out of Harvard) was a young misanthropic German academic named Henry Kissinger.

A decade before becoming a Knight of the British Empire, Kissinger gave a remarkable speech at a May 1981 event on British-American relations at London’s Royal Institute for International Affairs.

At this event Kissinger described the opposing world views of Churchill vs. Roosevelt, gushing that he much preferred the post-war view of Churchill. He then described his time working for the British Foreign Office as Secretary of State saying:

“The British were so matter-of-factly helpful that they became a participant in internal American deliberations, to a degree probably never practiced between sovereign nations…

In my White House incarnation then, I kept the British Foreign Office better informed and more closely engaged than I did the American State Department… It was symptomatic”.

As Kissinger spoke these words, another anglophile traitor was being installed as Vice-President of the United States. George H.W. Bush was not only the son of a Nazi-funding Wall Street tool and former director of the CIA, but was also made a Knight of the Grand Cross and Order of Bath by Queen Elizabeth in 1993. The most disastrous foreign policies enacted under Reagan’s leadership during the 1980s can be traced directly back to these two figures.

Just as both Kissinger and Bush were taking turns celebrating the birth of “The New World Order” in 1992, nests of Oxford Rhodes Scholars were flooding into the Presidency led by Oxford roommates Bill Clinton and Strobe Talbott, both of whom also championed the New World Order doctrine from 1992 onward.

The Potential Revival of the ‘Real’ America

Think what you may of Donald Trump. The fact is that he was the first president in decades to have seriously challenged the Anglo-American special relationship, expelled the British Ambassador to the USA (Sir Kim Darroch) while not starting any wars which a Jeb or Hillary were happy to launch.

Trump had reversed a regime change program active since 9/11, gutted the National Endowment for Democracy operations across the world, cut the CIA’s operation to arm anti-Assad ‘rebels’, detached the CIA from having involvement with conventional military functions while re-orienting the USA into a cooperative relationship with both Russia and China.

In an April 2019 press conference, the former president stated:

“Between Russia, China and us, we’re all making hundreds of billions of dollars’ worth of weapons, including nuclear, which is ridiculous. I think it’s much better if we all got together and didn’t make these weapons those three countries I think can come together and stop the spending and spend on things that are more productive toward long-term peace.”

Trump undid decades of World Trade Organization neoliberal financial programs by re-establishing the role of the nation state in economic affairs, severed the USA’s security doctrine from NATO, and he attempted to rebuild productive industries by reviving the protective tariff and organized arctic development strategies via the US-Alberta-Alaska railway and $350 billion US-China Trade Deal. The latter deal was directly targetted by none other than George Soros who labelled both Xi Jinping’s China and Trump’s USA as the two greatest threats to his Open Society vision during his January 2020 Davos speech.

Trump detached the USA from the World Health Organization, cancelled the Paris de-carbonization accords and made the nation energy self-sufficient for the first time in decades.

No one should doubt that President Trump has problems, but unlike the Rhodes Scholar-managed presidency of Joe Biden, being a British asset is not one of them.

The Only Remedy to an Anglo-American Dystopia

If you’ve made it this far, you shouldn’t be surprised by my thesis that the destruction of the Anglo-American Special Relationship would be the greatest blessing to both the USA, and the world. Even the British citizens themselves would benefit immensely if this supranational power structure were to lose its influence over the American dumb giant. Perhaps under this climate of a reduced oligarchical system of controls, genuine patriotic movements in England could organize themselves around a proper Brexit and national development strategy that abandons such out-dated notions as “Global Britain”.

Russia, China, India and other nations of the world are quickly organizing themselves under the new cooperative framework whose operating principles were beautifully outlined in President Putin’s recent keynote address at the Eurasian Economic Union Summit of May 26, 2022.

In his speech, which should be read in full, Putin stated:

“The Greater Eurasia is a big civilisational project. The main idea is to create a common space for equitable cooperation for regional organisations. The Greater Eurasian Partnership is designed to change the political and economic architecture and guarantee stability and prosperity on the entire continent – naturally, taking account of the diverse development models, cultures and traditions of all nations.”

If there is anything viable to come out of the USA from this point onward, it will need to be through the re-activation of those potent policy orientations which Trump had brought online during his beleaguered term as President. This must be done while re-orienting the USA away from the Anglo-American doctrine of World Government and towards a cooperative policy alongside partner nations of Eurasia and the Global South.

Matthew Ehret is the Editor-in-Chief of the Canadian Patriot Review , and Senior Fellow at the American University in Moscow. He is author of the ‘Untold History of Canada’ book series and Clash of the Two Americas trilogy. In 2019 he co-founded the Montreal-based Rising Tide Foundation . 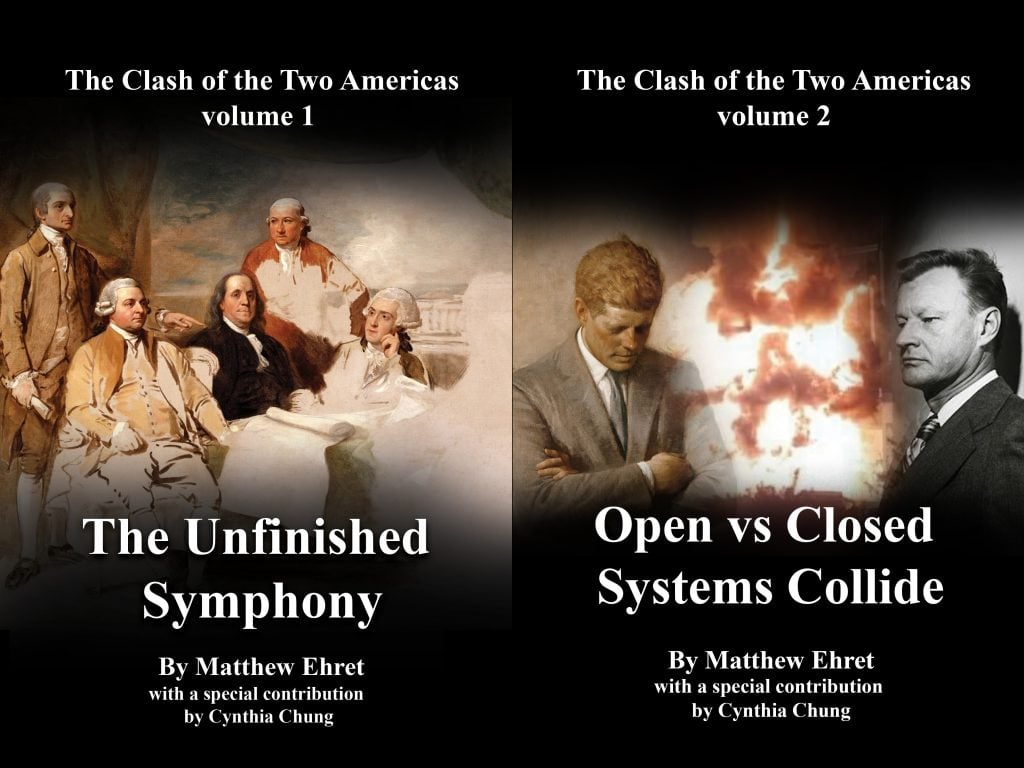 The Clash of the Two Americas

In his new two volume series The Clash of the Two Americas, Matthew Ehret introduces a new analysis of American history from the vantage point that the globally-extended supranational shadow government that managed the British Empire was never fully defeated and has acted within the USA itself since 1776 as a continuous multi-generational fifth column managing every significant event and assassination of American presidents for the next 250 years.