Scratch an environmentalist, a climate activist and what you’ll find is a eugenicist, as in someone who wants YOU DEAD, ideally before you have a chance to reproduce…hence the unrelenting drive to inject young children with a highly lethal biochemical agent, rebranded a vaccine.

Monbiot and people like him are nothing more than loyal foot soldiers, propagandists of the elite who are finding our numbers wholly unmanageable, given they are the rightful heirs to planet Earth…unlike you.

To them, we are nothing more than an infestation, vermin…to be eradicated… as Prince Phillip explained, one way or another:

“Human population growth is probably the single most serious long-term threat to survival. We’re in for a major disaster if it isn’t curbed… We have no option. If it isn’t controlled voluntarily, it will be controlled involuntarily by an increase in disease, starvation and war.” ― Philip, Duke of Edinburgh[1]

What better way to cause mass starvation than to outlaw farming…to, you know, save the planet…

George Monbiot says farming should be ABOLISHED to save the planet: Climate change activist says meat can be replaced with lab-grown food like protein pancakes

By James Robinson for MailOnline

Environmental campaigner George Monbiot has claimed farming should be abolished because meat can be replaced with food made out of lab-grown bacteria.

Writing in his latest book, the Guardian columnist said the world must do away with meat and dairy production because it is a ‘phenomenally profligate’ way to produce food.

The writer, who describes farming as the ‘most destructive force ever to have been unleashed by humans’, argues meat producers will not be able to sustainably keep up with the increase in global food demand. […]

Mr Wyn Jones, whose family have run a hill farm on the Carneddau mountain range in North Wales for more than 375 years, told MailOnline: ‘George thinks we can produce enough food from gloop pulled up from bacteria in the soil. I think he’s totally wrong.

‘I respect George, he is an intelligent person, but he has spent his whole life trying to destroy indigenous people – and that’s what farmers like me are –producing food across the UK.

Mr Wyn Jones, whose farm is organic and focuses on regenerative agriculture, added: ‘These are indigenous people who have been working these lands for generations in an environmentally friendly way.

Food produced from ‘thin air’ – literally: How bacteria could be the food of the future 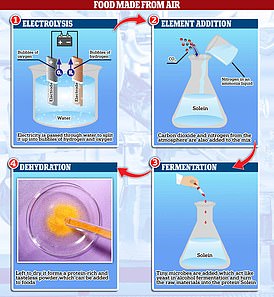 The Finnish scientists hope to use a type of bacteria found in soil to create or enhance food to make it rich with protein.

That bacteria will be be fed hydrogen, which in itself will be split from water (H20) by electricity.

It is hoped that if the electricity comes from solar or wind power, the bacteria can be grown with near-zero greenhouse gas emissions – also helping to tackle global warming.

The end product will be a protein flour – named Solein after its makers Solar Foods.

This will be used to reinforce foods such as pies, ice cream, biscuits, pasta, noodles, sauces or bread.

The protein flour could also nourish cattle to save them eating soya raised on rainforest land.

In 2020, Solar received 5.5million Euros in investment to expand its business.

In that same year George Monbiot praised the technology behind the scheme, as part of a documentary, Apocalypse Cow.

He said at the time: ‘Farmfree food creates astonishing possibilities to save both people and planet.

‘By temporarily shifting towards a plant-based diet, we can help buy the time to save species and places.’

Solar Foods aims to introduce the product to the market in early 2023 and is applying for novel food approval globally.

Meanwhile, other meat-free alternatives are also being pushed, including lab-grown meat, eating insects and turning to fungi-based products.