A Western Sydney official has compared the latest anti-Covid measures imposed on his area by the New South Wales (NSW) state government to the times of Nazi Germany. His comment, since removed, caused a rumpus on social media.

Mayor Steve Christou, of Cumberland City Council, tweeted an official graphic illustrating new lockdown rules on Friday. Having posted the image that warned residents of the mandate that requires them to have a permit to leave the region and to register their personal details to be allowed to visit a “singles buddy” within a five-kilometer (three-mile) reach, he wrote: “Welcome to Nazi Germany.” The comment from the councilor, who describes himself as having “a tendency to speak what I think,” was later deleted. 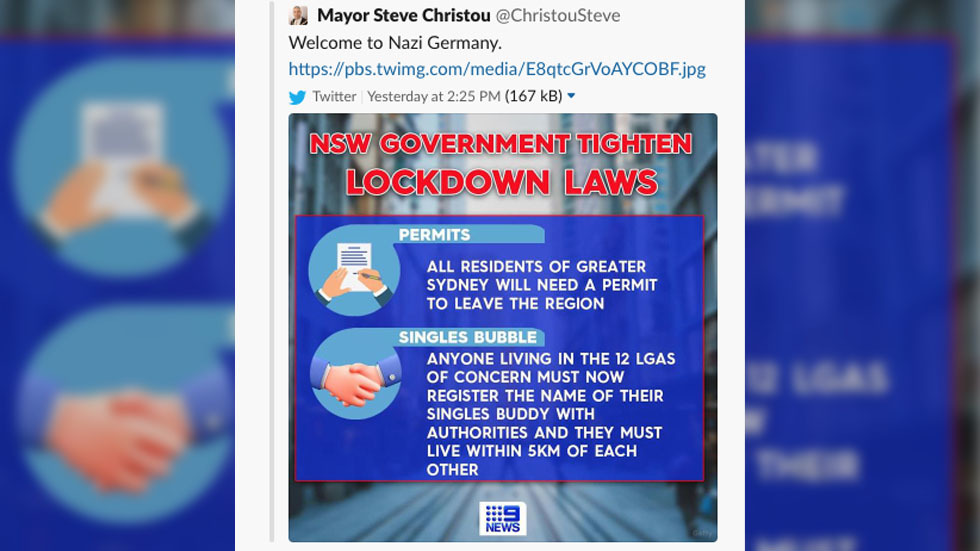 The official has previously expressed his opposition to the tightening of lockdown rules and any mandatory vaccination, describing the situation as “dictatorial madness.”

His latest provocative tweet was publicly available for long enough to elicit an array of reactions.

A number of commenters called for the mayor to step down, among them the NSW Minister for Police and Emergency Services, David Elliott, who said the comment was “the most abhorrent thing.”

Under the latest changes to the lockdown rules, residents of several areas of Greater Sydney, including Cumberland, have had their permitted travel radius reduced by half. Those wishing to go beyond that would have to apply for a permit. Only one person from each household, except in special circumstances, is allowed to leave home at any one time to undertake essential errands. Hundreds of defense force personnel, including heavily armed riot squad officers, have been deployed to ensure compliance with the rules. An additional 500 troops will patrol Sydney’s residential areas from Monday, as NSW’s law enforcement agencies launch their stay-at-home operation. Roadblocks have been installed, with police stopping drivers to check their identification documents in a major compliance exercise.