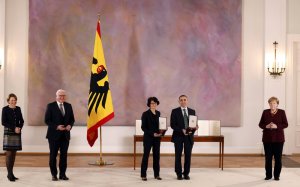 Germany…again. Only this time it’s global.

In addition to creating the Pfizer mRNA spike protein injection, these two ‘Prussian Turk’ scientists, Uğur Şahin and Özlem Türeci, also “became the first Turkish Germans among Germany’s top 100 wealthiest people list in 2020.[6]” It appears, they have been well compensated for their efforts.

Over breakfast, the couple decided to apply the technology they’d been researching for two decades to the new threat, dubbing the effort “Project Lightspeed.”

Within 11 months, Britain had authorized the use of the mRNA vaccine BioNTech developed with U.S. pharmaceutical giant Pfizer, followed a week later by the United States. Tens of millions of people worldwide have received the shot since December.

“It pays off to make bold decisions and to trust that if you have an extraordinary team, you will be able to solve any problem and obstacle which comes your way in real time,” Tureci told The Associated Press in an interview.

Along with Pfizer, the company enlisted the help of Fosun Pharma in China “to get assets, capabilities and geographical footprint on board, which we did not have,” Tureci said.

Among the lessons she and her husband, BioNTech chief executive Ugur Sahin, learned along with their colleagues was “how important cooperation and collaboration is internationally.” […]

On Friday, German President Frank-Walter Steinmeier awarded the wife and husband one of the country’s highest decorations, the Order of Merit, during a ceremony attended by Chancellor Angela Merkel, a trained scientist herself.