This is truly a brilliant scam. 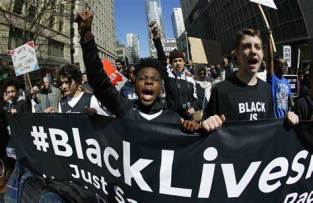 By 2016, the presidential election year where Hillary Clinton was challenging Donald Trump, Black Lives Matter had established itself as a well-organized network.

That year the Ford Foundation and Borealis Philanthropy announced the formation of the Black-Led Movement Fund (BLMF), “a six-year pooled donor campaign aimed at raising $100 million for the Movement for Black Lives coalition” in which BLM was a central part.

By then Soros foundations had already given some $33 million in grants to the Black Lives Matter movement. This was serious foundation money.

The BLMF identified itself as being created by top foundations including in addition to the Ford Foundation, the Kellogg Foundation and the Soros Open Society Foundations.

They described their role: “The BLMF provides grants, movement building resources, and technical assistance to organizations working advance the leadership and vision of young, Black, queer, feminists and immigrant leaders who are shaping and leading a national conversation about criminalization, policing and race in America.”

Notably, when we click on the website of M4BL, under their donate button we learn that the donations will go to something called ActBlue Charities. ActBlue facilitates donations to “democrats and progressives.”

As of May 21, ActBlue had given $119 million to the campaign of Joe Biden.

That was before the May 25 BLM worldwide protests.

Now major corporations such as Apple, Disney, Nike and hundreds others may be pouring untold and unaccounted millions into ActBlue under the name of Black Lives Matter, funds that in fact can go to fund the election of a Democrat President Biden.

Perhaps this is the real reason the Biden campaign has been so confident of support from black voters.

What is clear from only this account of the crucial role of big money foundations behind protest groups such as Black lives Matter is that there is a far more complex agenda driving the protests now destabilizing cities across America.

The role of tax-exempt foundations tied to the fortunes of the greatest industrial and financial companies such as Rockefeller, Ford, Kellogg, Hewlett and Soros says that there is a far deeper and far more sinister agenda to current disturbances than spontaneous outrage would suggest.

F. William Engdahl is strategic risk consultant and lecturer, he holds a degree in politics from Princeton University and is a best-selling author on oil and geopolitics, exclusively for the online magazine “New Eastern Outlook” where this article was originally published. He is a Research Associate of the Centre for Research on Globalization