An earlier Adara Press post proposed that General Flynn was likely targeted by the Obama administration because of the critical stance he had taken towards Iran.

Recent investigative reporting by Lee Smith in the Tablet appears to confirm this.

Obama and his minions wanted to conceal coordination between Iran and Al Qaeda. Additional evidence was thought to be on Osama bin Laden’s database, which was retrieved following his death.  Flynn had assembled a team to take a closer look.  Obama wasn’t having it.   Lee Smith explains why: 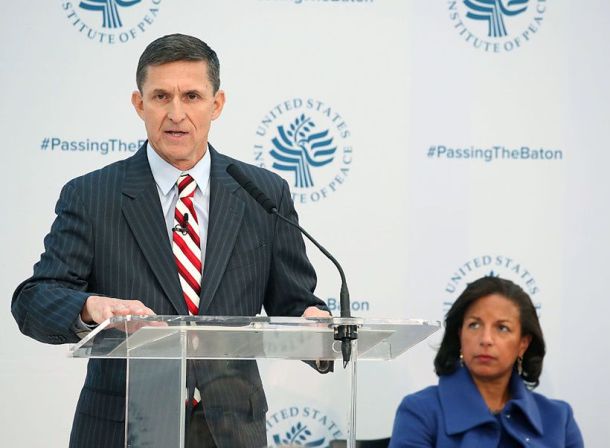 “[Flynn] secured access for a team of DIA analysts to scour through the documents that had been captured during the 2011 operation to kill Osama bin Laden.

“The bin Laden database was unorganized,” says a former senior DIA official. “There had been very little work on it since it was first captured. The CIA had done machine word searches to identify immediate threats, but they didn’t study it for future trends or strategic insight.” Flynn arranged for a team from United States Central Command, based in Tampa, Florida, to come up to Washington. The subject of their investigation was a potentially sensitive one. “We were looking for ties between al-Qaida and Iran,” says Michael Pregent, a former Army intelligence officer who was working on the bin Laden documents as a contractor.

“We’re arguing with everyone—NSA, whoever else—telling them what we wanted and they kept saying ‘there’s nothing there, we already went through it.’ The CIA and others were looking for immediate threats. We said ‘we’re DIA, we’re all-source analysts and we want everything to get a full picture.’”

Just as the CENTCOM team was preparing for their trip to Northern Virginia, they were shut down. “Everything was set,” says Pregent. “we had our hotel reservations, a team of translators, and access to all of the drives at the National Media Exploitation Center. Then I get a call in the middle of one of the NCAA basketball tournament games from the guy who was running our team. He said that [CIA Director John] Brennan and [National Security Adviser Susan] Rice pulled the plug.”

The administration was, it appears, clearing space for Obama to implement his big foreign policy idea—the Iran nuclear deal. Another aide, Ben Rhodes, had said in 2013 that the Iran Deal was the White House’s key second-term initiative. Evidence that Tehran was coordinating with a terror group that had slaughtered thousands in Manhattan and at the Pentagon would make it harder to convince American lawmakers of the wisdom in legitimizing Iran’s nuclear weapons program.

What was the information about al-Qaida’s ties to Iran that Flynn wanted his CENTCOM team to get out? According to published news reports, the bin Laden database included “letters about Iran’s role, influence, and acknowledgment of enabling al-Qaida operatives to pass through Iran as long as al-Qaida did its dirty work against the Americans in Iraq and Afghanistan.” One of those letters showed that “Al-Qaeda was working on chemical and biological weapons in Iran.”

Obama had gone to considerable lengths to aid Iran and then lie about it, as Lee Smith shows:

In 2012, the administration began secret negotiations with Iran. At the same time, the administration called off a multi-agency task force targeting the billion-dollar criminal enterprise run by Iran’s Lebanese ally, Hezbollah. The administration told Congress that the nuclear deal would not grant Iran access to the U.S. financial system, but a 2018 Senate report showed how the Obama White House lied to the public and was secretly trying to grant Iran that access. The Obama administration had misled Congress about secret deals it made regarding verification procedures, and then secretly shipped $1.7 billion in cash for Iran to distribute to its terror proxies.

At the core of this effort, was an intense hostility towards Israel, and the Jewish people the expression of which became increasingly overt as well as blatantly anti-Semitic in tone.  It also involved spying on Jewish Americans as well as Israelis:

Obama demonstrated to Jerusalem the gravity of his intentions every time an administration official leaked reports of Israeli raids on Hezbollah and other Iranian allies in Syria and Lebanon. That put the Israelis on the defensive, and also showed the Iranians that Obama could and would bring Israel to heel. Therefore, Tehran should trust him. […]

Obama’s talk of the pro-Israel lobby only got louder as his negotiators came closer to striking the deal. He was talking about the Jews, and to them. If they didn’t back the deal, the sewers would spill over with traditional anti-Semitic conceits about Jewish money and influence, dual loyalties, Jews leveraging their home country on behalf of their co-religionists, and fomenting war. This wasn’t a fringe White nationalist figure, but a popular two-term Democrat. John Kerry said it outright: If Congress failed to pass the deal, it would put Israel at risk of being “more isolated and more blamed.” There was no alternative to the deal, said Kerry, except war.

Nonetheless, Obama kept hammering away at his chosen messaging. In a speech at American University he argued there are only two choices: The Iran Deal or war. The one government that did not think this is “such a strong deal” was Israel.

If the smear campaign targeting Iran Deal opponents as rich, dual-loyalist, right-wing warmongers was the public face of Obama’s push for the deal, there was an even less savory component hidden within the advanced technology of the U.S. Intelligence Community: The administration was spying on its domestic opponents, American legislators, and pro-Israel activists. Noah Pollak—formerly head of the Emergency Committee for Israel, a nonprofit organization that opposed the nuclear agreement with Iran—says, “I was warned that my conversations with senior Israeli officials were possibly being monitored.”

Speaking to me for my 2019 book The Plot Against the President, Pollak said that “the administration did things that seemed incontrovertibly to be responses to information gathered by listening to those conversations.” He continued: “At first we thought these were coincidences and we were being paranoid. Surely none of us are that important. Eventually it simply became our working assumption that we were being spied on via the Israeli officials we were in contact with.”

A 2015 Wall Street Journal story provided details of the administration’s domestic espionage operation. “The National Security Agency’s targeting of Israeli leaders and officials also swept up the contents of some of their private conversations with U.S. lawmakers and American-Jewish groups,” explained writers Adam Entous and Danny Yadron. “That raised fears—an ‘Oh-s— moment,’ one senior U.S. official said—that the executive branch would be accused of spying on Congress.”

The names of Americans are minimized in transcripts of intercepted foreign communications to protect their privacy. For instance, an American swept up in an intercept might be referred to as a “U.S. Person.” It is not illegal or even necessarily improper for U.S. officials to deminimize, or “unmask,” their identities and find out who “U.S. Person” is, provided there are genuine national security reasons for doing so.

The story the Journal tells is evidence Obama officials knew what they were doing was wrong. In the account shaped by the Obama team, responsibility fell on the shoulders of the National Security Agency, responsible for the bulk of America’s signals intelligence. White House officials “let the NSA decide what to share and what to withhold,” according to the Journal story. “We didn’t say, ‘do it,’” a senior U.S. official said. “We didn’t say, ‘don’t do it.’”

Any use of NSA intercepts to target Jewish organizations and anti-Iran Deal legislators would not be an innocent mistake. Obama aides would know they were abusing surveillance programs ostensibly pointed at Israeli officials if they used them to know which US lawmakers and pro-Israel activists were planning to oppose the deal, what they were saying, and who they were talking to. Indeed, it appears that to get in front of the possibility that their domestic spying operation would be exposed, Obama officials leaked it to friendly reporters in order to shape the story to their advantage: OK, yes, we heard, but only by accident. And in any case, it was the NSA that passed it on to us.