On July 28th 1918, the 4th anniversary of the beginning of World War I, Serbian flag flew above the White House and all public buildings in American capital by the order of President Woodrow Wilson.

This unique event, a Serbian flag flying above the White House in Washington, took place over 9 decades ago but remained a memorable act of the US President Woodrow Wilson towards Serbia that submitted the ultimate sacrifice in “The Great War” – it lost 26% of its population and had a precedent in the war history when almost its entire population had to withdraw from their homeland.

Thanks to the great scientist Mihajlo Pupin, a friend of the American President, the work of the Serbian Mission in the States and Serbian representative in Washington, Ljubomir M. Mihailović, a series of manifestations took place in June and July, while the central event took place on July 28th, when the President Wilson gave the following message to the American people:

To the People of the United States:

On Sunday, 28th of this present month, will occur the fourth anniversary of the day when the gallant people of Serbia, rather than submit to the studied and ignoble exactions of a prearranged foe, were called upon by the war declaration of Austria-Hungary to defend their territory and their homes against an enemy bent on their destruction.

Nobly did they respond. So valiantly and courageously did they oppose the forces of a country ten times greater in population and resources that it was only after they had thrice driven the Austrians back and Germany and Bulgaria had come to the aid of Austria that they were compelled to retreat into Albania.

While their territory has been devastated and their homes despoiled, the spirit of the Serbian people has not been broken. Though overwhelmed by superior forces, their love of freedom remains unabated. Brutal force has left unaffected their firm determination to sacrifice everything for liberty and independence.

It is fitting that the people of the United States, dedicated to the self-evident truth that is the right of the people of all nations, small as well as great, to live their own lives and choose their own Government, and remembering that the principles for which Serbia has so nobly fought and suffered are those for which the United States is fighting, should on the occasion of this anniversary manifest in an appropriate manner their war sympathy with this oppressed people who have so heroically resisted the aims of the Germanic nations to master the world.

At the same time, we should not forget the kindred people of the Great Slavic race–the Poles, the Czechs and Yugo-Slavs, who, now dominated and oppressed by alien races yearn for independence and national unity.

This can be done in a manner no more appropriate than in our churches.

Even though President Wilson wanted the US to stay neutral in the Great War, the declaration of war against Germany was passed by the American Congress on April 4th 1917, after dreadful events and “The Zimmermann Telegram”, a diplomatic proposal from the German Empire to Mexico to enter the War as its ally.

Although the US never directly took part in battles across the Balkans, it was well informed about the events taking place along this front. Therefore, when Serbian Prime Minister Nikola Pašić suggested an official mission to be sent to the US with the aim to inform its government and the public about Serbia’s war missions, Washington soon replied that “the US Government will be pleased to welcome Serbian representatives as their guests”.

When Serbian flag flew above the White House

The Day When the Serbian and U.S. Flags Flew Together Over the White House

Relations between Serbia and the United States of America during World War I, the “Great War,” were as friendly allies. July 28, 1918, however, was especially important for Serbs and Americans. On this day America marked the fourth anniversary of the beginning of the Great War, when, according to the words of U.S. Secretary of State Robert Lansing, “honorable Serbian people were forced to defend their country and their homes against an enemy who wanted to destroy them,” and when the Serbian people, “sacrificed everything for freedom and independence.”

Americans clearly expressed their support and sympathy for the Serbian people from the very beginning of the Great War. During 1914, 1915 and 1916, enormous financial support and thousands of tons of humanitarian aid were provided to the Serbian people from the United States. There was money for food for civilians, for refugees, to fight typhoid, seed to plant for the next harvest, agricultural tools, and even funding to lease refugee transport ships. 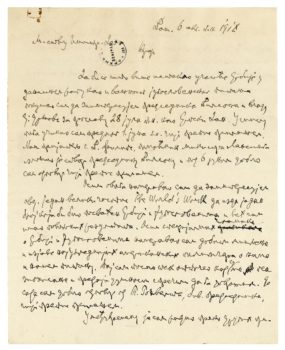 Serbian Ambassador Mihailovic sends detailed report to the Serbian MFA on the Serbian Day in Washington, including the description of the Serbian flag being raised above the White House.

The United States of America officially celebrated July 28, 1918 as “Serbia Day.” On July 27, U.S. Secretary of State Robert Lansing called on every American citizen to, “gather on Sunday, July 28 in their churches in order to express their sympathies toward this enslaved nation (Serbia) and their oppressed brothers in other countries and to invoke the blessing of the almighty God for them and cause that they are fighting for.”  Thanks to a report by the Serbian Ambassador to the United States and an article published in Detroit News, we know today that, “over the White House and other public institutions waved the Serbian flag for the first time.” Other than the American and Serbian flags, only one other has been flown over the White House. That was the French flag, on the 131th anniversary of the fall of the Bastille, on July 14, 1920.

Diplomatic Correspondence between The United States and Serbia

Forty-second U.S. Secretary of State Robert Lansing and Ljubomir Mihailovic, Serbian Ambassador to the U.S. in 1918

Serbian Ambassador Mihailovic’s telegram to the Serbian Government in Corfu

Serbian Ambassador Mihailovic’s telegram to the Serbian Government in Corfu

The Day When the Serbian and U.S. Flags Flew Together Over the White House