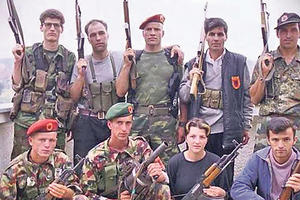 PROTECTED WITNESS KILLED IN PRISTINA: Removal of those who would testify against the so-called KLA

Forest inspector Nazmi Rustemi, whose body was found a month ago near Lake Badovac, was a protected witness for the Special Prosecution Office at the Special Court for the Prosecution of Crimes of Members of the Former So-called the KLA.

Forest inspector Nazmi Rustemi, whose body was found a month ago near Lake Badovac near Pristina, was a protected witness for the Special Prosecution Office of the Special Court for the Prosecution of Crimes of Members of the Former Kosovo Liberation Army.

Namely, as Pristina-based Albanian-language media Nazmi Rustemi, 63, from Pristina, investigated the Special Court for three months before he was found dead.

The disappearance of Rustemi, as reported by Kosovo police, was reported by his wife, Eljmaze, who said in a statement to Albanian-language Pristina media that the deceased, who worked as a forestry inspector in Pristina municipality, had had problems earlier and that he was threatened. a few years ago, unknown people started the car. Also, members of his family pointed out that during the Kosovo conflict, Rustemi was held hostage by the “KLA”.

Although they did not want to confirm the murder of Rustemi at the request of the Albanian media in Pristina, the KLA Special Tribunal in The Hague in The Hague reported, recalling numerous killings of potential witnesses before The Hague Special Court that is, several dozen liquidations of a person who was known to testify against former KLA members.

Otherwise, the Pristina media points out that although Rustemi’s death has not yet been elucidated, he was most likely killed in the straight because of his protected witness status and despite the Hague tribunal’s claim that a reliable witness protection system was in place.