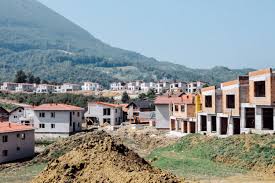 The ARABS BY LAWLESS BUILDING CONQUER BIH: They don’t need permits and they don’t fear the Inspector (VIDEO)

Investors, mostly from Arab countries, have been building a mass illegal settlement in Bosnia and Herzegovina by ignoring local laws and spatial plans, despite regulations and penalties, the Centre for Investigative Journalism (CIN) announced on Tuesday From Sarajevo.

The state in which it has been working so far has failed in a proper way to prevent power despite the rules that also include penalties of imprisonment for such behaviour. After months of research, CIN reporters collected data that testified that the wider area of Sarajevo became a promised land for the Arabs and Turks who build wherever they are not looking for any permits or consent, and they do not bear any responsibility.

According to CIN, at this point there are at least four settlements in the wider area of Sarajevo that are built “to wild ” in the area of total area of 133,000 four meters. So in the area of Iliyasha, a company from Kuwait called “Bosnian International for Tourism ” planned to build a total of 47 buildings, and so far they have illegally raised them 37. In the municipality of Vogošća, Turkish national, Hajri Genc, illegally built a settlement of 11 villas.

In the municipality of Stari Grad, investors from Qatar and the United Arab Emirates began building two separate lynts and up to now a total of 31 Fae, and planned to build more than 120 such facilities, and two of the hotels and two mosques.

Municipal construction inspectors have been checking the building and determining a number of irregularities, and primarily non-possession of the required permits. They have given measures to mess up the continuation of construction and ordered the demolition of the built-in buildings, but investors have simply discontinued, and municipalities have not reached a demolition because they fear that the investor will not be able to charge the large costs that it implies.

As it seems in practice, he clarified Mirza Ridjanovic, a construction inspector in Vogosca who controlled the construction site where Turk Genc invests and made a decision that the municipality should demolish it.

As soon as we close, it doesn’t work. The weekend, they continue to work–said Riđanovic, adding that he cannot always dežura in one place because he has a number of other commitments. He added that the municipality did not decide to collapse because it cannot communicate with the investor. Genc simply does not have any evidences of persons who reside in BiH, or know anything about him in the foreigners ‘ Affairs department.

The mysterious investor has so far “cut ” A fine of five thousand euros, but there is no confirmation that he paid for it. The Law on spatial regulation of Sarajevo County envisions the sentencing of prisons for “wild ” builders but not one such verdict has yet been made. In municipalities, they hope that such investors play with laws will not pay off because the raised objects will not be able to legate or be able to join the communal infrastructure.