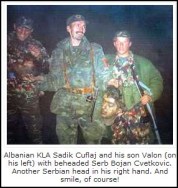 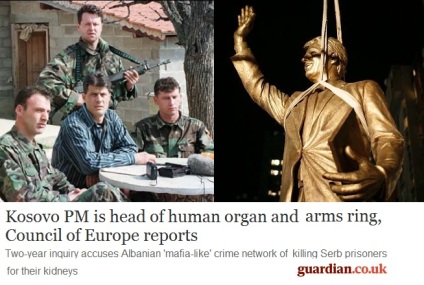 “A documentary produced by a Dutch television crew alleges Florin Krasniqi, an Albanian arms dealer, is buying weapons in the US and sending them to Kosovo – while perfecting contacts with the Democratic Party in the United States.

Mr Krasniqi is filmed at a Kerry fundraising event handing over a cheque, then chatting and joking with senior Democrats including Wesley Clark, the former NATO commander and Richard Holbrooke, Mr Kerry’s senior foreign policy adviser.”

Many border crossings into Kosovo by “foreign fighters” also have been documented and include veterans of the militant group Islamic Jihad from Bosnia, Chechnya and Afghanistan…”  What they don’t want you to know: The US – EU – NATO backed Kosovo Albanian regime links to al Qaeda and heroin trafficking | The Washington Times

“Back in 1998, … Krasniqi went to Pakistan to make weapons purchases… According to the latest book by Pakistani President Musharaff, Muslims consider war in Kosovo a Jihad. Krasniqi also funded the campaign of John Kerry and at the fundraiser Richard Holbrooke and Wesley Clark were also present chatting with Krasniqi and other former Muslim KLA members whom Krasniqi employed. Holbrooke and Clark extracted over $500,000 for Kerry on that fundraiser.

At one point during the fundraising Krasniqi called on to Wesley Clark to come join, both exuberant, telling Clark to shake hands because “This is your KLA”. Clark did not object to being identified as owner of that terrorist group. It would be interesting to find whether any of the arrested Muslim Albanians on the Fort Dix terror plot were ever a KLA?”

Joseph Dioguardi :  “But without final status nobody is going to make any real investments in Kosova.  And I would like to see the government of Kosova put more energy into final status.  Tell the world what you want. Don’t say that you declared independence in 1990. There was a referendum in 1991.  Tell them now. Say. Repeat it. We declare our independence now, because then everybody would work together on it. And thank you all for investing in Kosova now, because it is a somewhat risky.  But I think you’ll be the first ones to make a lot of money.”

JOHN Kerry has acquired a financial backer likely to provide him with more problems than support in his battle for the White House: the Kosovo Liberation Army.

A documentary produced by a Dutch television crew alleges Florin Krasniqi, an Albanian arms dealer, is buying weapons in the US and sending them to Kosovo – while perfecting contacts with the Democratic Party in the United States.

Mr Krasniqi is filmed at a Kerry fundraising event handing over a cheque, then chatting and joking with senior Democrats including Wesley Clark, the former NATO commander and Richard Holbrooke, Mr Kerry’s senior foreign policy adviser.

The documentary, broadcast last month in The Netherlands and seen by The Scotsman, follows Mr Krasniqi from his home in Brooklyn in New York to his Albanian base where he distributes arms to mercenaries on the Kosovo border.

Showing remarkable candour, Mr Krasniqi says the KLA has “unfinished business” with the Serbs and predicts that war will break out again in “about a year and a half” if the UN does grant Kosovo independence from Serbia and Montenegro.

The Kerry fundraising event is shown making a direct pitch for Albanian money. Mr Holbrooke warns in a speech that Mr Bush is planning to pull troops out of Kosovo – the implication being the Serbs would be unconstrained.

John Belushi, the Albanian-American actor, then appears in a video soliciting donations. “If you care about the fate of Albanians in the Balkans, I hope you’ll do anything to can to make sure John Kerry is elected as our next President,” he says.

The documentary goes on to show Mr Krasniqi buying guns from a dealer in St Mary’s, Pennsylvania.

With frankness bordering on the brazen, he explains to the film crew how easy it is to smuggle arms. “We had set up a hunting club in Albania,” he says – and simply tell anyone who asks they are planning an excursion to Tasmania.

He admits being “caught twice” – by Italian and Swiss authorities – but allowed to proceed after saying the Albanian hunting club was preparing for an expedition to hunt elephants in Tasmania. Other arms are smuggled under humanitarian aid, he says.

While there is no suggestion that Mr Kerry had knowledge about the funds being donated by Mr Krasniqi, the video will be deeply embarrassing for the Massachusetts senator as he combats accusations of being soft on terror.

Mr Krasniqi is named in the Federal Election Commission returns as a registered donor to the Kerry campaign at his Brooklyn address. The sum is dollars 1,000. The Kerry-Edwards campaign was asked to comment, but did not return calls to The Scotsman yesterday.