Arab terrorists targeting Jews for extermination were given safe haven by French intelligence.

Surprising?  Not so much.

To quote one Jewish commentator: “Europeans don’t kill Jews with their own hands now, but with other people’s…” Muslims have become the ideal surrogate for European anti-Semitism—the righteous executioners of the Jews.

Many more atrocities followed the grisly slaughter of Jews at the Kosher Restaurant in Paris in 1982, no doubt facilitated by the safe sanctuary France provided for them to operate.

The chief spy of France may have made the deal, but knowledge of the arrangement went as high as the office of François Mitterrand, the president.  His Chief of Staff was in the know, despite denials to the contrary. 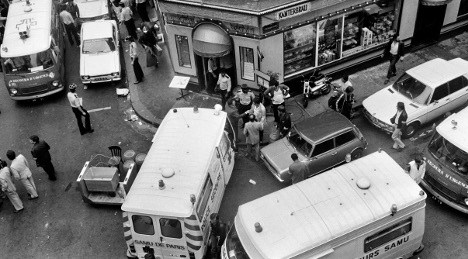 On Friday, the newspaper Le Parisien reported that the former head of French intelligence, Yves Bonnet, had admitted to making a secret pact with the terrorists, guaranteeing Abu Nidal operatives free movement within France in exchange for a promise of no further attacks on French soil.

According to Le Parisien, Bonnet made his confession in January this year to the magistrate in charge of investigating the Jo Goldenberg attack, for which no person has yet been convicted.

“We made a kind of verbal deal in which I said, ‘I don’t want any more attacks on French soil and in return I’ll let you come to France and I guarantee nothing will happen to you,’” the paper quoted Bonnet as having said.

The pact was allegedly reached during a clandestine meeting shortly after the attack between Bonnet and representatives of the Abu Nidal group — not the terrorists who executed the massacre, he claimed, but individuals he described as their “stooges.”

According to Bonnet, the pact “worked,” insofar as there were no attacks on French soil “from late ’83, ’84 and until the end of 1985,” he said. Among the concessions made during that time by the DST, the French intelligence service, was the permission for two Abu Nidal terrorists to visit one of their comrades in a French prison.

Le Parisien added that it had partially confirmed Bonnet’s claim of a pact with Abu Nidal with two former DST officials, Jean-François Clair and Louis Caprioli. The paper said it had been told by Clair that he did “not deny that there were contacts with Abu Nidal, to do so would be lying.”

Also in the loop, the paper said, was Gilles Menage, the chief of staff to the then President of France, François Mitterrand — although the official position was that the Élysée Palace “did not know anything” about the contacts with Abu Nidal, a renegade Palestinian faction that was armed and funded by Iraq at the time of the rue des Rosiers attack. Abu Nidal’s long list of atrocities also included the Sept. 1986 shooting at the Neve Shalom synagogue in Istanbul, Turkey, that killed 22 worshippers, and the December 1985 simultaneous attacks on US and Israeli airport counters in Rome and Vienna, which killed 18 people and injured 111.

Friday’s revelations about the possible collusion between Abu Nidal and French intelligence came on top of another significant, if frustrating, development in the rue des Rosiers investigation earlier this year. In May, Jordan’s highest court rejected a French appeal for the extradition of one of the suspected terrorists, 57-year-old Nizar Tawfiq Mussa Hamada.