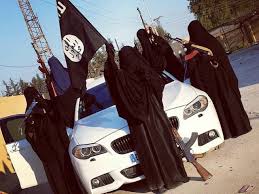 “…EUROPOL is particularly concerned about the return of women and children who have been indoctrinated in the previous period and have been trained in territories that were under the control of the Islamic State…Someone sent these people here, and sooner or later they will contact their fighters and use them for their goals. They are trained, dangerous…”

The Western Balkans, according to the agency’s data, is considered a transit route for returnees from the Syrian and Iraqi battlefield, and EUROPOL is particularly concerned about the return of women and children who have been indoctrinated in the previous period and have been trained in territories that were under the control of the Islamic State.

EUROPOL says the Western Balkan countries have reported that “The radicalised communities, some of which are composed and from returnees from the conflict between Syria and Iraq ” exist as “The jihadist community ” in Montenegro, and the case of a Serbian citizen is quoted as saying Convicted in Austria for terrorism and the return of several women and children, but also a man, a BiH citizen from Syria, quoted Radio Free Europe report as saying.

Terrorism expert Xhevad Galijasevic says the biggest threat in this region is that the state authorities incorrectly identify returnees by calling them migrants.

-Migrant is the face that legally enters the country in order to improve living conditions. A refugee is a person entering another state to save life. For us, however, people come, they are like migrants, and avoid communication with the homestates. In a vast number of cases, it is the defeated Al-Qaeda fighters and the Islamic State–explains Galijasevic, with a note that he who insists that the people coming, the migrants, are unaware of the risk.

According to some data, ISIL at the height of military power had about 200,000 fighters, and Al-Qaeda over 100,000. Today, there are between 20 and 30 thousand, so the question is where the others are.

Galijasevic says this is not about humanitarian matters.

-Someone sent these people here, and sooner or later they will contact their fighters and use them for their goals. They are trained, dangerous and extremely interpreted by faith. Today, in their violent actions, they mostly turn to each other–according to our spokesman, and emphasizes that it is symptomatic that most do not have ID documents, but they all have multiple payment cards and mobile phones. Tens of thousands of people are not sent, according to experts, to, let’s say, endanger Bosnia and Herzegovina but to jeopardise the security of the EU, primarily Germany and France, as the largest force.

Among the people entering the countries of the region are many without clearly identified identities, it is a young male person from 20 to 35 years and only seven or eight percent of them are women and children.

-They’re not ordinary women, housewives. They are past religious and military training, are radicalised, trained for explosives. They are used to convey the message, to be couriers-explains Galijasevic, saying the force will be used sooner or later in EU countries.

Galijasevic argues that Serbia’s security services are much more serious than those in BiH. In Serbia, anyone who enters, takes pictures, prints the fingerprints. When an identity cannot be established, it is a rule to send such persons to the migrant centres in which they have limited movement. In BiH, however, this is not the case, but migrants are placed in open centres, without supervision.

Our spokesman says that big mographs change religious images in BiH, the fresh radical elements are provided, and the most dangerous role is that newcomers change to radical right local Bosniaks.

According to the security-Information agency in Serbia, there are about 1,000 Wahhabi, and dozens can be regarded as hazardous to the country and citizens.
Read and…

DOZENS of WAHHABI are SERIOUSLY THREATENING SERBIA extremists “under Radar ” BIA, discovered as leaders of the movement of VRBUJU YOUTH

This group “on the Radar ” is a security-information agency that monitors their work in the field. As leaders of this movement there are people who have been educated at theological faculties in Saudi Arabia, Yemen, Malaysia, Egypt, and who have taken the expansion of extreme Islamic learning upon their return.

According to data from the EU police agency, three terrorist attacks that are planned to be conducted by chemical, biological, radiological or nuclear weapons (CBRN) and have been marked by an increase in terrorist propaganda that includes the production method Such weapons.

Expect on terrorism, Dzevad Galijasevic, warned that the terrorist have over 100 centers in Balkans and there is a daily danger in every country from terrorist attacks.

1.5 MILLION REFUGEES ARRIVING TO BALKAN IN AUGUST AND SEPTEMBER: Experts warn there are terrorists among them!

– There are 64 training camps in Bosnia and Herzegovina for terrorists and over 100.000 potential jihadists. There are camps like that in every country on Balkan. Besides Bosnia, most are stationed on Kosovo and Macedonia – he said for Informer, and then added:

– However, Serbia was not spared, since there are jihadists strongholds in Sjenica, Novi Pazar, Presevo, Bijanovac and Medvedja. In these camps, terrorists are training daily for attacks and murders. It is only the matter of time when  the order will arrive to make Balkan like some of the cities which were struck with terrorists attacks, like Brussels, Nice, Paris.

Galijasevic especially warned about the returning people from war front from Syria.

The truth is that 600 fighters of the Islamic state returned, even though safety services of Balkan countries try to hide and lower the number.

– Serbia is on the target for Islamic state, which has plans for Serbia and other Balkan countries to be the part of the Caliphate. Because of that, there is a constant threat from the terrorist attacks. And that is not only from the people coming back from the war, but the number increases of the people lurking withing Serbia – he said and continued:

– If you did not already know, Belgrade, Novi sad, Subotica, are all slowly becoming a central places for Jihadists. If we don’t stop this soon, we will have major safety problem in Serbia.

On the other hand, Minister of the police Nebojsa Stefanovic claims that the safety structures in Serbia are doing everything to protect its citizens from potential terrorist attacks.

– Serbia has been conducting measures for two years aiming to protect the citizens of our country from any potential terrorist attacks. We are carefully monitoring all the suspicious faces that may have any connection with terrorism and situation in Serbia is stable – he concluded.