Will he also seek to undo Bill Clinton’s  criminal legacy in the former Yugoslavia: In the illegally occupied Serbian province of Kosovo?

This Debkafile analysis raises the question. Unfortunately the situation  is not as fully and accurately explained as it might be, and therefore much about this article is misleading.

It would behoove Israelis to be more precise and historically accurate, given the serious misrepresentations to which they are similarly subject over the question of the ‘West Bank’, the ’67 border’, and the movement for a ‘liberated Palestine’ with Jerusalem as its capital.

Kosovo is a province of Serbia.

Serbia went to war against the U.S. – backed Kosovo Liberation Army:  Essentially an Albanian – Muslim version of the Arab-Muslim PLO that President Bill Clinton  — not coincidentally — installed into power in Judea and Samaria through the bogus Oslo Accords.

Following the massive, illegal 78 day bombardment of Serbia that led to its capitulation and the withdrawal of the Serbian military, NATO troops occupied the Serbian province and installed the Kosovo Liberation Army into power.

The KLA is a known Narco-terrorist group whose leader, Hacim Thaci, was implicated in the trafficking of organs harvested from Serbian captives, something known to NATO, and the U.S. State Department — including Hillary Clinton’s most senior aids while she served as Secretary of State under Obama (see email below).  The U.S. also built an immense military base in Kosovo:  Camp Bondsteel.

Not surprisingly,  U.S. backed Muslim Albanians in Kosovo–much like the U.S. backed Muslims in Bosnia–have also been joining the Islamic State in Syria in significant numbers.   One such Albanian, Lavdrim Muhaxheri (aka Abu Abdullah al Kosova)  became an ISIS Commander and has reportedly returned to Europe leading 400 ISIS fighters posing as Syrian refugees.

Up to now,  Washington has given significant support to Islamic extremists.  This bipartisan policy goes back decades.

The Albanian security forces that now control the Serbian province of Kosovo, in and of themselves, are likely no match for Serbia’s renown military acumen and relative might.

The more pertinent question concerns how the U.S. military would react with a new Commander and Chief in the White House apparently dedicated to eradicating Islamic extremism the presence of which in the Balkans is owed largely to the policies of Bill Clinton.

The Serbs it seems were on the verge of finding out when President Obama, on the very last days of his presidency intervened through the efforts of Vice President Biden, joined by Angela Merkel and the European Union.

Just six days before Donald Trump’s inauguration as US President, a Serbian train took up position on the Kosovo border. It was painted ostentatiously with the slogan “Kosovo is Serbian” in several languages along with national Serbian and Orthodox Christian emblems. 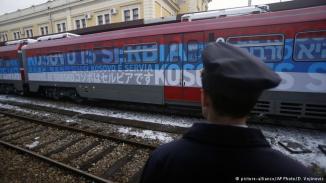 The train has been stationary since Friday, Jan. 14. Kosovan security authorities are blocking its advance along the new 213km long rail link from Belgrade to Mitrovica, a town in Muslim Kosovo which has a large Serbian population.

This is more than a symbolic reminder of the brutal Balkan wars of the 1990s. Two armies are already poised for battle: 60,000 Serbian troops, including armored, artillery and air force units, are on war preparedness, facing a much smaller Kosovo security force which, after calling up reserves, numbers around 6,000 combatants.

Serbian President Tomislav Nikolic beat a war drum this week when he declared: “If Serbians are killed, we’ll send our army to Kosovo.”

It was 19 years ago that Serbia signed an agreement for ending its war with Kosovo after NATO forces intervened and US warplanes bombed the Serbian capital of Belgrade into capitulation. The West recognized Kosovan independence, but Russia and China still view the country as an integral part of Serbia.

The Kosovo war was the sequel to the 1992-1995 conflict between Christian Serbia and Croatia, on one side, and Muslim Bosnia, on the other. This war was brought to a close after President Bill Clinton’s intervention forced Serbia to sign the Dayton Accords and cede broad areas of Bosnia to Muslim rule.

In sum, the Balkan conflicts of the 1990s saw many horrors, but also ended in American support for the establishment of independent Muslim enclaves in southern Europe. Orthodox Christian rule and territory, which were under Russian military, religious and national influence, were substantially downsized.
This policy was pursued systematically for 15 years by Presidents Clinton and Obama with the support of Chancellor Angela Merkel. It is widely seen today as the key which in recent years unlocked continental Europe to the influx of millions of Muslim migrants and refugees from the Middle East and Africa.

The Serbian train parked on the Kosovo border marked the end of the Obama era and underlined Belgrade’s non-acceptance of the borderline imposed in the last century on Serbia. The train is expected to cross that border after the Trump inauguration Friday, Jan. 20. If it is attacked by Kosovan security forces, the Serbian army will march in. And even if it is not attacked, the Serbian army plans to march behind the train across the border in a bid to eradicate one of President Clinton’s proudest achievements.

Indeed, a statue of Bill Clinton stands at the center of Pristina’s main square, in appreciation of his gift of Muslim independence and liberation from Serbian rule.
When it starts moving, the Serbian train will pose the new US president with his first test in dealing with an international crisis involving the Muslim issue before he has a chance to settle in at the Oval Office.

He will find on his desk an urgent note to the US and members of the European Union from Kosovo’s Foreign Minister Enver Hoxhaj asking for assistance against Serbian aggression. A similar SOS in 1998 brought a NATO elite force, consisting mainly of British units, rushing to Kosovo. In 2017, Kosovo can forget about help from any European government, even sympathetic Germany and France.

This is not just about the presidential transition in Washington. On June 12, 1999, Russian President Boris Yeltsin landed an army contingent at Pristinia airfield to put the brakes on Kosovo’s takeover by the West. The option of backing the Serbian train as it rolls into Kosovo is still available to his successor, Vladimir Putin.

His response will offer an important insight into the secret understandings reached between Trump and Putin for collaboration in the war on Islamist terror and the prevention of further Muslim expansion in Europe.