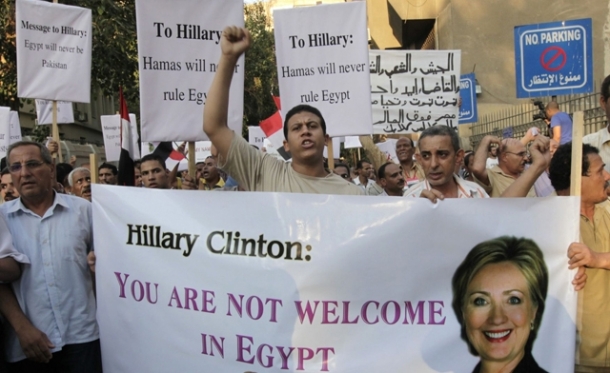 And what is the Muslim Brotherhood?   According to former U.S. Federal prosecutor John Loftus:

The Obama administration, like the Bush administration before it, have been promoting the Muslim Brotherhood in a big way; euphemistically lauding it as a “moderate” organization, backing its expanding influence in Egypt, Libya, Tunisia, Syria and elsewhere, and placing individuals with close ties to it in highly sensitive and influential positions in the U.S. Administration, despite its fascist pedigree and the abject revulsion and terror it inspires in hearts of Arab Marxists, secularists, feminists, Muslim reformers, and Arab Christians all too familiar with its ruthless, frequently murderous methods across the Muslim world.

It was a policy decision championed well in advance of the “Arab Spring”, taken up by the Soros funded International Crisis Group (ICG) which boasts among its members Samantha Power, Zbignew Brzezinski, and Kofi Annan as well as former Supreme Commander of NATO and onetime Democratic candidate for president Wesley Clark, former German Foreign Minister Joschka Fisher, and Former Secretary General of NATO and Socialist politician in Spain Javier Solana—all key players in the dismemberment of Yugoslavia, the bombing of Serbia in collusion with Islamists, and the eventual occupation of Kosovo by NATO troops. […]

In 2008, well before the Egypt’s protests, the International Crisis Group issued this policy edict for Egypt:

The three-year clash between the government and the Muslim Brothers is damaging Egypt’s political life. Ending this confrontation and moving towards the long-term goal of integrating the Brothers into the political mainstream is a far better option. The regime should recognise the Muslim Brothers’ ambition to create a legal political party, take the opportunity to set clear standards for integration and end its campaign of mass arrests, made possible by the draconian Emergency Law. For their part, the Muslim Brothers should finalise and clarify their political program in order to reassure their critics.

In short, the International Crisis Group was in fact advocating the formal creation of a Fascist party in Egypt …Not surprisingly, the Muslim Brotherhood welcomed the ICG’s endorsement and support:

Judging by Obama’s speech in Cairo for which he insisted members of the Muslim Brotherhood be provided preferential seating in the front, the newly inaugurated leader of the free world had clearly gotten the memo.

Not surprisingly, none of this had not gone unnoticed in Egypt, which was becoming increasingly vocal in its alarm, and distrust of U.S. policy in the region according to U.S. diplomatic communications coming out of Cairo:

The GoE [The Government of Egypt] remains skeptical of our role in democracy promotion, arguing that any efforts to open up will result in empowering the Muslim Brotherhood, which currently holds 86 seats — as independents — in Egypt’s 454-seat parliament.

Indeed, Mubarak himself was questioning the implications of having removed Saddam Hussein from power given that he had been serving as an critical bulwark against Iranian expansionism; Iran, after all, had long been understood to be actively colluding with the Muslim Brotherhood and its Palestinian arm, Hamas:

President Mubarak sees Iran as Egypt’s — and the
region’s — primary strategic threat. Egypt’s already dangerous
neighborhood, he believes, has only become more so since the fall
of Saddam, who, as nasty as he was, nevertheless stood as a wall
against Iran. He now sees Tehran’s hand moving with ease throughout the region, “from the Gulf to Morocco.” The immediate threat to Egypt comes from Iranian conspiracies with Hamas (which he sees as the “brother” of his own most dangerous internal political threat, the Muslim Brotherhood)…

Secretary of State Hillary Clinton in 2012 called the election of Egypt’s Islamist Muslim Brotherhood leader a “milestone” for Egyptian democracy and offered covert police and security help, according to declassified State Department documents.

The first key objective of the meeting was for Clinton to “offer our congratulations to Morsi and to the Egyptian people for this milestone in Egypt’s transition to democracy.”

Clinton then was meant to offer Morsi American technical expertise and assistance from both the U.S. government and private sector to support his economic and social programs.

Clinton’s talking points also included an offer of secret assistance to help Morsi “upgrade and reorient Egypt’s police force toward serving the needs of a democratic people.” The offer included sending a team of U.S. police and security experts to Egypt as part of a “framework of cooperation” that would be carried out “quite discretely.”

Also, the talking points reveal Clinton was ready to help launch an Egyptian-American Enterprise Fund, a private sector initiative of U.S. and Egyptian investors to help Egyptian businesses. The fund was to be launched with $60 million and would later involve Congress adding $300 million over five years.

The fund was created in September 2012.

Many pro-democracy Egyptians who had taken to the streets as part of the 2011 revolution that ousted long-time U.S. ally Egyptian President Hosni Mubarak viewed U.S. support for Morsi as a betrayal and part of a U.S. strategy of backing the Muslim Brotherhood in the region.

A second State Department document revealed that Deputy Secretary of State Thomas R. Nides wrote to Morsi on Sept. 24, 2012 seeking collaboration with the Egyptian leader on Syria and Iran.

“It was a honor to meet with you in Cairo,” Nides wrote in the letter. “We share the goal of growing our markets and increasing trade, as well as a desire for a stable, secure and peaceful region. As I said when we met, the United States also remains committed to helping Egypt address regional issues, including Syria and Iran.”

Both documents reveal that the State Department under Clinton had little understanding of the Islamist threat posed by the Muslim Brotherhood and its branches.

Andrew C. McCarthy, former assistant U.S. attorney in New York who prosecuted Islamist terrorism cases, said Clinton backed the Muslim Brotherhood over the Egyptian military, stating it was imperative that power be turned over to the winner of the election.

“The defining mission of the Muslim Brotherhood is the implementation of sharia,” McCarthy said. Sharia is Islamic law that critics say is antidemocratic and contrary to fundamental rights and freedoms

The documents were released under a Freedom of Information Act request seeking information on the Obama administration’s secret 2011 Presidential Study Directive-11, or PSD-11.

The directive, according to officials familiar with its contents, outlined how the administration would seek to support the Muslim Brotherhood around the world despite the Islamist supremacist organization providing the ideological underpinning for jihadist terrorism for both al Qaeda and its successor, the Islamic State.

U.S. backing for Morsi’s Muslim Brotherhood regime in Egypt was derailed by the Egyptian military a year after the meeting. Morsi, the first democratically elected head of state in Egyptian history, was ousted in a coup after he had sought to consolidate power by granting himself unlimited authority in what pro-democracy critics called an Islamist coup.

Egyptian military leaders arrested Morsi on July 3, 2013, after protesters took to the streets to oppose his rule. Abdel Fattah al-Sisi headed a military government and was later elected president.

The Muslim Brotherhood is an international organization founded in 1928 that adopted as its motto “Allah is our objective; the Prophet is our Leader; the Quran is our law; Jihad is our way; dying in the path of Allah is our highest hope.”

The leaders of the Brotherhood in September 2010 declared jihad, or holy war against the United States and Israel, six months before the Arab Spring uprisings in North Africa and the Middle East.

Clinton’s backing for Arab Spring states was guided by PSD-11 and produced ongoing disasters in the region, namely in Libya and Syria.

U.S. intervention in Libya ousted dictator Moammar Gadhafi but left the oil-rich state in turmoil. It is now viewed as a failed state and safe haven for several Islamist terror groups.

Syria’s civil war helped spawn the emergence of the Islamic State in 2014.

In a section on Israel, Clinton’s talking points expressed appreciation to Morsi for assertions that Egypt would continue to abide by international treaties and obligations.

“Maintaining peace with Israel is a fundamental shared interest and critical for Egypt’s ability to address its economic challenges and enjoy international support as it consolidates its democracy,” the talking points stated. “We may not have a common view, but we do have a common interest.”

The CIA also covertly backed the Muslim Brotherhood in Egypt, according to Egyptian news outlets. In December 2013, the news website Al Bashayer published audio recordings of a CIA delegation that met with Muslim Brotherhood Deputy Khayrat al Shatir and Brotherhood official Isam al Haddad at the U.S. Embassy in Cairo on Jan. 8, 2013.

The CIA asked the Muslim Brotherhood leaders to open a back channel to al Qaeda “to secure the safe exit of U.S. troops” from Afghanistan.

Additionally, another news outlet, Al-Marshad al Amni, reported that Maj. Gen. Abd-al-Hamid Khayrat, former deputy chief for Egyptian State Security Investigations said the CIA in January 2013 “asked for the help of the MB in Egypt to facilitate… the withdrawal from Afghanistan.” The Muslim Brotherhood agreed to become a “bridge” between the U.S. government and al Qaeda, Khayrat said.

The reports triggered widespread conspiracy theories in post-Morsi Egypt that the CIA was collaborating with Morsi and the Muslim Brotherhood to destabilize Egypt.

The Clinton talking points about the transition to democracy were reflected in a briefing given by a State Department official to reporters the day before the 2012 meeting. The covert police assistance was not mentioned.

A day after the meeting, Clinton stated in remarks at the U.S. Consulate in Alexandria, Egypt, that she told Morsi the success of his presidency and Egypt’s success “depends upon building consensus across the Egyptian political spectrum and speaking to the needs and concerns of all Egyptians—all faiths, all communities, men and women alike.”

Retired Army Lt. Col. Joseph Myers, a former DIA official and specialist on terrorism, said the documents show the endorsement and support of the Muslim Brotherhood government in Egypt was “a fools errand and shows a disastrous strategic naivety.”

“The whole policy initiative to support a Muslim Brotherhood government anywhere is another example of a total policy failure of Secretary Clinton,” Myers said.

“But it also raises deeper questions of who in our government is advising and influencing such reckless and dangerous policies that show no fundamental comprehension of the threat we face from radical Islamic jihad,” he added. “Or worse these advisers precisely understand what they are doing to U.S. policy and Secretary Clinton could not.”