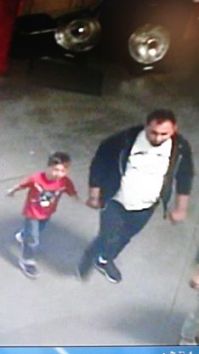 What’s going on in Santa Cruz, a small college town on the central coast of California?

With a small child in tow, a bearded man and two women clad in hijab and chador stole over three thousand dollars worth of razors from the local Costco store.  According to the Santa Cruz police, “One of the women hid the merchandise under a large chador.”  Handy.

The theft was recorded on CCTV. They have clear images of the culprits, who, given the attire of the women, appear to be not only Muslim, but modest and deeply faithful: God-fearing folk, certain to set a fine example for the small boy they had with them.

Fair enough.  Criminals come in all varieties.  Still, what’s with all the razors?  It’s been reported that the Islamic State has instructed its operatives to blend in once they arrive in the West.  If one is trying to go underground it might make sense to shave one’s jihadi beard. They stole enough razors to shave several beards.  Which would be crazy.  But than, so is holding pipe bomb making parties with friends and family in the garage while your baby is napping upstairs.

More likely, they’re just trying to make a buck and intended to resale the razors at the local flea market or on Ebay.  Let’s hope anyway.

But why the censorship by local media? Apparently, KSBW 8, after first reporting the theft on their regular evening broadcast, promptly scrubbed the story; it’s completely removed from their website.

To find it now, with pictures anyway, you’ve got to go to the Santa Cruz Police Facebook page.

Curiously, in describing the theft, the Santa Cruz P.D. accuse the culprits of having “smuggled” the razors out of the store.   Under California Penal Code  Section 487, stealing property valued  at over $950 is not smuggling; it’s Grand Theft.   Seems like something the police ought to know.  Why not say so?

Take a good look at these three suspects: The male holding a child’s hand and two females worked in conjunction and smuggled $3,249.35 worth of Mach 3 Turbo Razors out of Costco. One of the women hid the merchandise under a large chador. Video surveillance,e captured images of the trio in the store on 3/24/16.
Anyone with information about this incident or who may recognize the suspects is asked to contact SCPD (831) 420-5820. Anonymous tips can be sent through our Tip Line (831) 420-5995