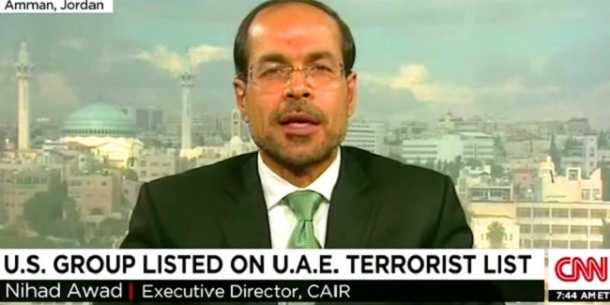 CAIR (Council on American-Islamic Relations) is a Muslim Brotherhood front group, masquerading as a civil rights organization. It’s one of many.

And what is the Muslim Brotherhood?   According to former U.S. Federal prosecutor John Loftus:

In 2014, CAIR, along with the Muslim American Society,  was designated  a terrorist organization by the United Arab Emirates. (U.A.E.).

Curiously, none of this appears to have had an impact on their status in the United States.

So a group once serving as the Arab arm of the Third Reich, and recently deemed to be a terrorist organization by an Arab – Gulf nation, is attempting to influence the outcome of the American presidential election.

Cair Executive Director Nihad Awad thinks it’s possible to garner a million Muslim votes in key swing states to influence the election in support of a candidate he cannot, he acknowledges, legally name.

One senses his audience knows to whom he is alluding.  Any guesses?

Update: The Original video of Nihad Awad’s speech has been taken down.

Apparently, it has been deemed more strategic to keep the public in a state of ignorance, as to the probable involvement of the Muslim Brotherhood in Hillary Clinton’s campaign.

In any case, another video has been found that, while not as revealing as Mr Awad’s, begins to make the point.  It appears to involve gaming the Electoral College in specific swing states.  Perhaps the original will turn up one day.  As it happens, sometimes they do.

This video contains portions of the Awad’s speech, and is revealing in other respects especially as concerns CAIR’s  involvement in “Black Lives Matters”.