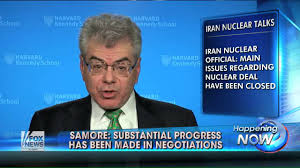 Samore traveled to Argentina in 2010 and pressured her government to provide Iran with Nuclear fuel.   She revealed this at the United Nations:

“They came to ask us, Argentines, to provide the Islamic Republic of Iran with nuclear fuel.“

Why the accelerated — covert push for a nuclear Iran by the Obama White House?

On Monday afternoon, Cristina Fernández de Kirchner, who has served as the President of Argentina for nearly eight years, spoke for forty minutes during the 70th session of the General Assembly. While discussing the nuclear arms agreement involving several world superpowers in relation to Iran, Kirchner dropped what seems like a bombshell claiming that Gary Samore — the former White House Coordinator for Arms Control and Weapons of Mass Destruction under Obama — tried to convince the Argentinians to provide the Iranians with nuclear fuel in 2010.

In light of this year’s negotiations, which have been publicly aimed at limiting the Iranian capability to develop nuclear weaponry, the claim that a senior White House staffer would secretly seek to enrich Iranian nuclear fuel seems troubling. Kirchner claimed in her speech before the UN, however, that Samore urged the 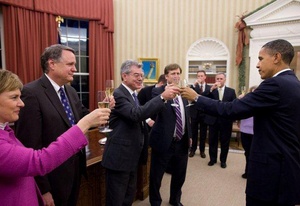 Argentinians to provide Iran with nuclear fuel to enrich a reactor they had previously supported:

In 2010 we were visited in Argentina by Gary Samore, at that time the White House’s top advisor in nuclear issues. He came to see us in Argentina with a mission, with an objective: under the control of IAEA, the international organization in the field of weapons control and nuclear regulation, Argentina had supplied in the year 1987, during the first democratic government, the nuclear fuel for the reactor known as “Teheran”. Gary Samore had explained to our Minister of Foreign Affairs, Héctor Timerman, that negotiations were underway for the Islamic Republic of Iran to cease with its uranium enrichment activities or to do it to a lesser extent but Iran claimed that it needed to enrich this Teheran nuclear reactor and this was hindering negotiations. They came to ask us, Argentines, to provide the Islamic Republic of Iran with nuclear fuel. Rohani was not in office yet. It was Ahmadinejad’s administration and negotiations had already started.

[Transcript translation made available through www.cfkargentina.com]

As Kirchner tells it, the difficulty in agreeing to Gary Samore’s requests speak to the heart of the long suffering history between Argentina and Iran, namely, the still-unsolved 1994 bombing of the AMIA building in Buenos Aires. The tragedy killed 85 innocent Argentinian civilians, and although no one was ever found guilty of the crime, prosecutors have long suspected Iranian involvement. The late Special Prosecutor Alberto Nisman — himself victim of a mysterious death just earlier this year — was adamant in his beliefs that an Iranian-backed Hezbollah militia carried out the attacks.

In this bizarre history of belligerence between Argentina and Iran, it seems peculiar that President Obama’s chief representative for Arms Control and WMDs would argue on behalf of increasing Iranian nuclear capabilities, even if for only fuel. So what happened? According to Kirchner, when Samore was asked to provide the request in writing, all communication from the United States ceased. Kirchner stated, “This message was conveyed and I believe that was the last time, after that communication, that our Minister of Foreign Affairs saw Gary Samore.”

As soon as the essential protocol from the Argentinian government was pushed further — asking for the Iranian fuel transfer request in writing — Samore, she says, disappeared.

In light of the AMIA bombing and subsequent investigations, Kirchner continued, “…Argentina’s contribution to this negotiation process…was impossible. [However] The Minister of Foreign Affairs came to see me in my office, and I remember this very clearly, and I said that if this request were made in writing and signed, we could, after all, cooperate.”

It would appear as if the Argentinian President was outing a high-ranking member of the Obama administration while standing live on the floor of the UN. We reached out to the White House and thus far, they have not returned our call for comment.

Coincidentally, the speech by Argentinian President Kirchner coincides with the release of the anticipated documentary film Los Abandanados, which examines the role of Iran in the 1994 AMIA bombing. The film also highlights the circumstances surrounding the mysterious death of Nisman, who actively devoted his life to uncovering the judicial misconduct following the attack. Nisman was found dead in January at his home in Buenos Aires, hours before he was scheduled to address the Congress of Argentina.